As the Government continues to insist that the worst is over for Ireland Inc, let us consider some headline numbers on the structure of our public spending.

The figures reported below refer to 2008 comparisons, so they omit most of the horrific fall-out from the current economic crisis. as such, these comparisons relate more to the structural imbalances our state is running, not to the recessionary effects. This is worth keeping in mind, for it means that the differences between Ireland and other states reported below, as well as the adjustments required for us to reach sustainable long term equilibrium on spending and taxation sides will have to be put in place no matter what happens to our economy in years to come. It is also worth keeping in mind because the figures reported below underestimate the extent of our post-2008 imbalances compared to other countries that had experienced much less pronounced crisis over 2009.

All data is taken from the publicly available sources - the IMF and CSO - so the Government and our tax-and-spend crowd of Unions-led economists are fully aware of these. Plausible deniability does not apply, therefore, when it comes to our Government pronouncements about its policies and the current position of the Irish economy on international competitiveness scale. 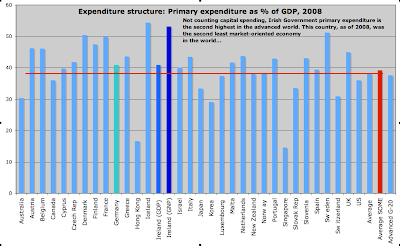 Chart above plots Ireland's position vis-a-vis its peers in the developed world in terms of the overall size of the primary (non-capital) share of public expenditure in the economy. Two facts worth highlighting here: 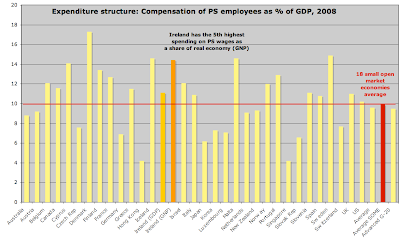 Chart above shows that Irish public sector is clearly one of the most lavishly paid one in the entire developed world. In fact, our public sector wages and earnings swallow over 14.4% of our national income, making Ireland's PS workers the 5th highest paid (on aggregate) in the advanced world. The gap between Irish public sector earnings bill and that for the average SOME is a massive 4.47% of our GNP. Roughly speaking Irish public sector wages bill contains a roughly speaking 48% premium relative to the PS counterparts in similar economies around the world. Clearly, even the reductions in overall take home pay imposed on PS in Budgets 2009-2010 has not erased this premium, especially when one recognizes that since 2008 our GNP has contracted almost in line with the decline in PS pay. 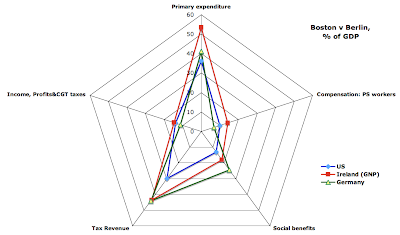 Chart above maps Ireland relative to the US (Boston) and Germany (Berlin) to show just how absurd the whole notion of Ireland Inc being positioned between Boston and Berlin is in the real world. In reality, just one parameter - Social Benefits as a share of GDP/GNP - marks our relative position as being between Boston and Berlin. In every other parameter, we are a basket case of excessive public spending and taxation relative to both the US and Germany.

With the above data in mind, what adjustments in the budgetary positions will be required to bring Ireland into the exact position of being between US and Germany to reflect our stated competitive benefit of being an economy that can facilitate trade and investment flows between the two giants - the EU and US? 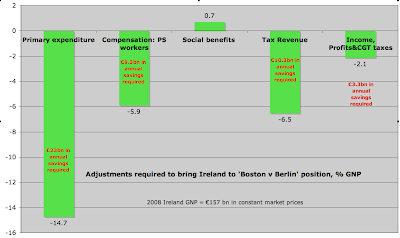 To restore our competitive balance we need:
There is absolutely no ground for our Government and policy leaders' claims that Ireland is strongly positioned between the low(er) tax US and high(er) tax Germany as a competitive destination for exports and investment arbitrage. In fact, due to the Government-own policies, fiscal and tax imbalances created in this economy mean that we are, at a macroeconomic level, grossly uncompetitive relative to

Posted by TrueEconomics at 12:02 PM

I find these figures very misleading.

This means government accounted for a little over a third of the economy in 2008 -- well below levels of continental Europe.

Or what am I missing here?

Our real problem seems to have been a failure to devise a rational taxation system not dependent on bubble revenues from property sales.
People on average incomes pay minimal income tax and no local taxes (apart from bin charges); we also have no taxes on property owned. Contrast that with any other developed country including the US.

As for cutting govt. expenditure by 23 billion, get real! You'd have to sack every single public sector worker in the country.

It wasn't just tax receipts that were inflated by the credit bubble, GNP was too. Take the massive private sector borrowing out of the picture and government spending as a proportion of the economy would have been much, much higher.

The same numbers hold per IMF table 3a from "From Stimulus to Consolidation: Revenue and Expenditure Policies in Advanced and Emerging Economies" Prepared by Fiscal Affairs Department, Approved by Carlo Cottarelli April 30, 2010.

The only caveat supplied by the IMF is that Irish figures (as well as all European countries figures) are supplied by the Eurostat, with "capital spending proxied by gross fixed capital formation".

Comparisons for other countries are given in the table here: http://trueeconomics.blogspot.com/2010/05/economics-16052010-imf-on-fiscal.html using actual GDP/GNP gaps. Averages are given below.

IMF figures are exactly confirmed in the Stability Programme Updates from Budget 2009 (table 7, line 7: linked here http://www.budget.gov.ie/Budgets/2009/2009.aspx) and you can see actual figures for gross expenditure for 2008 provided in the Supplementary Budget 2009: Macroeconomic and Fiscal Framework document (http://www.budget.gov.ie/Budgets/2009Supp/2009Supp.aspx - see page 17 of the document). This lists provisional outrun for 2008, Gross Current Expenditure of €53.475 billion, plus Gross Capital Expenditure of €9.048 billion, for a total Gross Government Expenditure of €62.523 billion.


Now, per your conjecture about our tax system:
1) I agree - it is imbalanced too much in the direction of windfall transactions taxes. However, stamp duties are taxes on property, so it is incorrect to claim that we had no property tax. it simply was a wrong tax.
2) Our tax burden is not that much different from other countries, and in fact by many metrics, our state already collects too much in taxes in some areas.

Detailed analysis and comparatives for our tax system relative to the peer states are supplied here: http://trueeconomics.blogspot.com/2010/05/economics-19052010-euro-rescue-and-tax.html

Lastly, I actually would not compare Ireland to the entire Eurozone, or EU. I would compare Ireland to our real peers - small open market economies that we compete against (and yes, I do recognize that competitiveness is more than just tax and expenditure story).

Thanks for commenting and reading.

Mack, thanks - spot on. Note that our GDP was also inflated by it - as some of the revenues accruing to MNCs is raised from the Government spending and the private sector boom.

after reading this article and seeing those charts and figures, and now the country is in a knot over a further €3 billion in cuts, I think it's time to leave the country.

No doubt about the figures , a graduated cut in Public Sector Salaries equating to 6 billion this year from the top end to 30,000 and 3 billion next year , and an incentive to work maximum social welfare no matter how many children 17500 three billion cut, and bring in to tax net the fifty percent not paying tax however pigs will fly or Irish people will fly to the moon on a FAS spaceship TB2G I emigrated.Resigned from a six figure permanent position out of disgust.

Excellent report, can I also include the danger of the looming national debt.

From the An Bord Snip report, they state that the cateogry that consists mainly of provision for debt-servicing, that the figures show that Central Fund current expenditure will rise to €11.2bn by 2013 from its 2008 baseline of €3.9bn.

Does this mean that our interest repayments in 2013 could be 11 billion? Do you know what the central fund expenditure consists of?