Having covered the aggregate debt levels (here) and Government debt (here), now its time to move on to Banks. And some surprising stuff the numbers are throwing: 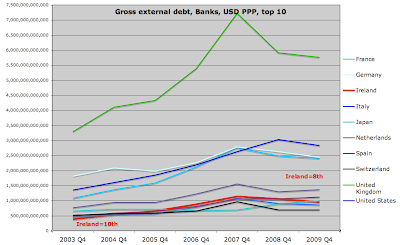 The UK is clearly an outlier in the entire global series. This is, of course, due to two factors - firstly, the international hub position of London, and secondly - the over-reliance of European and other non-US economies on banks lending (as opposed to the much more significant role played by equities and bonds in the US). Irish reliance on banking sector is also formidable. Also notice that
These two facts indicate that Irish banks unable to deleverage outside the state aid support, which, of course simply means that instead of writing down their debts, they re-loaded them onto us, the taxpayers.

Taking out the UK, as an influential outlier: 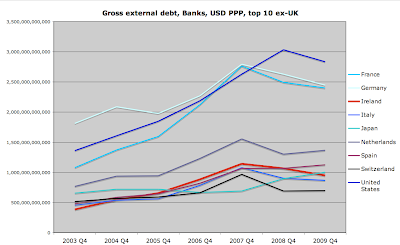 The remarkable part of the above picture is that virtually no banking sector amongst the top 10 debtor nations has managed to deleverage to anywhere near pre 2006 levels. The crisis, folks, has not gone away - it has been covered up with a thick layer of state-issued liquidity. In other words, printing presses, not structural reforms, what has been working over time to 'resolve' the crisis. And this can only mean two possible outcomes: high inflation or renewed crisis. Since the former relies at least on some recovery in consumer ability to take on new debt, the only way we can avoid a double-dip crisis scenario is if consumers have deleveraged more than the banks did during the last two years. I will be moving on to the real economy sector in my later posts, but for now let me give you an idea of the findings - there was virtually no deleveraging of consumers. Instead, the real economy is now deeply in debt itself. 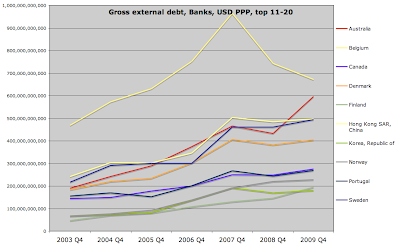 Back to the banks for now. Chart above shows that the story of banks deleveraging is even worse in the second tier of debtor nations. In fact, with exception of Belgium, no banking system amongst the 11th-20th ranked debtor nations has managed to reduce the levels of debt incurred during the bubble formation. 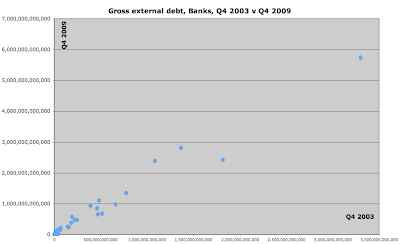 Zooming onto the main group of countries (ex-UK): 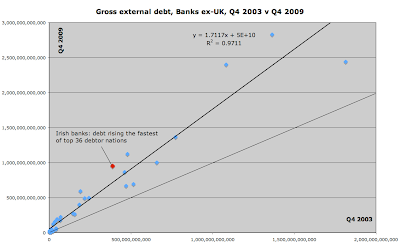 All of the banking sectors in top 36 debtor countries are carrying more debt today than they did in Q4 2003. And Ireland once again stands out as the most debt-dependent country in the group when it comes to the rate of growth in banking liabilities since 2003.

So let us summarize the findings so far:
From the world economy point of view:
Next, I will be looking at the data on total debt across 36 economies. Stay tuned.
Posted by TrueEconomics at 5:26 PM