The last two weeks have thrown into the spotlight the reality of the troubled global economy we will be facing for years to come. This reality comes not the courtesy of the reckless banks and excessively greedy speculators. Instead, the 'new normal' is being powered by the same agency that many have come to see as the agent of salvation to the excesses of the private markets - the state.

By all numbers, world's largest governments are now broke. Insolvent and unable, due to political paralysis, to deal with the problem they face. This problem is compounded by the fact that in addition to the governments, the real economies are also broke. Unable to bear the weight of massive debt accumulated during 2003-2007 period, plus the expected burden of the government debts. The banks might have started the process over the period of 2006-2007, but before they did so, world governments were firmly on the path of unsustainable financing. The follies promoted and financed by the public purses in the developed world, which consumed hundreds of billions of taxpayers money, included a wide range of activities - from expansions of the public sector, to vast subsidies on environmental measures (most going to the least verifiable activities aimed at combating climate change instead of basic research, new technology development and investments in quality of life improvements), to pie-in-the-sky global economic development agendas and third world debt workouts. Geopolitical grandstanding, from aspirational 'democratization' to fictional 'unifications' also contributed significantly to the problem.

Now, the very economies that jostled for the positions of global power are suffering from debt overhang. And yet, rhetoric has not changed. Like a shopaholic unable to stop pulling out his credit card at every till in a shopping mall, world's leading economies cannot resist the temptation of vastly expanding public expenditure. In short, the governments around the world are now clearly exhibiting the same pattern of addictive behavior toward debt as a heroin junkie. The world has a debt wish!

Symptoms first. I took 36 countries data from the joint IMF/BIS/World Bank database on external debt positions - these countries represent world's largest debtor nations. Here are the charts (note, I will be publishing these charts over a number of posts in the next couple of days, so do come back for more). 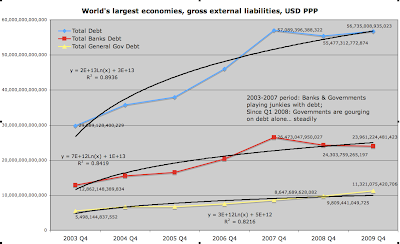 The first chart above shows the overall composition of the total debts held by the world's largest 36 debtor nations. There are several apparent trends shown in this data:
A closer look at banks and governments 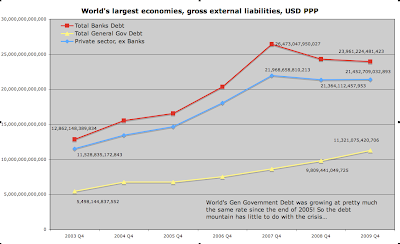 The following facts arise from the above chart:
Thus, world's largest debtors (and incidentally largest economies) remain exceptionally weak when it comes to their real economic activity reliance on debt financing.

And now on to Ireland: 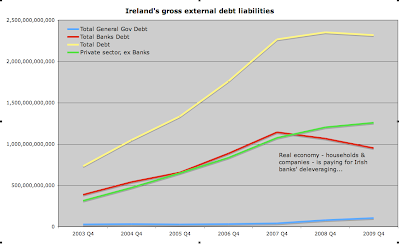 The country that, according to the Government, has done so many things right in 2009 has... well:
In short, Irish debt position is deeply sicker than that of the rest of the largest debtor nations.

At this junction, data calls for some comparative analysis of the various debtor nations. This will be the subject of my next post on the topic. Tune in...
Posted by TrueEconomics at 9:21 AM

So total world debt stands at 60 quadrillion dollars?! I wonder how that compares with total GDP, and also to whom is that owed?