Update below: stabilization or not?

Daft rental report is out today. Some interesting reading of the numbers. As predicted by me on the foot of January data - when the prevailing media song was about 'stabilizing' rental markets - rents are continuing their Southward trajectory.

So no relief in sight. Remember, in this country we call things 'stabilizing' when the rate of fall slows down... Pardon my foreign language skills, but I'd say things are stabilizing when we reach the bottom. In other words, when the numbers above stop increasing in absolute value.

Let me reproduce for you the seasonality chart I did back on the foot of January data: 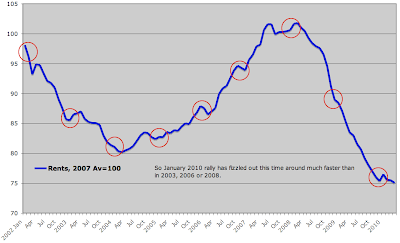 You can see what I meant by January rally back then, and you can see that things have fizzled out since then. When one realizes that since 2008 we virtually had no new units coming into the rental market, this figure looks even more depressing. We are experiencing a real decline in demand as jobless families are dropping out not out of the property market, but out of the rental market! Emigration is, no doubt, also playing its part. All of which means that those first time buyers... well, are rapidly becoming first time lodgers in their moms homes.

What about the dynamics going forward? 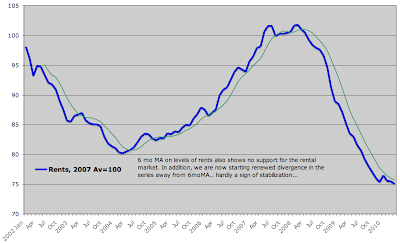 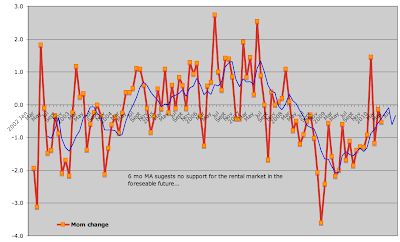 Well, neither levels of rents, nor rates of change in rents are showing any stabilization. Both series are trending in the negative territory, suggesting that pressure on rents might remain, adjusting for seasonality, for some time. That said, positive monthly territory for now remain in sight, both in moving average terms and in rate of change terms. So expect shallow moves, with a risk to some downside.

Update: Since earlier today, there have been some debates going on as to whether Daft data shows any stabilization in rents. As I asserted earlier, relative to peak, monthly march downward continues (see table above) uninterrupted (once seasonality is factored in for January) and in absolute terms for all 4 months. But what about year on year changes? Table below shows the results:

So per annual changes, 2 conclusions are warranted:
On the net, I do not see any stabilization so far. Oh, and just in case you wondered - Daft data also shows uptick in properties available for rent... Hmmm...
Posted by TrueEconomics at 7:50 AM