So continuing with the IMF Fiscal Outlook report data, building on the three previous posts: Part 1 (here), Part 2 (here) and Part 3 (here), take a look at another wonderfully ludicrous myth perpetrated by the Irish Left: the Myth of Underinvestment in Public Health in Ireland.

The Myth of Healthcare has two parts to it: Part 1: "Irish Government has under-invested in Irish public health." Part 2: "We need to ramp up Health spending to achieve better services". 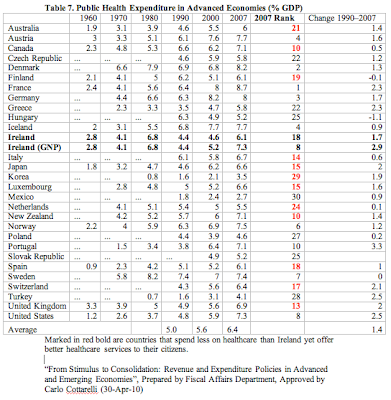 The data above is taken from the paper that formed the background to the IMF report, titled “From Stimulus to Consolidation: Revenue and Expenditure Policies in Advanced and Emerging Economies”, Prepared by Fiscal Affairs Department, Approved by Carlo Cottarelli (30-Apr-10). My calculations cover GNP comparatives and ranked results, plus the change between 1990 and 2007. IMF reports changes between 1960 and 2007 and 1970 and 2007. I find these data problematic, because of a large number of gaps in the data for these years. In addition, I would have trouble comparing Ireland between 1960 and 1970 through 2007 to majority of the countries on the list, as arguably, Ireland was not a developed or advanced economy in the decades prior to 1990.

What the table above clearly shows is that:
The problem, of course, is that we cannot perfectly measure the output we get for the money we spend on public health. Alas, somehow, I know that any foreigner living in this country runs for the airport the minute they get sick, desperately trying to avoid HSE's kingdom. French, Italians, Germans, Belgians, Spaniards, Czechs, Dutch - you name a country within the EU - all have been dreading the need to face our 'centres of excellence' where medical staff needs to be reminded to wash their hands and lines of sick patients stretch the length of the lines to the infamous Lenin's Tomb's in the hey days of the CPSU.

It looks like, according to hard data, this adverse reaction is not due to the lack of cash in the health system...

Posted by TrueEconomics at 9:10 PM