Underlying the unworkable logistics of the Euro-bond that Brussels is planning to deploy to contain the spillover of the fiscal crises in PIIGS, there is a pesky issue of the past record of the currency block management of its finances.

Here are some historic comparisons from the IMF latest GFS report worth highlighting. 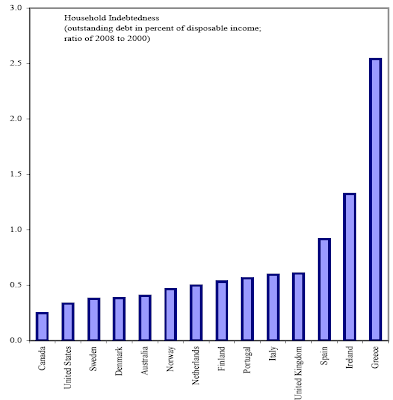 Now, spot the odd ones in the above chart? That's right - the non-Euro zone countries are the ones with the lowest indebtedness of households in their economy. In other words, no matter how much the Euro area leadership talks about the US being the cause of the current crisis, data simply shows that the US - despite all its problems - has had far less of a bubble in overall debt terms than Euro area. The only reasons Germany does not figure amongst the countries with the weakest households are:
But in assuming all this debt, were Euro area households buying productive assets (as opposed to the Americans, who, per our Europhiles' assertions were all playing a property Ponzi game)? 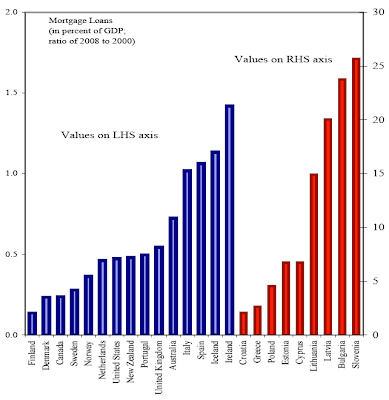 Oops. Not exactly. While Americans were buying homes (fueling their own bubble), Europeans were buying... homes and public sector spending goodies. But may be, just may be, Euro area members were more prudent in buying homes than the Americans, who stand accused of causing the financial crisis of 2007-2009? 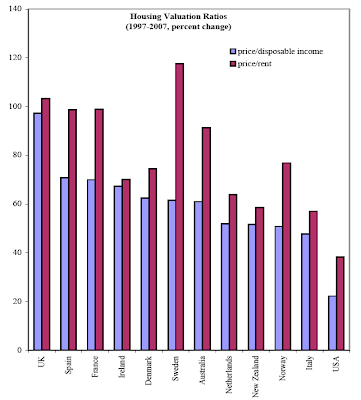 It turns out that this was simply not true. Chart above shows just how far more leveraged were the Euro area states compared to the US in terms of two main parameters of house prices sustainability. 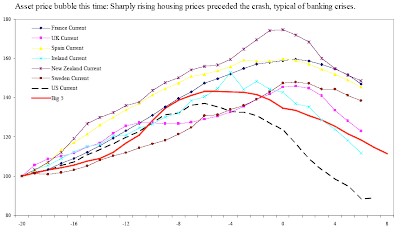 And the same is true for overall asset valuations.
Oh, and those prudent lenders - the Germans and the rest of the Euro pack banks? 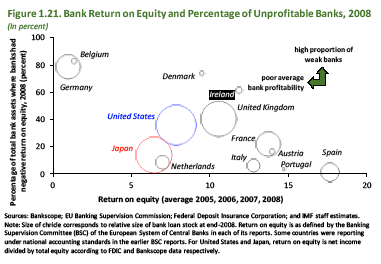 It turns out the US banks were actually much better off throughout the bubble formation period in terms of their lending and profitability than... hmmm... Germany and Belgium. Who could have known, judging by Mrs Merkel's hawkish statements as of late?

Now, take a look at the total external indebtedness of the Euro area... Recall, the US and Euroarea both have relatively similar GDP... 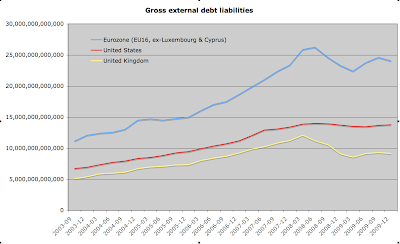 So suppose the EU Commission issues common bonds (and assume it places them in the market) to underpin PIIGS plus Belgium, the Netherlands and Austria - the sickest puppies of the Euro area. That would require bonds issuance to the tune of 20-30% of these countries outstanding public debt. Which means that the unified bond issuance volumes will be in the region of USD1 trillion, pushing Eurozone's combined indebtedness to over USD25 trillion. Does anyone really think this is a 'solution' to contagion or a surrender?
Posted by TrueEconomics at 9:51 AM

One needs to be extremely careful with the house price figures that you provided here.....

On another issue, much of the house price data contains cross-border ownership within the Euro zone, where people in the Netherlands purchased homes in Spain with a mortgage underwritten in the Netherlands or even a third country.....this makes the price/disposable income figure highly susceptible to bias in countries like Portugal and less biased in the case of Ireland where there was relatively little foreign investment in the housing markets....