This is the fourth post in the series covering world debt issues. In the previous post I provided analysis of the aggregate debt levels for 36 largest debtor nations (here) and for the Government debt (here) and the banks debt (here). The current post looks at the country-level data. 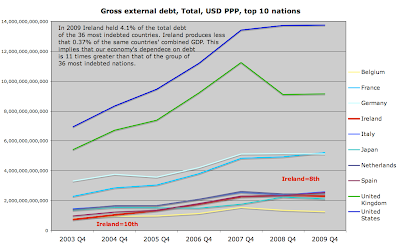 Chart above plots the evolution of the Gross External Debt for top 10 debtor nations. The US, predictably leads the way. Remember - these are absolute debt volumes, not relative to GDP. UK comes in second. While the UK Gross External Debt has actually declined in the duration of the crisis, that of the US remained on the rising path, with current GED levels in the US above the 2007 bubble peak. The same is true of the third (France) and fourth (Germany) countries.

Ireland is a remarkable member of this list, coming in ranked 8th largest debtor nation overall in the world in Q4 2009 - up from the 10th in Q4 2003. This clearly shows that in the Irish case, the debt bubble has been forming in the economy well before 2003. My previous research suggests that Irish debt bubble has started forming back in 1998-1999, the last year when our current account registered positive balance, as chart below illustrates: 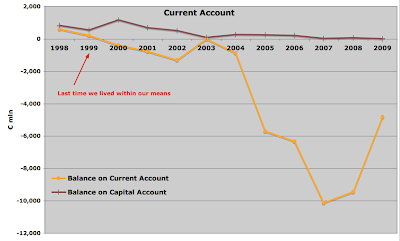 What's even more interesting is that in 2009 Ireland held 4.1% of the total debt of the 36 most indebted countries, while producing less that 0.37% of the same group of countries' combined GDP. This implies that our economy's dependence on debt is 11 times greater than that of the group of 36 most indebted nations. Put into household finances perspective, we have managed to borrow ourselves into a complete corner, whereby our indebtedness is systemically important to the world, while our economic existence is not. If not for the euro, folks, we would have bailiffs from the IMF calling in.

Having borrowed more than Japan and Belgium, we are also leagues ahead of other, much larger economies in terms of GED: 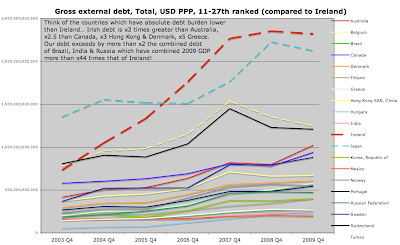 Think of it: Irish debt is
And we are the 'rich country' that is contributing to international aid and relief for the HIPCs (Highly Indebted Poor Countries) and whose Presidents (current and former) are jet-setting around the world dispersing piles of taxpayers' cash in aid and preaching economic reforms. Comical or farcical, folks? 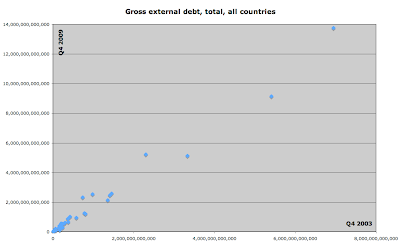 Predictably, the US and UK are outliers, so let's zoom on the data ex-US & UK: 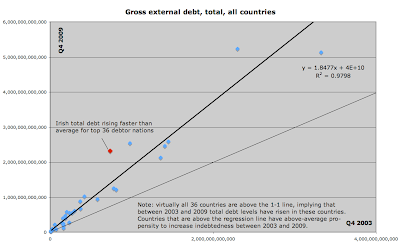 Majority of the 36 countries which are world's largest debtors locate above the 1-1 line, implying that between 2003 and 2009 total debt levels have risen in these countries. Countries that are above the regression line have above-average propensity to increase indebtedness between 2003 and 2009. Ireland sticks out like a sore thumb - sporting the largest Gross External Debt increase of all comparators, relative to the starting position in Q4 2003. The overall relationship between the starting debt levels and the current ones is extremely strong - something to the tune of 98% of variation in current debt positions is explained by the starting ones, which simply means that all 36 countries are habitual addicts to debt. Again, Ireland is the leading addict in the club.

Of course, do recall that GED includes 3 sectors in it - Banks, Government and the rest of the economy. Banks and Government, as I've shown in the previous post, are linked: 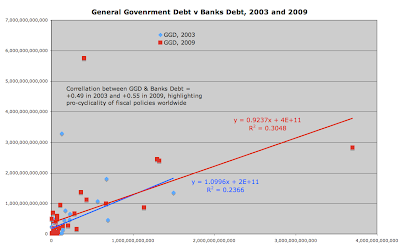 But the link is not particularly strong: correlation between GGD & Banks Debt was +0.49 in 2003 - positive, but not exceptional. It rose to +0.55 in 2009, reflecting the crisis measures transferring taxpayers wealth to the banks. But this too is not dramatic. A relatively modest increase in correlation between 2003 and 2009, plus the fact that we already had a positive correlation back in 2003 highlight pro-cyclicality of fiscal policies worldwide.

Now, let's put the GEDs together, for comparatives: 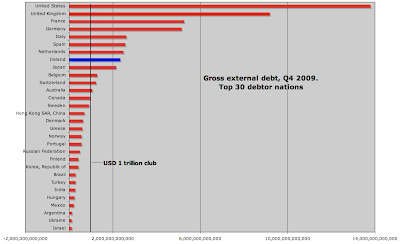 Ireland is the member of USD1 trillion debt club, despite having a substantially smaller income than any of the countries around it. Even removing IFSC out of this equation still leaves us in the club, pushing our total debt to the 12th position worldwide.

In the next post, I will look at the debt levels relative to countries' GDP, so stay tuned.
Posted by TrueEconomics at 8:07 AM

The house of cards is getting larger by the minute as we learn from you how shaky the whole system is.I am pretty certain than none of our Irish politicians understand 25% of what you are explaining in this series of papers.Constantin the russian trader knew what was going to happen to the value of the Greek bonds that he bought cheap.What is going to happen when the dominoes start falling and the PIIGS are on the floor?? Has anything approaching this scenario occured in recent history? As always great work!