You have to feel for some of our desperate cheerleading squad of ‘analysts’ who toil for some of our banks and stock brokers. These folks are clutching at the straws trying to find something to cheer about. Case in point – latest data from the Irish Exchequer, which was heralded as showing ‘stabilisation’ and even ‘improvement’ in ‘funding conditions’ and ‘headline deficit’.

Putting aside the fact that most of these analysts have no real idea what these terms really mean (and in some cases, neither do I, for they mean preciously nothing in the real world of economics), the fault in their logic is an apparent one:

They say: ‘Irish exchequer receipts are finally coming closer to the Budget 2010 projections. Therefore, things are improving or stabilising.’

I say: ‘Statements like this are pure bollocks, folks. Just because DofF has finally caught up (somewhat) in its forecasts with reality, does not mean reality is getting any rosier.’

Here is the evidence that I am correct. Forget the Exchequer forecasts, and look at the actual data. 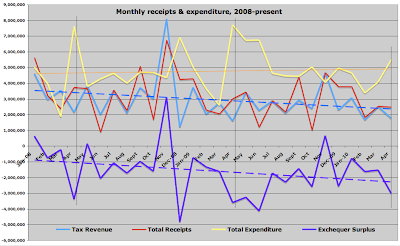 Chart above shows that:
Translated into cardiology, the patient now has an accelerating erratic pulse reaching beyond the norm, and continuously falling blood pressure. Just as Good Doctors Brian & Brian are talking about discharging...

To see if things are indeed improving (or stabilizing) as our ‘analysts’ suggest, let’s put back to back receipts and expenditures for the last three years in one chart: 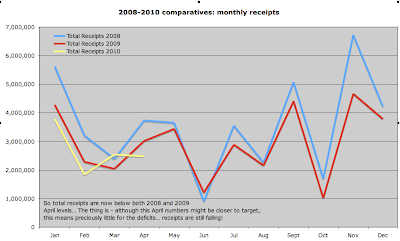 Clearly, our total Exchequer receipts (and recall, these are boosted by abnormally higher non-tax revenue) are now below those for April 2008 and April 2009. Indeed, only once so far in 2010 have receipts rose to above corresponding monthly levels for 2008 and 2009 – back in March, when the Exchequer booked some of the backed receipts on VAT, VRT and Excise. 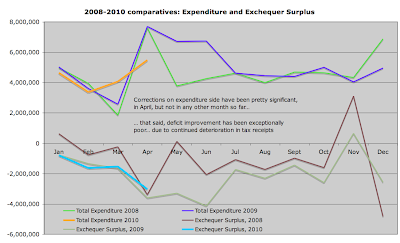 Chart above shows that the Exchequer did indeed achieve some reduction in spending in April 2010. But,

This miserably low level of achievement in our battle to restore Ireland to solvency is, of course, fully visible in the above chart, once one considers the Exchequer surplus performance.

Posted by TrueEconomics at 6:14 PM

I agree that the overall picture is still appalling, but I do not think the April snapshot is not as bad as you portray.

If total receipts is the sum of tax revenue, non-tax revenue and capital receipts, this gives the total of c.€2.5 bln shown in the first diagram.

This includes the €617 mln contribution to the Sinking Fund. This is not a receipt but is the transfer of money from the current to the capital account and is thus somewhat misleading.

Also apparent stabilisation in this has not being because of been able "to squeeze more out of the semistates". Last year the semi-states paid dividends of €146mln to the Exchequer. They have paid no dividends yet in 2010.

About 90% of capital receipts so far this year, €790 mln out of €874 mln, have come from the EU's FEOGA Guarantee for agricultural and rural development measures.

Non-tax revenue at €159 mln has been insigificant so far this year. At the same time last year it was €162 mln so no major change. The rest of the year will be more interesting though.

The first is an expected increase in the Central Bank surplus from €290 mln to €640 mln. The second is the anticipated receipt of €1,000 mln as payment for the Deposit Guarantee Scheme. We have yet to see if these targets will be met. Other non-tax revenues are relatively insignificant.

With these in mind I think the focus when looking at Exchequer Receipts is tax revenue.

It would be far better to compare the April tax revenue from this year to the equivalent tax revenues from previous Aprils. Here we see that tax revenue is rising!

We won't start blowing the trumpets just yet. Most of this increase is due to VAT and Corporation Tax which as stated are not usually important for the April tax figures. The increase could just be down to timing issues rather than indicative of any general upswing. However note that April receipts for Income Tax, Excise Duty, Stamp Duty, Capital Acquisitions Tax and Customs Duty were all ahead of the amounts collected in April last year. Table here.

I agree that things are bleak on the revenue side and still well behind last year but there is a slight sense of stability beginning to emerge.

On the expenditure side I cannot agree that expenditure is "heading up". Using your measure of Total Expenditure so far this year we have spent €17,617 mln. By this time last year we had spent €18,962 mln, a drop of €1,345 mln or 7%. Obviously, most of this has been on the capital rather than the current side, but both forms of expenditure are below last year's levels.

Finally I do agree that the "Exchequer deficit has gone up in April" however it did not do "so at a rate virtually identical to April 2009". In April 2009 the deficit was €3,596 mln for the month. This year the April deficit was €3,019 mln.

Although still vast, the deficit this year was €577 mln less that racked up in the same month last year. More on the Exchequer Balance here.

Seamus, superb note. I agree with most. I stand corrected on the semi-states. On tax revenue relative to trend, that is true - April would be below the trend, and it is this year in a better position than in 2009, relative to trend. But it is significantly below the trend, which means that there is no sign of departure from trend. The trend is still down and January-April figures have not changed that.

Tax revenue is up but how much of this is due to April 2009 and Budget 2010 measures, so we are not exactly looking at like-for-like.

On expenditure side - I never said that expenditure is going up. I noted that the rate of decline is simply too shallow.

The rate of deficit accumulation was 97% in April this year against 120% in April 2009. It was 879% for the first 4 months of 2009 and 793% for the first 4 months of 2010. A difference in slope, therefore is less than 10% on 4 months period cumulative deficit. I'd say it is pretty negligible, especially for the amount of hot air being produced about 'stabilisation' and 'improvements'.

Lastly, you might be right - and we might be seeing some stabilisation. The point is, a patient stabilised at a flat line is dead. Not 'stabilised', but dead. Stabilisation has any meaning if and only if the levels at which we stabilise signal some sort of meaningful potential improvement - alas, with Croke Park etc there is little hope for that...

"I say: ‘Statements like this are pure bollocks, folks. Just because DofF has finally caught up (somewhat) in its forecasts with reality, does not mean reality is getting any rosier.’""

I had to reread that statement before tears of laughter blinded me.
This blog has become essential reading for it's candour, let alone for the quality and candour of the analysis.

The truth will out, as they say but if it doesen't, GTCost will root it out.

Spaceba and keep it up.