So the Euro has hit 1.219 against the USD last night and has been bouncing erratically throughout today. The markets are flashing red across pretty much entire listings on the back of German 'talking tough' to the speculators. Rumors of Greeks contemplating an exit from the euro are swirling across the forex traders'-frequented blogs. ECB has abandoned all caution and previous policy mandates and is now pumping euros out of FX markets. Sterilizing Europe's economy into a liquidity crisis, before the insolvency crisis is resolved.

In short, there is a clear lack of conviction in the markets about the Euro area plans for more fiscal discipline, as well as a general apprehension about the bans of naked shorts. This is a direct corollary of the 'rescue' package and the political rhetoric that surrounded German Government decision to back the PIIGS - or more aptly BAN-PIIGS - debts. Yesterday, John Cochrane of UofC, my old professor - had a superb analysis of the whole circus (here).

Of course, banning naked shorts for their alleged role in causing market panics is like banning oxygen for its role in causing fires. Short sales positions are about the last bastion of transparency in the murky waters of sovereign finances.

But take a look as to why the entire package of 'fiscal oversight' proposed by the EU has no legs.

First there is an argument to be made that the 'new package' is really 'old news'. In effect it simply front-loads the Stability Programme Updates reporting (currently submitted to Brussels for approval ex post adoption of the budgets). In theory, supplying SPU statements prior to the budget is supposed to provide for (1) time to adjust budgetary positions in response to the Commission criticism; and (2) a chance for 'peer-review' of the budgetary proposals. Apparently, no individual lines of either spending or taxation will be considered, but instead, the headline figures (macro side) will be looked at.

What's wrong with this picture? A lot.
Notice, I am disregarding the longer-term economic side of the proposal. The EU Commission, as well as many peer states in the review process will have a heavily pro-tax Government spending-favoring and economic growth retarding policies. The Commission, alongside many peer member states consistently believe that budgetary / fiscal health is assured when tax revenue equals tax expenditure (roughly speaking). And they believe that more expenditure is a good thing. Thus, the process is likely to be biased heavily in favour of high-tax, high-spend economic development model. Of course, there isn't a country on earth that has been able to deliver such a model while maintaining dynamic economy. Are we settling Europe into a slow decay model that suits declining demographics of the Continent?

Here is the comparative table on tax revenue collected by the various advanced economies in the boom year of 2007. Notice that the countries currently in trouble - the BAN-PIIGS (Belgium, Austria, Netherlands + PIIGS): 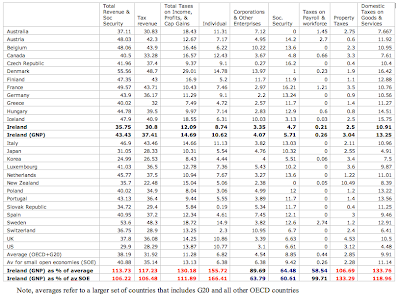 What does this analysis tell us?
All of this means that the deficits are structural. And that the debt accumulation was not only visible well before the crisis (which of course means that SGP supervision has failed) but was also caused by the expenditure side of the Government balance sheets.

Remember, these figures are from the boom-time 2007! And take a look at Ireland, expressed in GNP terms. The table below is self-explanatory:

So we do live between Boston and Berlin, folks? And we do have exceptionally low tax burden? We really do need more the Brussels-styled fiscal discipline?
Posted by TrueEconomics at 7:12 AM

Interesting data. However, one problem with taxation data of this kind is it does not take into account the distribution of taxes inside a given country, even taking in such fields as yours, e.g Domestic taxes on Goods and Services. Unfair taxation burdens on the lower paid result in less money flowing into the economy, while less or no taxation of the wealthy can mean wealth flowing out of the country or into damaging property bubbles. So taxation totals from country 'A' where wealth is not taxed and the poor are unduly burdened cannot be compared with taxation totals from country 'B' where wealth is taxed and the poor are not unduly burdened. Two countries with an equal tax take could be Botscama in Africa or Irelendu in Europe, guess which tax regime in each so the taxation data doesn't tell us much about the economic well being of the country.Similar skew where taxation as in Ireland's case comes from property taxation. So, while the data is interesting, more charts required perhaps to look at countries with a higher tax take, such as Sweden, both in terms of the burden shared across the whole population and in relation to their relative health compared to countries with a different distribution of tax across the economy. In relative terms, charts should graph from an economic viewpoint is it better to tax the rich or to tax the poor? Or, could such charts show by way of greater tax harmonisation, should, for example, the European Commission insist on a reduction of taxes in favour of a common VAT valued added across the board tax.

Powerful video presentation here by Harvard and Oxford historian Niall Ferguson on the history of sovereign debt crises.
.
A thorough explanation of what we are going through now, and what may lie ahead ………
.
http://www.piie.com/events/event_detail.cfm?EventID=152&Media