This is the fifth post in the series covering world debt issues. In the previous posts I provided analysis of the aggregate debt levels for 36 largest debtor nations (here) and for the Government debt (here), the banks debt (here) and the country level data (here). This post puts things into comparative perspective.

Before we begin, however, let me quote from today's Financial Times: "On my estimate, the total size of a liquidity backstop for Greece, Portugal, Spain, Ireland and possibly Italy could add up to somewhere between €500bn ($665bn, £435bn) and €1,000bn. All those countries are facing increases in interest rates at a time when they are either in recession or just limping out of one. The private sector in some of those countries is simply not viable at those higher rates."

Notice the numbers Wolfgang Munchau quotes above, and the countries he includes in the end-game rescue package. Ireland, figures in marginally - the last in line. Yet, what you are about to witness puts a different order on the potential default scenario within the PIIGS. 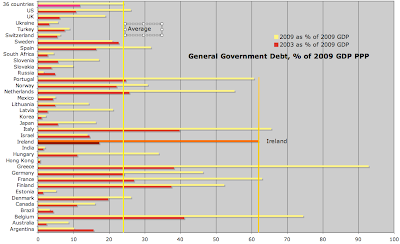 Chart above shows General Government Debt as percentage of GDP. Note, I decided to play 'fair' with Brian Lenihan here - he seemingly cannot understand the GDP/GNP gap, so let us not challenge him too much in his job and use GDP as a benchmark. Per chart above, as of Q4 2009 we had a 62% ratio of GGD to GDP. This puts us into a 'sound' fifth position in the group of world's most indebted 36 nations, behind such 'sound' public finance countries as
Note, this is GGD nomenclature of the IMF/BIS/World Bank framework, which is slightly different from the Stability & Growth Pact methodology deployed by the EU, but unlike the EU's methodology, this one is comparative across the world.

Nothing to brag about here, folks. Fifth. And rising faster than France's or Italy's or Belgium's... 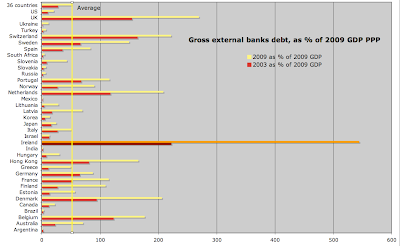 Chart above puts us into comparison in terms of banks' debt - need any explanation here? Oh, yes, we are the most indebted nation in the world by that metric. Worse than this. Suppose we chop off the IFSC (roughly 60% of the banks & 'other' credit institutions' debt). We end up being - the 3rd most indebted banking system in the world.

Of course, in the end it will be the real economy of Ireland - including our corporates and households - who will be paying for Brian Cowen's policies (GGD) and for the banks (Gross Banks Debt), so perhaps here Ireland is doing well? There has to be hope somewhere? 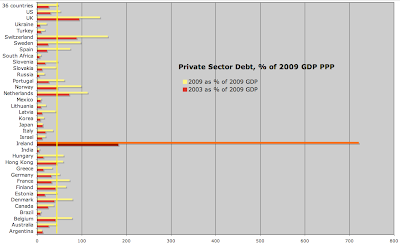 Oops, not really. In terms of private (non-banks and non-Exchequer) sectors debt Ireland Inc is actually in worse shape than it is in terms of banks and the Exchequer (which of course begs a questions - what are we doing rescuing banks while the real economy sinks?). Notice that we occupied this dubious first place in the world back in the days of 2003 as well, and part of this is IFSC as well - pension funds and investment funds. But the amount of debt we piled on since then is purely spectacular.

And so now, down to the main figure - the combined external debt liability of Ireland relative to other most indebted nations: 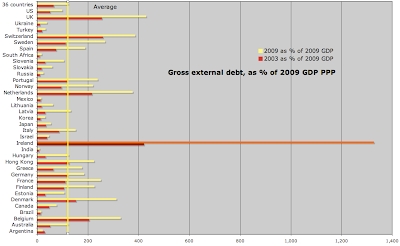 I bet the unions who are calling for more borrowing to finance more growth (the irony of ironies is, of course, that they were so loudly opposing 'growth for growth sake' during the Tiger years) want Mister Lenihan to pull out the state cheque book...

Now let me slightly digress from Ireland and focus on the US. Per above data:
Now, for all Messrs Lenihan and Cowen talk about how the US caused Irish crisis, somehow the real data shows nothing of the sorts... Instead - the real data paints a picture of Ireland deeply sick by all fiscal and financial standards back in Q4 2003. If you go back to those days, really, there were only few economists who warned about some aspects of this problem - myself, Morgan Kelly inclusive. But there was only one economist who consistently argued back then that the entire picture of the Irish economy was wrong. It was David McWilliams. It turns out - he was right!
Posted by TrueEconomics at 4:44 PM