Keeping in mind that the OECD is a cooperative international body (aka not known for taking strong positions on anything, save lunch menu), here's Paris-based boffins' latest outlook for the global economy in 2014: 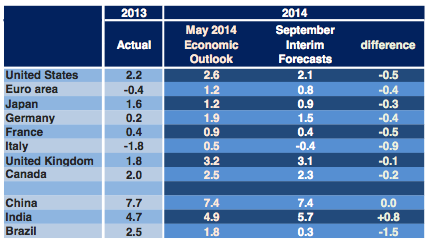 Everyone is downgraded, save India. Poor Italy got blasted - forecast for 2014 growth is now 0.9 percentage points lower than back in May and the 'powerhouse' of the euro area, Germany, is expected to grow by just 1.5% this year despite booming current account. 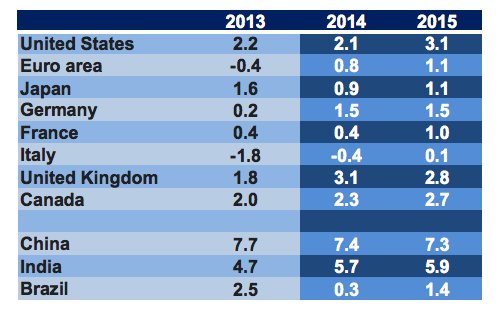 OECD expects euro area to grow at 1.1% in 2015, which is slower than its forecast for the common currency area for 2014 produced back in May 2014. In other words, the expected 'new' recovery is worse than expected 'old' current outlook.

And world trade slowdown is now pretty much structural: 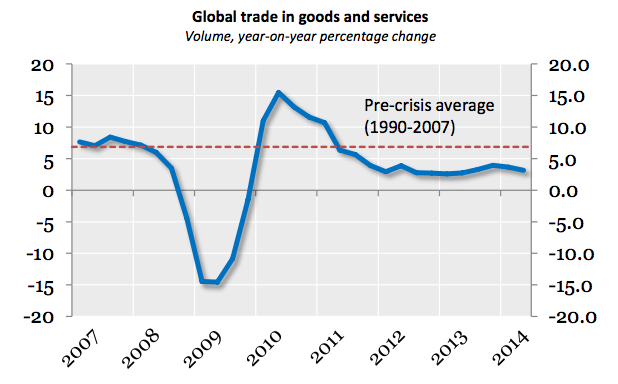 Domestic demand is likely to stagnate just as external demand, especially in the euro area as jobs creation remains anaemic and wages growth is nowhere to be seen, even at low inflation rates: 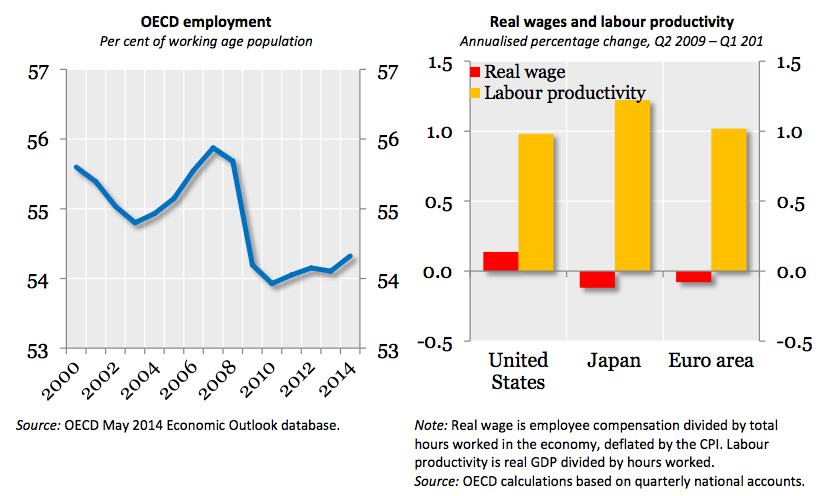 What the OECD has to say on the euro area reads like a description of a full-blow Japanization:
"The recovery in the euro area has remained disappointing, notably in the largest countries:  Germany, France and Italy. Confidence is again weakening, and the anaemic state of demand is reflected in the decline in inflation, which is near zero in the zone as a whole and negative in several countries. While the resumption in growth in some periphery economies is encouraging, a number of these countries still face significant structural and fiscal challenges, together with a legacy of high debt. "

Take a look at the above components:


In short, there is not such thing as a debt-neutral 'stimulus' when debt overhang is present across all sectors of the economy, as in euro area periphery, and in a number of other euro area states.

Boffins from the OECD have this to say on euro area's alleged malaise Numero Uno: low inflation. "Inflation has been falling steadily in the euro area for nearly three years. As demand strengthens, inflation is expected to turn back up and gradually converge on the EBC’s target range. But the succession of downward surprises has increased the risk that inflation remains far below the ECB’s target for a more extended period or declines further. Excessively low inflation makes it more difficult to achieve the relative price adjustments that remain necessary to rebalance euro area demand without having to endure a prolonged period of slow growth and high unemployment. Inflation near zero also clearly raises the risk of slipping into deflation, which could perpetuate stagnation and aggravate debt burdens."

In my view, this is just plain bollocks, pardon my language. Why?

Because low inflation only exacerbates debt burden in ratios to GDP, not in real terms and even then  only for the Governments. Low inflation means low interest rates, which reduce cost of debt servicing for all actors in the economy: households, governments and corporates. Higher inflation equals higher interest rates, which means that you are killing households and companies in order to drive that debt/GDP ratio down for the Government. Meanwhile, economy's cost of servicing the debt levels, not ratios, is rising. This is why deflation with low growth are unpleasant but bearable in debt overhang scenarios (see Japan) while stagflation (low growth and high inflation) is a disaster.

OECD rather cheerfully presents the following outlook for inflation: 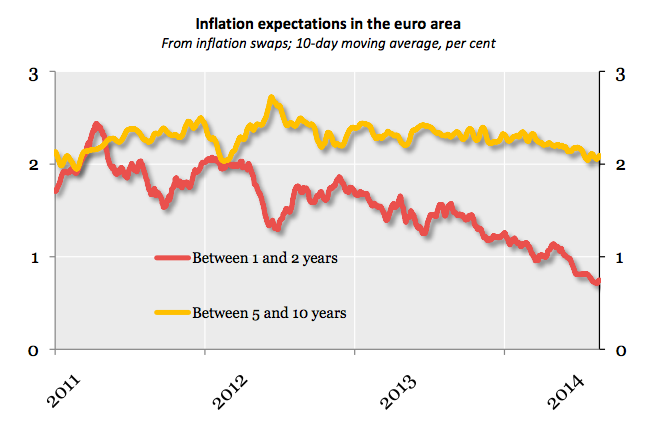 Which suggests we are heading for mean reversion (increases) in interest rates on 5-10 year horizon. Fingers crossed by then foreign investors will be snapping homes in Ireland at prices close to 2005-2006 peak so we can at least foreclose on them without much of negative equity overhang...
Posted by TrueEconomics at 10:51 AM