Recent, the WEF released its new Global Competitiveness Indicators, showing some pretty bizarre changes in Ireland's performance across a number of metrics.

Here are the historical trends and the latest figures.

Overall, 2014-2015 GCI rank for Ireland shows and improvement from 28th place in 2013-2014 rankings to 25th place in this year's assessment. Expect to see this figure paraded in the official Ireland Inc's power point slides issued by numerous state agencies and departments in months to come.

The problem is that 25th place is based on a diminished sample of 144 countries and 2013-2014 rank of 28th place is based on a larger sample of 148 economies. If the two samples are reconciled, Ireland's performance did not improve at all. As WEF points out, if the two samples contain economies present in both 2013-2014 and 2014-2015 surveys, Ireland's rank in 2013-2014 survey is 25th, dead on same as in 2014-2015. All the reforms, changes, improvements, turnarounds in competitiveness over the last twelve months amount to standing still in global indicators.

Take a look at the 'Ireland's neighbourhood' in rankings: 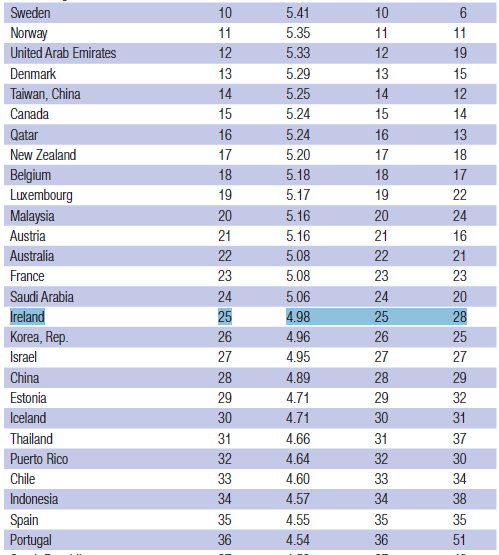 Save for Italy (49th rank), Portugal (36th rank) and Spain (35th rank) we are at the bottom of the euro area advanced economies rankings. And we face stiff competition from the likes of the usual suspects and unusual ones, like UAE, Taiwan, Qatar, Malaysia, Saudi Arabia - ahead of us, and China, Thailand, Puerto Rico, Indonesia - within 10 place of us. You might think 10 places is a safe distance, but UAE moved massive 7 places up in rankings within just 1 year. even France, hardly a poster-child for competitiveness (a mistaken, but commonly-held view) is ahead of Ireland.

Never mind competition, here are some of our performance pearls: 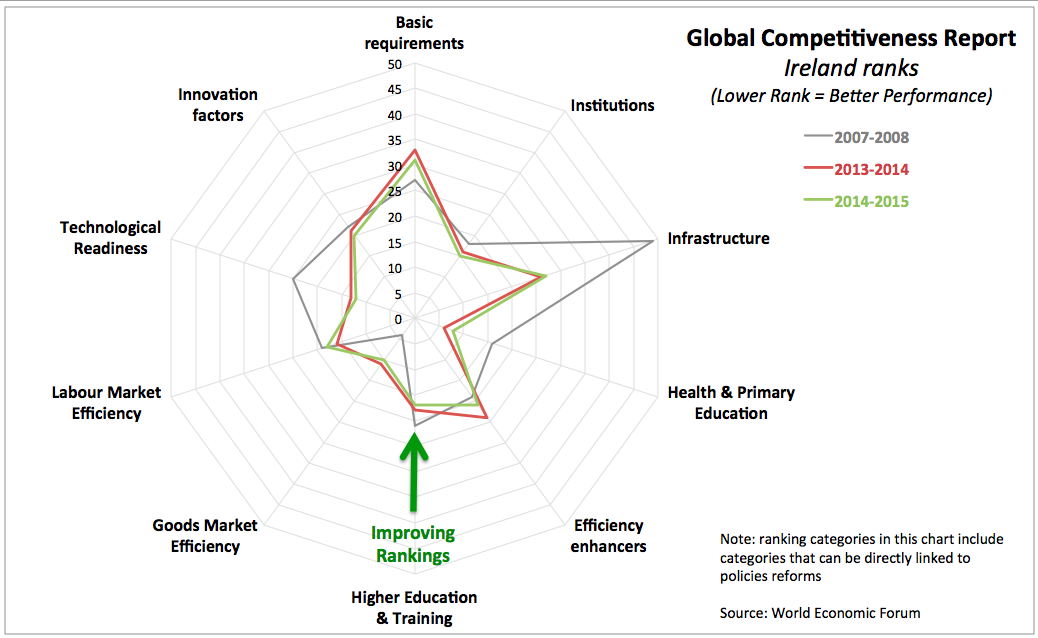 Chart above summarises changes in our rankings in 2014-2015 compared to 2007-2008 rankings in categories where we have direct control over our destiny. Take a walk through these with care and consideration.

Take for example Infrastructure. Here we have it: rank of 49th place in 2007-2008 is vastly improved to a rank of 27th place in 2014-2015. Scratch your heads: between 2007-2008 and 2014-2015 our capital investment collapsed, infrastructure investment collapsed, we built virtually no major infrastructure projects… and yet… our performance greatly improved. Applying this logic, tearing down few railway lines in 2015 might get us to rank even better in 2016.

In Health and Primary Education - the area of largest cuts, costs-reallocations and other 'austerity reforms' in recent years, our performance is getting better and better: from 16th place in 2007-2008 to 8th place in 2014-2015. How? I have no clue. Scandals at HSE are running at a steady level of historical highs, funding for new facilities and technologies and treatments is nowhere to be seen, doctors are being replaced at an increasing rate down to emigration, education system had virtually no significant improvements or new funding in ages. Still, rankings improve.

Labour Market Efficiency, however, is basically unchanged on 2007-2008. And that is despite huge efforts expended by the Government to improve our labour markets competitiveness. All the Troika reforms and all the gains in unit labour costs... to stay in the same place...

Innovation factors are also basically flat on the past. Again, despite billions in investment between 2007 and 2014 on innovation and R&D, myriad of funding programmes, agencies reforms, etc, etc. 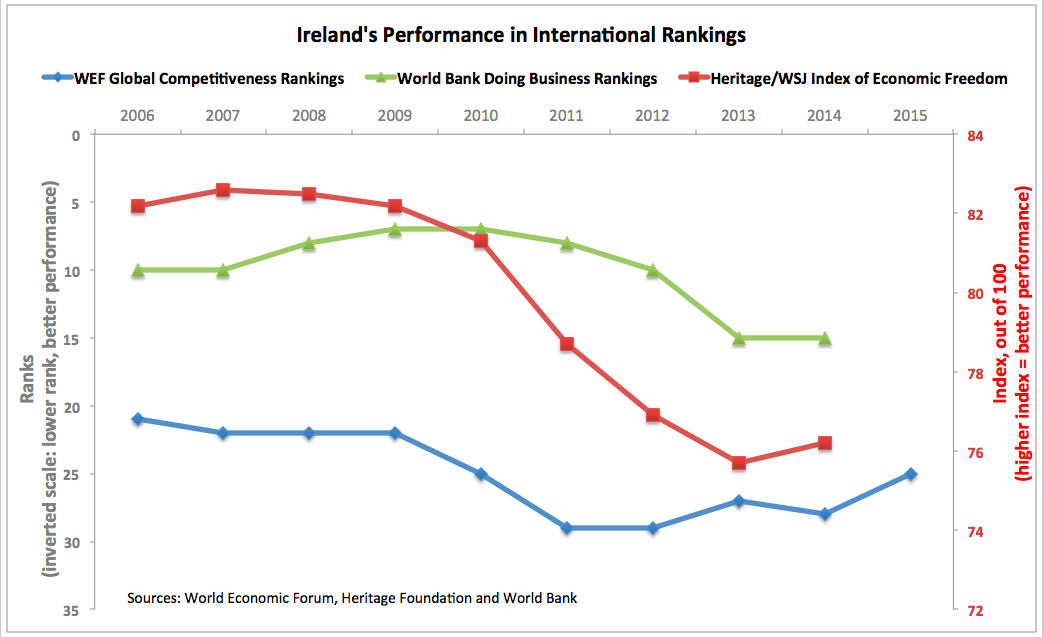 Chart above shows evolution of our overall rankings in history of the WEF report. Thing to note here is that just as with all other rankings, our performance has deteriorated from the pre-crisis period. But this deterioration is now being erased, rapidly, on foot of the above mentioned (and some other) 'improvements'.

The trend will continue on into the future: bogus data/analysis will be reinforced by more real gains, such as moderation in our obscene ranking (130th in the world) in terms of Macroeconomic Stability which is bizarrely lagging improvements in our Financial Markets Sophistication.

The latter point above is yet another 'scratch thy head' moment for WEF rankings. Macro stability ranking worst performance was 134th in 2013-2014 and this improved just 4 places to 130th in 2014-2015. In contrast worst Financial Markets performance ranking was 115th in 2011-2012 and this has improved by a massive 54 points to 61st place in 2014-2015 rankings. Now, give it a thought:
1) Irish financial system performance was effectively underwritten by the state debt and ECB.
2) Irish Exchequer performance improved significantly since 2011, but banking system remains clogged with bad debts and legacy issues. The Exchequer is beating the targets, the banks are still contracting credit and face flat/declining deposits.
3) Economy (macro side) returned to growth some time ago and with some hiccups it is performing vastly better than the banking system.
How on earth can (1) - (3) above add up to a more dramatic gain in Financial Markets assessment against Macroeconomic assessment?

All of the above puts some serious questions up against the WEF rankings. Not just for Ireland, but for the rest of the world too... Then again, it was in January 2007 in a publication accompanying WEF research that Oliver Wyman claimed that the Anglo was the best-performing bank in the world over the previous 5 years. We know the accuracy of that insight.

Posted by TrueEconomics at 1:43 PM