BOFIT published their revised forecasts for Chinese economic growth 2014-2016 and the numbers are just not pretty... not quite ugly, but not pretty. 2014-2015 forecast is for 7% growth - which is a 'psychological' bond for growth in China as it entails a 10-year doubling horizon and is alleged to be supportive of demographic changes. 2016 growth forecast is for 6% - or sub-7% magic number. 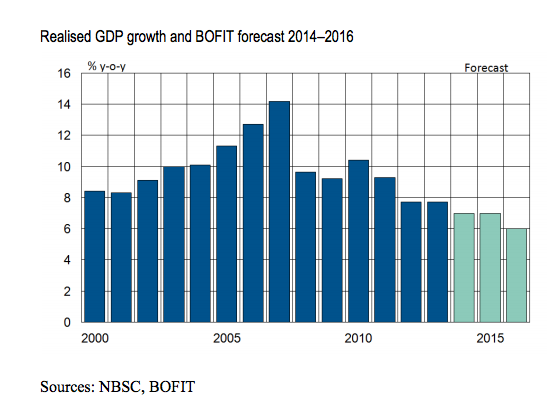 Interestingly, BOFIT note: "If the indicative data showing a relatively good employment picture are credible, even growth lower than forecast here may be suffi-cient to satisfy the needs of the Chinese society. China’s traditional official growth targets, crystallised in a single number, have outlived their purpose. They fail to guide market ex-pectations and policies in a way that reflect economic fundamentals."

The drivers of Chinese economy slowdown appear to be very similar to those impacting Russian economy: exhaustion of the investment boom. "The current slowdown in growth is quite natural given the size of China’s economy, its resource demands and increased level of development, but there are also other factors con-tributing to the slowdown. In the wake of a decade-long investment boom, new investment no longer delivers the same “bang for the buck” it did earlier. A corollary to China’s aging population is the decline in the number of work-age people. Vast environmental degradation comes with hefty costs that are already eroding growth. Finally, short-term growth will be subdued by high indebtedness that limits the government’s room to manoeuvre in the fiscal and monetary policy spheres."

The Big Hope has always been that falling investment will be offset by rising consumption. Which is what provides upside support to BOFIT forecasts. But one must ask a simple question: if debt is already a problem, who will be paying for this increasing consumption?

In case you wondered, that 'soft landing' meme is still around, but it is now being increasingly questioned: "A controlled “soft landing” for economic growth is by no means a given at this point. Remaining on the appropriate glide path will require strong economic and reform policies. The rising indebtedness of firms and local governments remains a top challenge for China’s multi-tiered economic policy matrix. Worryingly, the credit boom in China this decade tracks several earlier credit booms in other countries that ended in crisis. Darkening the mood further is an impending correction in the real estate sector. While Chinese financial markets have been relatively calm in recent months compared to a year ago, the shadow-banking sector continues to grace the headlines with stories of defaults and other problems. "

Key point is that China is not expected to support significant upside to global growth through 2016. And this leaves global growth dependent on G7...

Posted by TrueEconomics at 3:07 PM