Priceless is the best way to describe financial instrumentation antics of Irish Government.

The IMF loan early 'repayment' is really a re-financing. It has its good sides and no one argues it shouldn't be done (see here: http://trueeconomics.blogspot.ie/2014/09/992014-imf-loans-deal-can-be-win-win.html) but 'repayment' this is not.

Still more of the bizarre machinations were publicised today in an Irish Times piece: http://www.irishtimes.com/business/economy/move-on-anglo-debt-set-to-boost-exchequer-earnings-1.1942119#.VCUUnz_O6bw.twitter. The idea is that those Anglo/INBS/IBRC 'shut down' bonds that are being held in the Central Bank (with interest on them payable to the CB and thus recycled back to the State, implying zero cost financing of the bonds) can be sold at a rate faster than that required by the original schedule. Which, of course, means two things:


There is an added caveat to all of this. If the Government spends the capital gains on anything other than reduction of debt, interest costs under above pricing become net costs. In effect, we will be funding a quick-fix-drug addiction with a credit card.

Back in 2013, after the Promo Notes deal, myself and others have cautioned as to the risks associated with accelerated sales of bonds. And now this risk is upon us. And beyond all of this looms the largest question of them all: These bonds were issued to cover Irish Government liability to the ECB (Eurosystem) arising from the nationalisation of Anglo and INBS (not nationalisation, per se, but from our state assuming all liabilities of the two failed banks and refusing to burn their bondholders). So, as we all know, Ireland 'took one on the chin' for Europe.

A symmetric response from the ECB would have been to allow us hold these bonds in perpetuity, so no repayments need to be made at all. Instead, we created these bonds with an intent of selling every year a bit of this debt into the markets to generate cash to close the liability to the ECB (in other words, to raise money to burn money to appease ECB balancesheet exercise). This 'burning' of money means two things:
With the new move, we are going to accelerate (1) and (2) above and the Irish Times is cheerleading this?!

The Irish Times misses all of the above points in its article. But one man doesn't: Diarmuid O'Flynn: 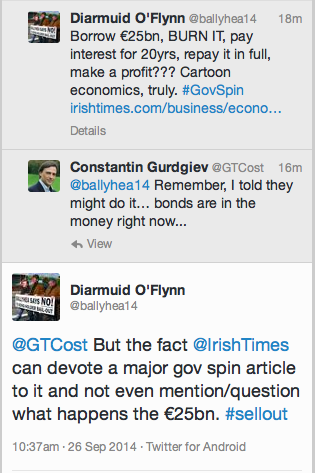 As he said, this is 'cartoon economics'...
Posted by TrueEconomics at 10:50 AM