Much has already been highlighted in the latest mortgages arrears data from Ireland for Q2 2014. The Central Bank's full press release is available here: http://www.centralbank.ie/press-area/press-releases/Pages/ResidentialMortgageArrearsandRepossessionsQ22014.aspx

But some things are worth repeating, and a couple of things remain largely unreported. Let's focus on these.

First and foremost, all figures reported talk predominantly about PDH (principal residences) mortgages as distinct from BTL (Buy-to-Let) mortgages. This is fine, but in my view, many of these are inter-connected: same families hold both, securities are inter-linked etc. So I will cover here combined numbers of PDH and BTL loans.

1) At the aggregate level, there were 165,674 mortgages in arrears of any duration at the end of Q2 2014, down 3.44% (-5,904 accounts) on previous quarter. This is the good news. Slightly less impressive news is that the balance of these mortgages in arrears stood at EUR33.629 billion, which represents a decline of only 1.93% q/q (down EUR662.2 million). So the mortgages that remain in arrears are now of larger size on average than before. This, of course, may mean that by sheer accident, easier to repair smaller mortgages are being restructured, but it might also mean that the banks are cherry picking easier mortgages. Which is fine, in the early stages of the workout, but will also mean that things are going to get progressively tougher to resolve in the future. 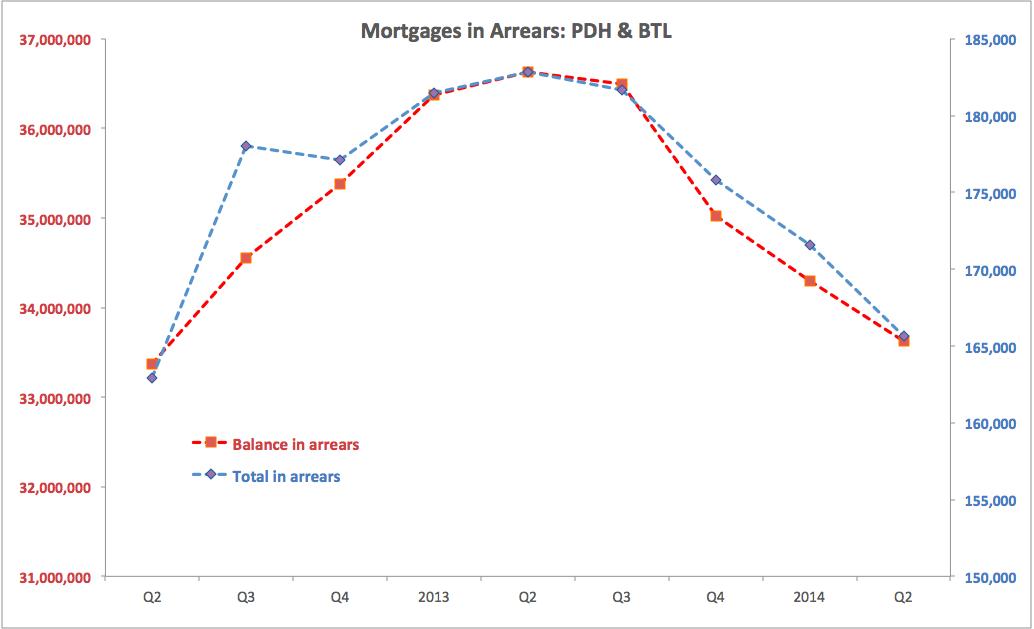 2) Robust declines in arrears were recorded in mortgages at the lower duration of arrears: 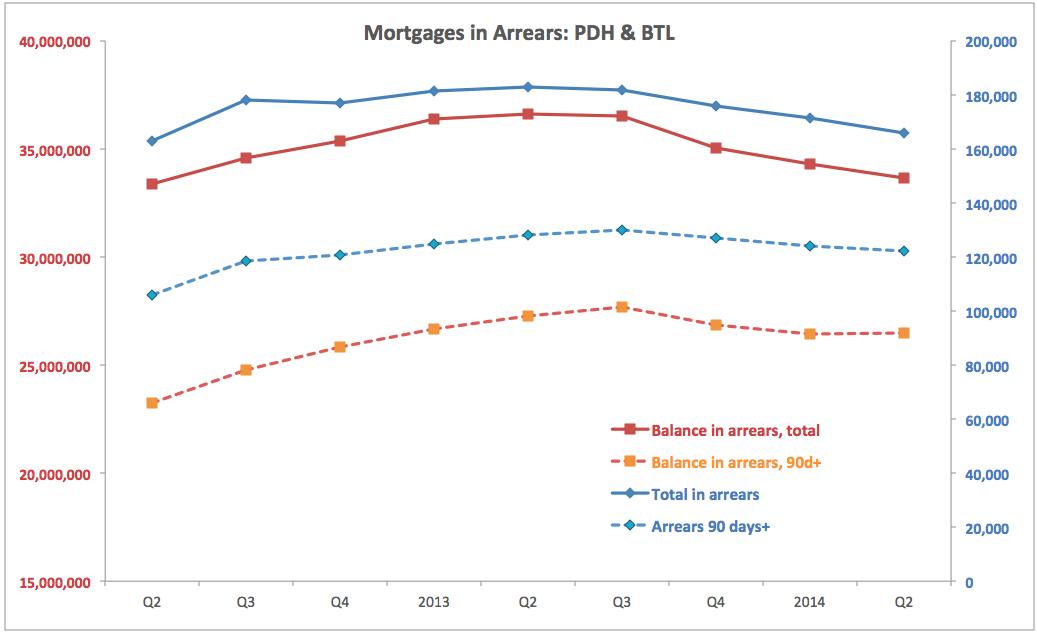 3) Things are a bit tighter with harder to resolve cases of longer duration arrears:

4) Meanwhile, repossessions rose 11.87% q/q to 1,885 which is an increase of 200 accounts - still a far cry from what should be happening in the market and yet another data point supporting the thesis that the banks are still engaged in deploying extend-and-pretend solutions in a hope of delaying repossession to allow the price to rise. This, of course, also indicates that the banks are still unwilling to face the music and deal with the most distressed borrowers by resolving residual arrears and shortfalls prior to forced or voluntary sales. 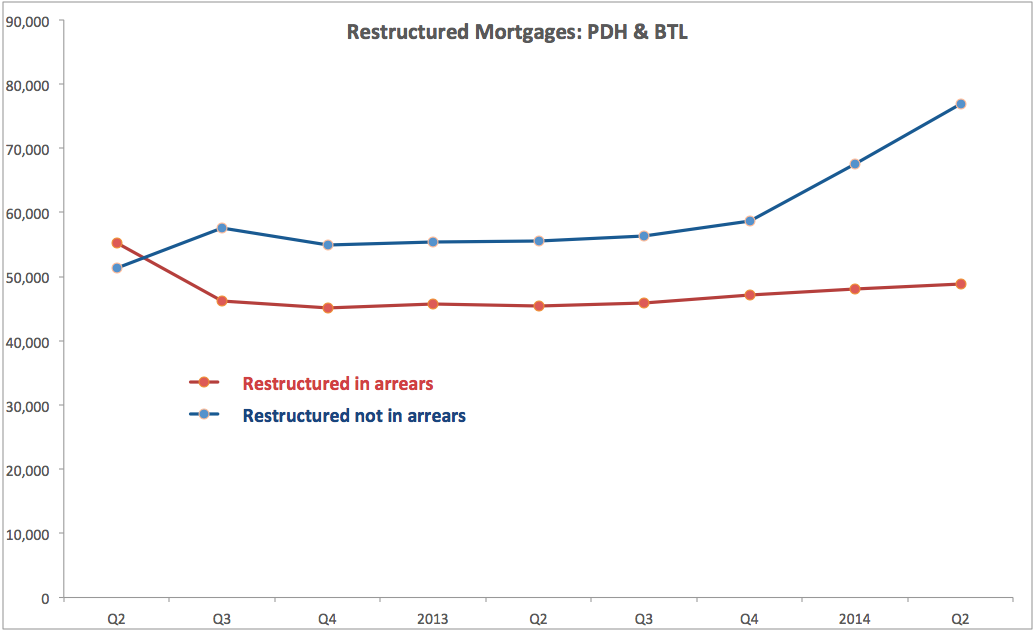 6) As you recall, I define my own category of mortgages: those that are at risk of default or defaulting, or in simple terms, "mortgages at risk". This category includes, for obvious reasons, mortgages that are in repossession, mortgages in arrears, but also mortgages that were restructured, but are not in arrears to-date (the reason for this category inclusion is that currently 39% of all mortgages that were restructured are in arrears, despite the fact that restructuring are still relatively fresh and more accurately reflect the underlying financial conditions of the households, on average over the last 2 years, 45% of all mortgages that were restructured continued to run or slipped again into the arrears). So the 'at risk' category is where potential future risks are likely to arise. In Q2 2014 264,460 mortgages accounts in Ireland (27% of total number of accounts) were 'at risk' - an increase of 1.54% q/q or 3,714 accounts. These accounts amounted to EUR46.06 billion of debt or 34% of the total mortgages debt outstanding. The value of debt in this groups of mortgages rose 0.78% q/q or by EUR357.8 million. 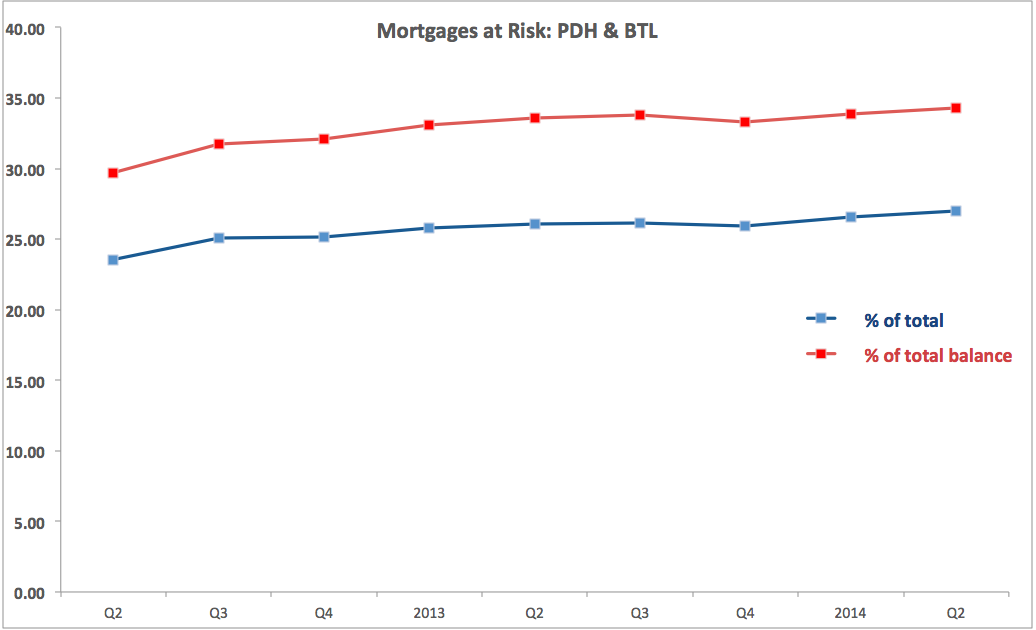 This is the underlying problem we will have to continue facing over time.

Posted by TrueEconomics at 5:51 PM