Ireland has one of the highest and healthiest birth rates in the advanced economies club, a fact that remains valid even today, amidst the economic downturn. In the past, this has prompted some economists and commentators to label this trend 'the demographic dividend'. I always pointed to the fact that if this indeed is a 'dividend', then retaining it within the Irish economy (society) is as important as generating it in the first place. Alas, over the recent years, our demographic dividend has been largely squandered away by the combination of a cyclical downturn (temporary loss of jobs) and more importantly by the structural recession (longer term loss of jobs). I highlighted the top line trends in our migration in the previous posts (here and here).

Here, let's take a quick look at the 'demographic dividend'.

With many caveats, let us define two groups of population: those in active working age group (20-64 years old) and those outside this group (0-19 years old and over 65 years old). The reason for these definitions is that younger people  under 20 years of age are significantly engaged in education systems and although some of the students do work, they are not engaged in career-enhancing work and/or work part time. Similarly, some of the people in age category over 65 are still very much gainfully employed, but vast majority of people in this age category either work part time, or do not work at all. Again, all of this relates to formal employment, so we omit household work, which is important in the economy as well, but is hard to quantify. 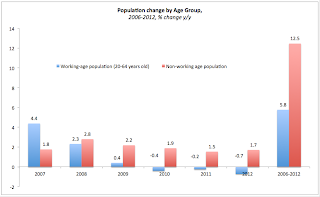 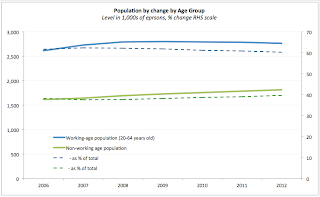 The above, of course, leaves out the account of unemployment. But even abstracting away from this, Ireland is now at risk of suffering from rising twin dependency: fewer working-age people funding more non-working-age people. All because of emigration. Dividend...
Posted by TrueEconomics at 1:07 PM

Well Constantin, even though you are right 90% of the time, you should look at the positives for a change. 50 million Irish people spread all over the world who come home on a regular basis, we have total freedom of expression without risking jail, we are at peace with the world, the same couldn't be said of many other places in the world would you agree?

One of the highest minimum wages in the world, clean air and food, nuclear free, non sysmic, 99% of the population is housed and well fed, great availability of cheap flights for all the rest, what more does one really need?

May ask those who are leaving?