Today's release of the NCB Manufacturing PMI data for Ireland for August 2012 came in with both a positive and a negative surprises. The positive side of the news is that the headline index did not dip below 50 (contraction territory) but stayed at 50.9 in August, down on 53.9 in July, but above 49.7 in August 2011. In other words, the rate of Manufacturing sector growth has slowed down markedly, but remained positive in August. 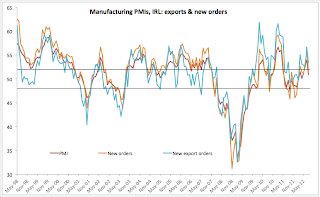 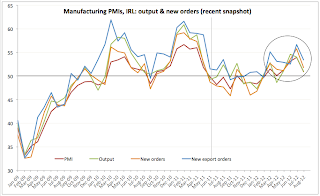 Chart below shows time series for other sub-indices. 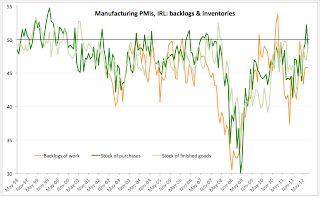 Quick synopsis of changes in prices and employment. As usual, I will be doing more detailed analysis of profitability and employment after we have Services PMI data as well, so stay tuned: 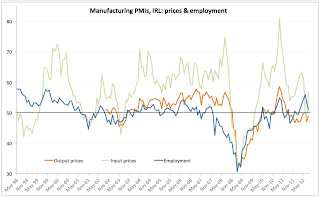 So overall, the data coming out in August is a mixed bag. Comparative to the euro area peers, manufacturing in Ireland is doing as well as can be hoped for. Alas, the rates of economic growth we require to sustain our debt deleveraging are hardly benchmarkable against our peers. And on that side, things are not encouraging.

Let's wait for Services data next...
Posted by TrueEconomics at 10:48 PM