ECB President Mario Draghi attempted to do the tight rope walking and keep markets guessing as to what ECB will do in the end in sovereign debt markets while not deflating the expectations bubble he created with his earlier pronouncements.  That he seemingly delivered on. The core potentialities of his announcements (I stress - potentialities, as in none of these are set in stone and all are subject to huge set of uncertainties) were outlined by me here. These remain functional.

In terms of today's announcement, the overall sentiment is that of a small net negative, driven by the three major negatives: conditionality (linked to the OMT), the three remaining uncertainties (design, deployment and delivery - to be explained below), and sterilization; only partially off-set by positives: unlimited programme (in theory), pari passu purchasing (risk-sharing), maturity focus and collateral easing.

Now on to details:

Positives from the OMT announcement:

Negatives from the OMT announcement:

Update: And here's a map of Draghi's comments on OMT announcement (via Prof Brian M Lucey): 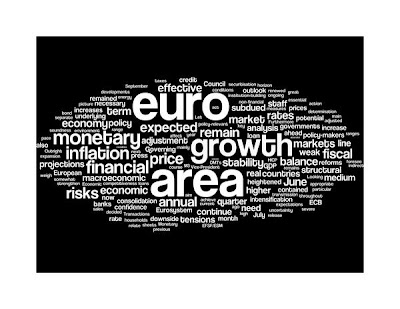 Lets take a note: word 'growth; is the most prominent operative term used and yet, nothing within OMT is about growth. In fact, the policy rate remains unchanged, hence no pro-growth move in policy dimension. The logic of growth-OMT link is a tenuous one at best, and contradictory to the OMT operational objectives. Here's why. OMT - if successful - is supposed to ease the cost of Government's transition to fiscal austerity. It is to be sterilized. Hence, OMT is neither a fiscal nor a monetary tool for sustaining or generating any growth. Other key words to note relate to 'financial' and 'risks' - I commented above on the perverse effect on financial system the OMT is likely have. I have also commented above on the bizarre discounting of risks remaining within the system once OMT is up and running.

Note: I will be working on this post throughout the evening, so stay tuned for additional comments
Posted by TrueEconomics at 5:19 PM