Latest data from the CSO on Migration and Population changes estimates for the 12 months period April 2011-April 2012 shows that during the period of so-called 'economic turnaround' marked by the officially 'EU-average growth' attained in Ireland, Irish emigration has hit new post-1990 record levels.


Charts to illustrate these trends: 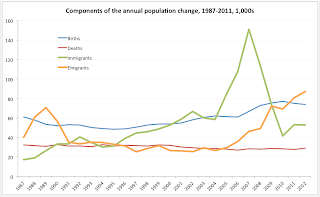 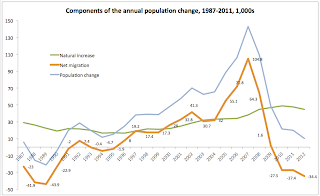 Breakdown of net emigration by nationalities shows that the principal driver of emigration from Ireland is outflow of Irish nationals from the country, confirming the trend established in 2011. 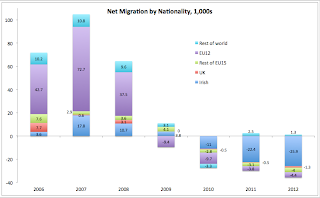 Referencing the trends in migration that existed prior to the crisis, the current crisis period is associated with potential net loss of 219,300 persons in the period of 2008-2012. In gross numbers terms, 358,100 people actually emigrated from Ireland in 2008-2012. 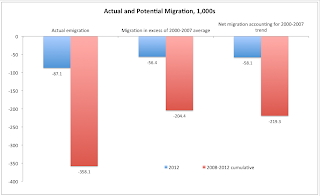 If there is such a thing as 'demographic dividend' Ireland today is running at a massive demographic 'loss'.
Posted by TrueEconomics at 6:59 AM