In the real world, confronted with the unpleasant truth, we usually react with a denial of the facts and a desperate search for someone else, other than ourselves, to blame for the misfortune. Today's QNA data release triggered exactly this basic psychological reaction. With no reason for it, other than 'let's get Johnny the Foreigner out to blame', some of the favorite economists of our Minister for Finance decided that 'Irish economic growth is suffering from the slowdown impacting our main trading partners'.

Now, that is either an uninformed error of judgement, or an outright lie, folks. In reality, exactly the opposite is happening - our external trade is still booming, while our internal, home-made depression is still raging.

I wrote about the domestic activity collapse already earlier (here's the link). Now, let's take a look at the activity arising from the allegedly falling demand from our trade partners.


But maybe the 'Johnny the Foreigner' baddy is pushing down Ireland's growth in real terms? Ok, in constant terms:
As the result of these gains and also as a function of our own (not US, UK, EA, etc) demand collapse (marked by the decline in imports), our trade balance (the net positive contributor to our GDP and GNP) has actually expanded.

Irish trade surplus has grown by a massive 18.98% in Q2 2012 in current prices terms and by impressive 14.47% in constant prices terms. Things are actually so good when it comes to 'Johnny the Foreigner Demanding Irish Exports' that our services sector posted an absolute historical record surplus in Q2 2012 of €1,387mln - for only the third time in the series history since Q1 2006. Our total trade balance surplus reached €11.391bn in Q2 2012 - by far the largest surplus reading in any quarter since Q1 2006. This is 14.1% higher than the previous quarterly record attained in Q3 2011. 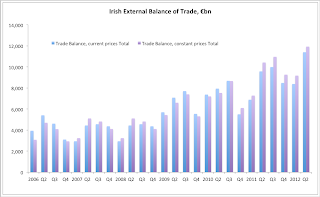 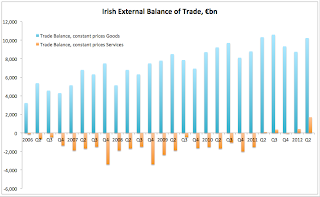 The problem, of course, that our Green Jersey folks are not too keen on acknowledging is that overall, Johnny The Foreigner thirst for Irish goods and services has preciously little connection to our GDP activity. But that, illustrated below, is a different story. 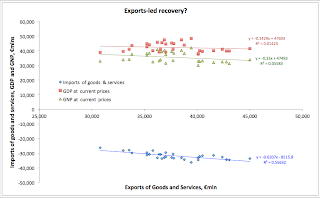 Posted by TrueEconomics at 8:20 PM