At first I resisted (rather successfully) for a number of days from blogging about the trade in goods stats for June released on August 16th. Aside from the already rather apparent pharma patent cliff and resulting collapse of exports to the US, there is little to be blogged about here. Well, may be on some BRICs data, but that will come later, when I am to update bilateral trade with Russia stats.

Then, playing with the numbers I ended up with the following two charts showing trade stats for H1 2012: 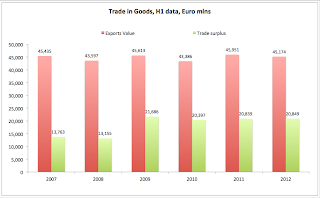 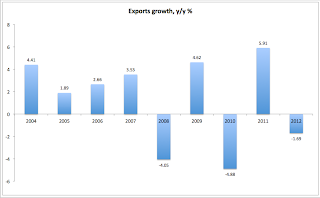 Which means that our exports-led recovery is currently running as follows: imports are down substantially more than exports (which is accounted for primarily by the collapse in domestic demand and investment activities), while exports are running only slightly behind their pre-crisis levels.

But that alone is not what keeping me focused on the numbers. Instead, it is the hilarity of our captains' expectations when it comes to the proposition that 'exports will rescue us'. Many years ago, in the days when the crisis was just only starting to roar its head, I said clearly and loudly: exports are hugely important, but they alone will not be sufficient to lift us out of this mess. Back then, I had Brugel Institute folks arguing with me that current account surpluses will ensure that ireland's debt levels are sustainable. Not sure if they changed their tune, but here's what the Government analysis was based on, put against the reality.

In the chart below, I took 3 sets of Government own forecasts for growth in exports for 2009-2012, extracted from Budget 2010, 2011 and 2012. I then combined these assumptions into 3 scenarios: Max refers to maximum forecast for specific year projected by the Department of Finance, Min references the lowest forecast number, and the Average references the unweighted average of all forecasts available for each specific year. I applied these to exports statistics as reported for 2009 and plotteed alongside actual outrun: 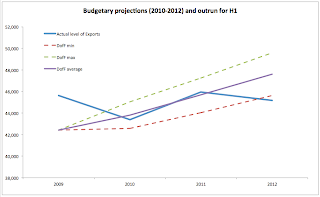 Current H1 2012 outrun for exports is €449 million lower than the worst case scenarios built into the Budgets 2010-2012 by the Governments. It is also €4,399 million behind the highest forecasts.

Put differently, the outcome for H1 2012 is worse than the darkest prediction delivered by the Department for Finance.

Of course, the exercise only refers to goods exports and must be caveated by the fact that our services exports might take up the slack. So no panic, yet. And a further caveat should be added to reflect the fact that the above is not our exporters fault, as we are clearly suffering from the tightness in global trade. On the minus side, there's a caveat that the pharma patent cliff has been visible for years and that the Government has claimed that they are capable of addressing this.

Sleepless nights should not be caused by the latest stats, yet. But if things remain of this path, they will come.
Posted by TrueEconomics at 1:01 PM

Great stuff. I did a quick, rough, check. Extrapolating annual services export figures, and assuming pharma exports will be down by only 5bn for 2012 (based on H1 results), services exports may indeed take up the slack. But then services exports must continue to rise at the same strong rate as last year. Given the fact that last year, 55% of the growth in services was accounted for by a single sector, computer services (growing at a rate of over 14%), we may want to keep an eye on developments in this sector as well.

Agree 100%. I am sure the IDA 'are aware of the issue' and will be addressing it as effectively as they did the pharma cliff... :-)