In the latest IMF Article IV Consultation paper on Ireland, the fund made some interesting observations on the ongoing Irish property bust. Here are some of these:

Firstly a chart showing where we are at in terms of current declines in property prices relative to other crises and in duration: 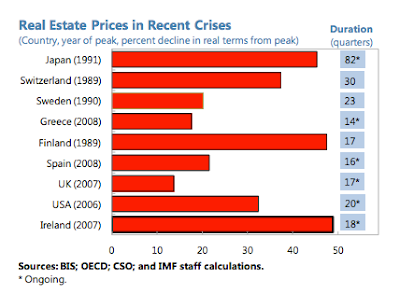 Next, there's a very revealing statement on the banks recapitalizations process (PCAR 2011) in relation to mortgages arrears (the statement that predates Professor Honohan's expression of doubt that PCARs were robust enough to all dealing with the mortgages arrears):


"Residential mortgage arrears continue to rise, but remain within the assumptions for bank recapitalization. As of end March 2012, almost 14 percent of the total principal balance of owner occupied residential mortgages outstanding was affected by arrears of 90 days or more, broadly doubling since end 2010. [Note: IMF seemingly had no desire to update their analysis for more up-to-date H1 2012 data released by CBofI and CSO (see here and here) before they published the Article IV paper].

Nonetheless, the overall arrears balance, together with developments in house prices and
unemployment, remain within the adverse scenario of the Prudential Capital Assessment Review (PCAR) that guided bank recapitalization in 2011.

[Italics are mine. The reason why I find this important is that the banks were not recaped to the adverse scenario requirements, but to the baseline scenario requirements plus cushion. The difference is significant: Overall, Blackrock estimated that BlackRock lifetime loan losses post-deleveraging would amount to €27,522 million in baseline case rising to €40,119 million in adverse case. Of these, the Central Bank assumed that only €20,014 million will take place pre-2014 in the baseline case and only €27,722 million in adverse case. That's a difference of €7 billion right there. The CBofI then made some additional assumptions and determined that €18.7 worth of capital will be needed by the banks overall. Clearly, given that this was less than what the banks estimated themselves to be the case (banks own forecast provisions totalled €17.04-22.23bn for baseline to adverse scenario cases), the CBofI 'imposed' additional 'cushion requirements' to raise overall capital requirement under PCARs to €24bn. But, wait, that is not consistent with the adverse scenario that IMF is referencing above, which is €27.7bn! So the banks were not recapitalized to the adverse scenario levels and IMF is using this term 'adverse' here to rather politely point out to the Irish authorities that the proverbial sh*t might be hitting or about to hit the fan.]

More so: "It is notable that about half of total arrears arise from loans that have already been
restructured, although part of these arrears could have arisen prior to each loan restructuring, so the effectiveness of rescheduling of distressed loans is unclear." [Now, we know this much ourselves - in H1 2012, more than 52.65% of already restructured mortgages were in arrears (see here)].

"Repossessions and voluntary surrenders of property are also very low, cumulating to 0.2 percent of the stock of mortgages on owner-occupied dwellings in the 11 quarters to March 2012. This is consistent with the one-year moratorium on repossessions of primary residences  under the Code of Conduct on Mortgage Arrears, but may also reflect a need to buttress the repossession framework." 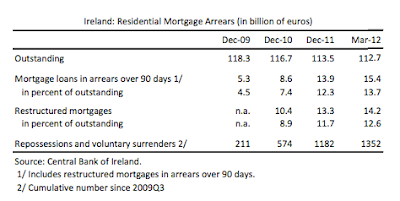 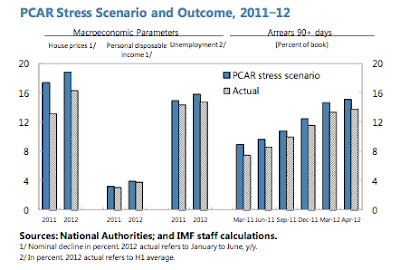 Two things to note here: table above includes voluntary surrenders of properties, something that CBofI does not ordinarily publish in their mortgages arrears data, and the chart below shows just how thin the margins are on PCAR 'stress scenario'.

So things, according to the IMF, are for now within the parameters of the adverse scenario and, per chart above, within the stress scenario. Which seems to be just about ok, when it comes to PCAR injections to-date. But crucially, there is stress building up here. Only 1 year into the programme of recapitalizations, the banks are close to hitting the wall again.

Posted by TrueEconomics at 3:49 PM

Yep, the dogs on the street know that the banks will cry for more money soon, but we are slowly coming to some type of balance in the system:

At the end of the day, it all evens out, for those with no debts, they will in 2014/15 get rewarded in the form of extremely cheap property at 80/90% drop from peak.
Capitalism is always fair in my view.

I think you're a bit wide of the mark there. As I understand it, the banks were recapitalised to withstand provisions of €27.7bn out to 2013. In addition to provisions over those 3 years, it also took account deleveraging haircuts, operating profit, capital at the outset, provision stock etc.

Therefore, I interpret the IMF comments to mean that 18 months in, the banks are on a trajectory which is inside the adverse case to which they were capitalised - this would imply CT1 at end 2013 would be greater than 6% plus whatever the buffer provides. A question is what happens beyond this point if things continue to deteriorate, and are the banks prepared for Basel III capital rules.