In the previous post I looked at the tax revenues side of the Exchequer figures for 2011. The core conclusions emerging from that analysis was that:

Irish Exchequer tax receipts did not perform well in 2011 compared to both 2010 and the target, with most of the improvement (some 80%) accounted for by reclassification of the Health Levy as tax revenue and addition of the temporary, extra-Budget 2011 Pensions Levy.

Irish Exchequer tax revenues for 2011 cannot be interpreted as being indicative of any serious improvement. Factoring in Pensions Levy and delayed receipts (Corporation Tax receipts for December carried over into 2012), overall Exchequer revenue fell 3.1% short of the target set in Budget 2011, not 2.5% claimed by the Department of Finance.

The above shortfall amounts to 0.66% of the expected 2011 GDP and 0.81% of our expected GNP and comes after significant increases in taxation burden passed in the Budget 2011, suggesting that the economy’s capacity to generate tax revenues based on the current structure of taxation is exhausted.

Subsequent posts on the topic of Exchequer balance will focus on overall balance, capital spending dynamics and relative distribution of tax burdens. This post focuses on the expenditure side of the Exchequer balance.

In general, there are good reasons as to why discussion of the expenditure side of the Exchequer balance is a largely useless exercise, rendered such by:
-       Constant re-alignment and renaming of departments, and
-        Changes in the departmental revenues (as in the case with the Health Levy reclassification) impacting the Net Voted Expenditure on Health

Here’s a good post on the above caveats from Dr Seamus Coffey which is worth a read.

So let’s consider some of the higher level figures. 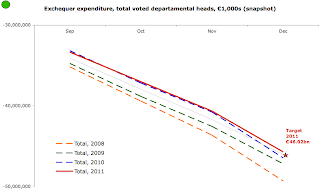 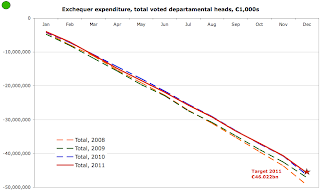 Year on year, 2011 marks the third year of declining cuts. In 2009 yoy spending fell €2.150 billion, in 2010 it declined by €0.730 billion and in 2011 the drop was €0.723 billion. In proportional terms, expenditure declined 4.56% in 2009, 1.57% in 2010 and 1.58% in 2011. Cumulated net expenditure ‘savings’ since 2008 are now standing at a miserly €3.602 billion. Given that over the same period we accumulated €81.017 billion of deficits clearly shows the inadequate extent of cost reductions in the public services. Whichever way you spin it, to cover just ½ of already accumulated deficits out of cost savings achieved so far would take decades, and that before we factor in interest payments and the fact that much of the ‘savings’ delivered to-date comes out of temporary cuts to capital spending. More on this in the forthcoming analysis of capital and current spending.

Now, since we cannot clearly de-alienate actual spending, let us at the very least consider the spending priorities. These have changed over the years and changed in the direction that, while inevitable in the current crisis, is worrisome nonetheless. 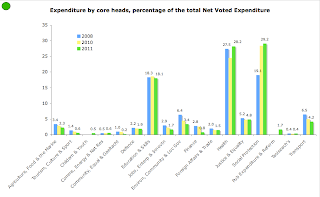 Please keep in mind that although I did try to adjust as much as possible for changes in departments compositions, the data below is not fully reflective of these. Nonetheless, it does present some interesting changes in the overall spending dynamics. 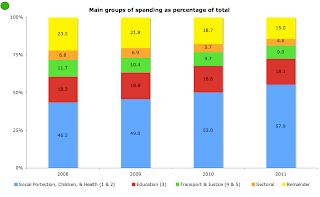 Top 4th and 5th ranked departments (Justice and Equality and Transport) saw their combined share of spending declining from 11.71% in 2008 to 9.02% in 2011. This largely reflects changes in composition of the Department of Transport.

Together, Social Protection, Health and Children accounted for 46.51% of the spending in 2008 and this now is up at 57.88% in 2011. In other words, almost €6 per every €10 spent by the state goes to finance the two functions that constitute in traditional nomenclature social welfare benefits and social benefits (note that private spending on health is netted out via departmental receipts in the net expenditure figures). Education accounts for roughly the same share – ca 18% of total spend – in 2011 as in 2008. Economic sectors departments (other than Transport) used to account for 6.84% of the total spend in 2008 and this is now down to 4.56% in 2011.

In short, the priority of the Government spending over the years of the crisis has shifted firmly away from supporting economy’s productive capacity and delivering structural subsidies to ‘social and environmental pillars’, to serving social welfare functions and preserving as much as possible public health spending. It is worth noting that the latter, of course, has been achieved by shifting more costs burden onto the shoulders of health insurance purchasers.
Posted by TrueEconomics at 7:54 AM