This is an unedited version of my Sunday Times article for January 1, 2012.


Happy New Year and the best wishes to all of you fond of reading up on economics this morning.

Having just closed the book on the fourth year of the crisis, one can only hope that 2012 will be the year of the return of the global and Irish economic fortunes.

I wish I could tell you that this will be so with some sort of certainty. That ‘exports-led growth’ will open the way for reduced unemployment and that ‘real reforms’ will take place to the benefit of those of us living here and restore the confidence of the proverbial international investors. Alas, the only reality we can glimpse from the road we travelled since 2008 is that this year will be marked by the same fiscal uncertainty, growth volatility and markets psychosis that were the hallmarks of the years past.

So in line with the New Year’s Day tradition for forecasts, lets take a look at the crystal ball and ask two questions.

Question number one: Where are we today on the road of the global economic and financial crises resolution?

At the macroeconomy level, the US has completed some two-thirds of the required private sector deleveraging. This means that by the very end of 2012 we might see some signs of life in the US consumer demand and household investment, assuming the credit system globally does not experience another seizure. Until this takes place, corporate balance sheets will remain focused on hoarding cash and capex is unlikely to re-start. The US economy is likely to bounce around the growth rates just above zero, with moderate risk of a recession in the first half of 2012.

The three black swans for the global economy are: the risk of the deficit blowout and the lack of Congressional consensus on dealing with the US debt mountain that can destabilize the Treasury market; China’s economy teetering on the brink of an asset crisis and growth slowdown; and the euro area hurtling toward a disorderly collapse. Should any one of these materialising, there will be an unprecedented shift in global investment portfolia with gold and a handful of international blue chip corporates becoming the only stores of value. Unlikely as it might seem, such a scenario will cause a new Great Depression worldwide.

Barring the catastrophe identified above, global demand will most likely remain subdued in 2012, with previous pockets of growth – e.g. the emerging markets, the beneficiaries of exceptionally low cost of carry-trade finance from QE funds in the US in 2009-2010 – becoming mired in a significant growth slowdown.

Europe is likely to be on the receiving end of the poor global growth newsflows.

France is now forecast to enter a shallow recession between Q4 2011 and Q1 2012 with annual growth falling from 1.6% in 2011 to zero percent in 2012. The downside risk for the second largest euro area economy is that fiscal adjustments planned to-date can be derailed by lower growth. In this case, France can remain in a shallow recession through 2012.

Overall, euro area growth looks set for some negative downgrades in months ahead. We can expect GDP to remain flat in 2012, having shown expansion of 1.5 percent in 2011. Personal consumption will be static, investment will shrink by 1.2 percent and Government spending will contract 0.3 percent. Exports growth will fall 10-fold, from 2011 annual rate of 6.3 percent.

This provides the backdrop to the second question of the day: What will 2012 bring to Ireland?

We are all familiar with the fact that Irish economy is highly volatile and subject to a number of push and pull factors ranging from global demand for Irish exports, to foreign conditions for debt crisis resolution in the common currency area.

Assuming no major disruptions to the current global environment, we can look at two possible scenarios.

Scenario 1 involves benign assumptions of continued growth in agricultural output, modest resilience in exports, moderating contraction in construction sector, and only slightly deeper reduction in public spending compared to 2011. Crucially, this scenario assumes virtually no nominal change in the services sector activity, a moderate rise in net taxes and a slight decrease in profits by the multinational enterprises expatriated abroad. All in, Scenario 1 yields estimated rate of growth in real GDP of 0.8% and GNP growth of 0.7%.

Less benign Scenario 2 with shallower growth in agricultural and exporting sectors activity, as well as services sectors contraction, yields growth forecast of -0.6% for real GDP and -0.9% for GNP. In this adverse scenario, Irish economy is likely to end 2012 with real GNP 13% below the peak 2007 levels.

These small differences in forecasts are, however, compounded year on year, as illustrated by the historical divergences between previous Department of Finance forecasts and realised rates of growth in the chart. 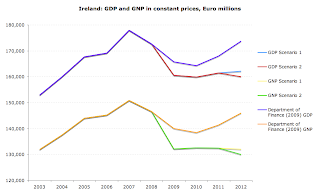 The range of risks we face is a daunting one, but there is also a narrow range of potential outcomes that present an upside for the battered economy.

In terms of the sovereign risk, recent discontent with the Budget 2012 has translated into dramatically reduced approval ratings for both Fine Gael and Labor. These are likely to persist on the back of higher taxes and a potential increases in unemployment in the retail sector and other services, post-January sales. By mid-2012, lower growth and overly optimistic projections on tax revenues and expenditure reductions will mean that the Coalition will face a stark choice of either further reducing capital expenditure, or levying some sort of a new revenue raising measure. Discontent of the backbenchers will only increase as time moves closer to the Budget 2013, possibly forcing the Government to adopt some structural reforms on the expenditure side and rethink its policy on future tax increases.

The latest projections by the Economist Intelligence Unit put peak Government debt/GDP ratio at 120-125% in 2013. At this stage, there will be a belated restructuring deal struck with EU that will see debt/GDP ratio falling to below 100%. The pressure for such a deal will be building up throughout 2012 and we might see some positive moves during the year.

Banks will be nursing continued losses, with mortgages showing a more visible trend toward deterioration, while business insolvencies will continue driving significant losses behind the façade. Again, pressure of these losses will become more apparent in late 2012, just around the time banks capital buffers begin to dwindle once again.

With economy bouncing up and down along the generally stagnant growth trend, the Government will continue its search for excuses for avoiding deep reforms. Thus, 2012 will be the year of silent risks build up in Irish economy, culminating in a major blow-out in late 2012 or early 2013. Welcome to the Groundhog Year Number Five.

Most recent data for Ireland’s external accounts shows that in Q3 2011 our balance of payments stood at a surplus of €838 million, comprising a current account surplus of €850 million and a capital account deficit of €12 million. For the nine months of 2011, the current account has registered a deficit of €669 million, an improvement of just €125 million on the deficit in the same period of 2010. Over the same time, balance of payments deficit fell from €771 million in the nine months through September 2010 to €675 million for the first nine months of 2011. Which raises the following question: given that we continue running current account and balance of payments deficits, what external surpluses does the Government foresee for the near future that can possibly make a dent in our public debt overhang? Since the onset of the current exports boom in the beginning of 2010, Ireland’s average quarterly current account surplus has been a meagre €13 million. At this rate, it will take Ireland Inc some 190 years to pay down just €10 billion of debts, even if these debts were costing us nothing to finance.

Posted by TrueEconomics at 4:45 AM

First of all Happy New Year.

I was curious as to your thoughts or predictions on for instance, consumer spending, unemployment and house prices in terms of %'s for 2012 inline with Scenario 1 & 2 outlines above?

I realise this may take a fair amount of assessment therefore would be interested to hear your approximations.

In your opinion, what should we do to turn things around and get us out of this mess.
(happy new year too, love the blog)