Several articles in the press yesterday on why Ireland will require / need a second 'bailout' - here's an excellent piece from Namawinelake and here's a piece from Colm McCarthy.

This is an unedited version of my Sunday Times (January 15, 2012) article on the same topic.


In May 2011, as Greece was sliding toward the second bailout, I conjectured that within 24 months, Ireland and Portugal will both require additional bailout packages as well. This week, my prediction has been echoed by the Chief Economist of the Citi, William Buiter.

According to Buiter, the costs of borrowing in the markets are currently prohibitive and the expiration of the €67.5 billion loans deal with the Torika, scheduled for 2014 will see Ireland once again unable to borrow to cover remaining deficits and refinancing maturing bonds. Ireland should secure additional funding as a back up, to avoid seeking it later “in a state of near panic”.

Buiter’s suggestion represents nothing more than a prudent planning-ahead exercise. In addition to Buiter’s original rationale for securing new lending, Ireland is facing significant fiscal and economic challenges that will make it nearly impossible for the State to finance its fiscal adjustment path through private borrowing in 2014-2016.

Speaking to the RTE, Buiter said that although Ireland’s situation was different from that of Greece, the economy remains under severe stress from banking sector bailouts. Addressing this stress should involve restructuring of the promissory notes issued by the state to IBRC, as the Government was hoping to do in recent months. But it also requires anchoring our longer-term fiscal adjustment path to predictable and stable sources of funding at a cost that can be carried by the weakened economy.

The Government will do well to listen to these early warnings to avoid repeating mistakes of their predecessors.

On November 18, 2011, Carlo Cottarelli, IMF Director of Fiscal Affairs Department gave a presentation in the London School of Economics, titled Challenges of Budgetary and Financial Crises in Europe. In it, Mr Cottarelli provided three important insights into the expected dynamics for debt and deficits that have material impact on Ireland.

Firstly, he showed that to achieve the ‘golden rule’ debt to GDP ratio of 60% of GDP by 2030, Ireland will be required to run extremely high primary surpluses in years to come. Only Greece and Japan will have to shoulder greater pain than us over the next 19 years to get public debt overhang down to a safety level.

Thirdly, Cottarelli presented a model estimating the relationship between the observed bond yields and the underlying macroeconomic and fiscal fundamentals that looked at 31 countries. This model can be recalibrated to see what yields on Irish debt can be consistent with market funding under IMF growth projections for Ireland. Using headline IMF forecasts from December 2011, 2014-2016 yields for Ireland are expected to range between 4.7% and 6.5%. Incorporating some downside risks to growth and other macroeconomic parameters, Irish yields can be expected to range between 5.3% and 7.0%.

Even in 5.5-6% average yields range, financing Irish bonds rollovers in the market in 2014-2016 will be prohibitively costly as at the above yields, Ireland's debt dynamics will no longer be consistent with the rates of decline in debt/GDP ratio planned for under the Troika agreement. This, in turn, means that the markets will be unlikely to provide financing in volumes, sufficient to cover debt rollovers. Thus, Ireland will either require new bridging loans from the Troika or will have to extract even greater primary surpluses out of the economy, diverting more funds to cover debt repayments and risking derailing any recovery we might see by then.

What Butier statement this week does not consider, however, are the potential downside risks to the Irish fiscal stability projections. These risks are material and can be broadly divided into external and internal.

Per external risks, the latest CMA Global Sovereign Risk Report for Q4 2011, released this week, shows Ireland as the 6th riskiest country in the world with estimated probability of sovereign default of 46.4% and credit ratings of ccc+. Despite stable performance of our bonds in Q4 2011, CMA credit ratings for Ireland have deteriorated, compared to Q3 2011. And, our 5 year mid-point CDS spreads are now at around 747 bps – more than seven times ahead of Germany. This highlights the effect of a moderate slowdown in euro zone growth on our bonds performance.

Even absent the above risks, Irish debt dynamics can be significantly improved by significantly extending preferential interest rates obtained under the Troika agreement to cover post-2014 rollovers and adjustments. Based on IMF projections from December 2011, such a move can secure savings of some €9 billion or almost 5% of our forecast 2016 GDP in years 2014-2016 alone (see chart). 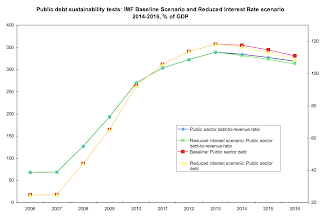 Looking into the next 5 years, there is a risk of significant increase in inflationary pressures once the growth momentum returns to the Euro area. A rise in the bund rates can also take place due to deterioration in the German fiscal position or due to Germany assuming greater role in the risk-sharing arrangements within the euro area. Lastly, German and all other bonds yields can also rise when risk-on switch takes place in post-recessionary period, drawing significant amounts of liquidity out of the global bond markets. All of these will adversely impact German bunds, but also Irish bonds.
On the domestic front, we should be providing a precautionary cover for the risk of a more protracted slowdown in the Irish economy especially if accompanied by sticky unemployment. The risk of deterioration in Irish primary balances due to structural slowdown in the rate of growth in Irish exports (potentially due to strengthening of the euro in 2013-2016 period or significant adverse effect of the patent cliff on pharma exports) is another one worth considering well before it materializes. Lastly, there is the ever-growing risk that the markets will simply refuse to fund the vast rollovers of debt which is currently being increasingly warehoused outside the normal markets in the vaults of the Central Banks and on the books of the Troika.
Overall, Ireland should form a multi-pronged strategic approach to fiscal debt adjustment. Recognizing future risks, the Government should aggressively pursue the agenda of restructuring the promissory notes issued to the IBRC with an aim of driving down notes yield down to ECB repo rate and push for ECB acceptance of burden sharing imposition on IBRC bondholders to reduce the principal amount of the promissory notes. Pursuit of longer-term objective of forcing the ECB to accept a writedown on the banks debts accumulated through the Emergency Liquidity Assistance lines at the Central Bank of Ireland is another key policy target. Lastly, Ireland needs to secure significant lines of credit with the EU at preferential rates for post-2014 period with longer-term maturity than currently envisaged under the Troika deal.
Given the general conditions across the Eurozone today, the last priority should be pursued as early as possible. In other words, there’s no better time to do the right things than now.

Box-out:
The latest EU-wide statistics for Retail sales for November 2011 released this week present an interesting reading. Retail sector turnover index, taking into account adjustments for working days, shows Irish retail activity has contracted by 0.4% in November 2011 year on year. Overall activity is now down 5.2% on same period 2008, but is up 7.9% on 2005. For all the Irish retail sector woes, here’s an interesting comparative. Euro area retail sales turnover is now down 2.5% year on year and 1.6% on 2005. In terms of overall contraction in turnover, Ireland is ranked 15th in EU27 in terms of the rate of contraction relative to November 2010 and November 2008 and 12th in terms of contraction relative to 2005. Not exactly a catastrophic decline. Once set against significant losses in retail sector employment since 2008, these numbers suggest that to a large extent jobs losses in the sector were driven by lack of efficiencies in the sector at the peak of the Celtic Tiger, as well as by declines in revenues.
Posted by TrueEconomics at 8:16 AM