Latest trade stats for Ireland are out - covering preliminary figures for November - and... it's another record trade surplus. I recently wrote about this issue for PressEurop (link here) and for Globe & Mail (link here).

But the latest data from Ireland's external trade side is truly impressive. Until that is, you dig slightly below the surface... where some strange things are starting to pop up.

Let's take it from the top. 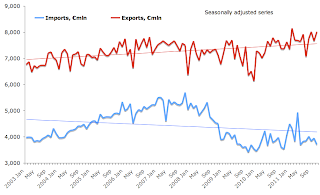 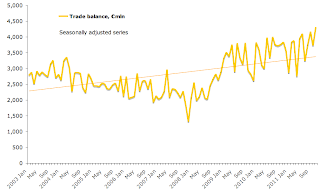 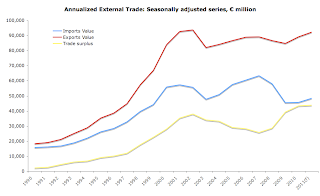 So what is going on, folks? Why are we seeing record surpluses, against fairly impressive exports and growing imports? The answer can be found in two stats. The first one, relates to terms of trade, and the second one relates to transfer pricing. let's take a look, shall, we?

CSO reports terms of trade data with 1 month lag, so we do not have November results yet, but we do have october figures. 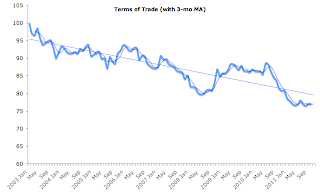 As you can see from the above chart, terms of trade improved (downward movement in series) in october for Irish exporters. And this improvement is rather dramatic both in the short-term and in the long-run. However, as the chart below shows, the improvement in terms of trade in October 2011 relative to October 2010 was not fully utilized by the exporters (we are below the long term relationship, implying that for current levels of terms of trade, our exports should be higher than they are). 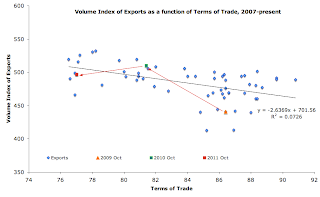 What did, however, take place is a massive jump - to a record high - in overall ratio of exports to imports in merchandise trade (chart below). In more layman's terms, all of a sudden, in November, Irish exporters needed less imported materials to supply more of exports. Hmmm... Has the chemicals component of Viagra pill change? Not really. Has the value of this component become cheaper for Irish operations of the respective MNC? No. In fact it became more expensive as the euro weakened against other currencies and terms of trade improved. So what did happen? 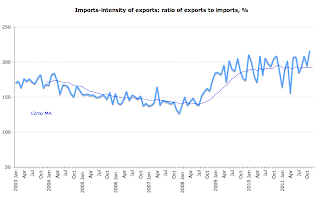 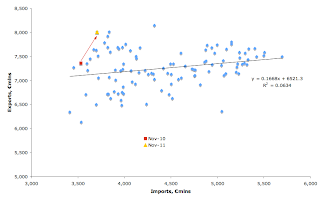 What the above suggests is that Ireland-based MNCs are:


This is not exactly the stuff the dreams of 'exports-led recovery' should be made of, but for now, let us rejoice that at least in one area we have really strong performance in this economy. Afterall, better that than nothing.

Posted by TrueEconomics at 9:33 AM