There are many 'expert' voices in the media saying Greece should exit the Euro zone in order to return to growth. This, as I commented earlier today, is a gross oversimplification of the reality.

There is simply no evidence whatsoever that Greece can grow on its own any faster or more sustainably than it did within the Euro. In fact, the evidence presented below shows that the only period during the last 30 years in which Greece was able to somewhat marginally close the gap in growth between itself and the Advanced Economies group is the period immediately following its accession to the Euro.

It is a fallacy of 'alternative expectations' to believe Greece will be enabled to grow its economy under post-euro devaluation beyond achieving a 1-2 years-long 'bounce'. Analysts who expect Greece to recover on the back of exiting the euro & devaluing are deluding themselves for two major reasons:

In summary, Greece never once had any fundamentals to grow on its own without massive subsidies either via loose monetary policy or overinflated expectations relating to the country accession to the European common structures. Greece is not about to get real growth-driving fundamentals within or outside the euro area.

In short, all those talking about 'Greece must exit euro zone to achieve growth' are nothing more than fake doctors treating a patient who himself is faking a disease. Greece's problem is not the Euro. It's problem is Greece itself.

Here are the charts proving the point. 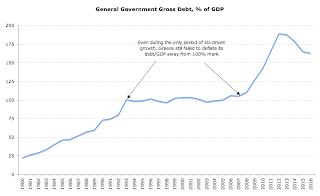 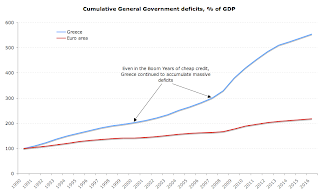 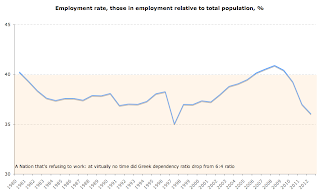 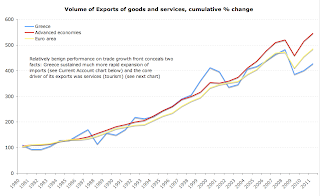 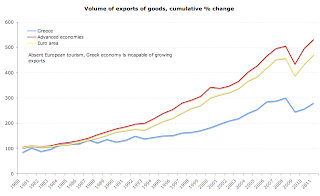 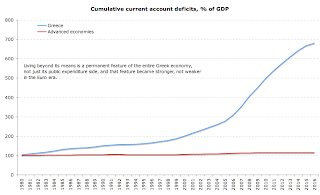 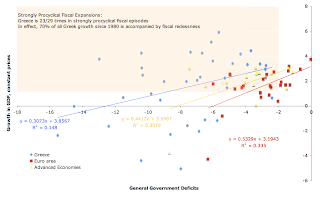 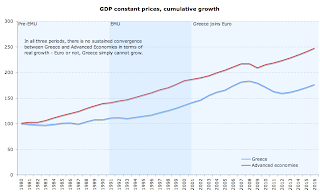 QED.
Posted by TrueEconomics at 11:44 AM

Maybe you could do a post to explain how government spending would increase growth in Greece?

As far as i was aware, government spending does not generate growth, it does the opposite.

Of course, Al. It's really that simple - the chart above (scatter plot) shows that in almost all years of economic growth, Greece run significant fiscal deficits. The Government was borrowing in the markets to finance whatever 'investment' current spending activities it had. This borrowing was officially accounted for as Government consumption and investment - aka a net additive to GDP. The fact that one day Greece will have to repay these funds, thus creating a drag on future economic activity via net factor payments outflows never really bothered the Greek Governments of the day. Hence, much of Greece's alleged 'growth' was really borrowed from the future. And now that future arrived...

so you can see government spending is indeed part of the GDP. if you increase it, then GDP will increase. simple.

Good post. I think I agree re growth. But - Is not the argument that leaving the Euro would allow Greece to reduce unemployment, by restoring "competitiveness"? And that permanent unemployment / "internal devaluation" is likely to cause riots / destruction of mainstream political parties?