Parts of Irish media love GDP per capita comparatives within the EU27. Years after the Celtic Tiger went belly up, the Irish Times and RTE and some (though not all) Left-of-Centre alternative media trumpet our allegedly stellar performance in this metric as the evidence that more should be taxed out of the 'rich' to pay for 'vital services'. Parts of international Right-of-Centre media still refer to these comparatives as the evidence of the 'Low Tax' Irish miracle at work. Both are missing the core point I have been raising over the last decade (since moving to Ireland, really): GDP is irrelevant metric for Irish economic well-being.

Take, for example, the following 'latests' data released last month by the eurostat. In 2010, Irish GDP per capita stood at 28 percent premium over EU27 average and at 18.5% premium over EA17 (euro area). This 'achievement' made us look like the third highest income economy in EU27, and the 5th highest earning population when Norway, Switzerland and Iceland are added into the equation. Our GDP per capita was ahead of Iceland (111% of the EU27 average) and was second only to Luxembourg and Netherlands. Even more significantly, although our standing compared to EU27 did drop from 133% in 2008 to 128% in 2009 and 2010, our rank did not change. We were the 3rd highest 'income' economy in per capita terms in 2008 and we were, allegedly, that in 2010.

Now, that claim alone should put a grain of doubt into the wheels of the 'spend more, tax more' machine here. Afterall, we, in Ireland, have experienced the worst recession on record in 2008-2010. And yet, the indicator is showing us doing 'Just Grrreat!'

Of course, we know that somewhere around 20% of the GDP is expatriated with little benefit to the economy by the MNCs. And shaving off these 20% off the 128% premium we allegedly possess leaves us with an approximate GNP-linked premium of 102% - just above Italy at 101%. This would rank Ireland as 12th highest income economy in EU27. But in addition, what GNP and GDP don't measure and yet all of us know, Ireland's cost of living is well ahead of the EU27 average. Which means that while nominally we might earn slightly more than the average European, in terms of what these earnings buy us we should be much further behind. The alleged 'competitiveness gains' so much lauded by the Government help, but they shouldn't make as much of a difference to consumers, since these gains are primarily adversely impacting their earnings, not the cost of things we spend our money on. Deflation in the private sectors of economy over the last 3 years has been matched by inflation in the State-controlled sectors.

So the eurostat, handily, reports another metric of real incomes and wellbeing in the state - the Actual Individual Consumption per Capita - a measure that takes into account both public and private sources of individual consumption. And here, folks, we are much less of a 'high achiever'. In 2010 Irish AIC was 102% of the EU27 average - exactly where it should be once we control GDp for GDP/GNP gap. Which makes us 13-14th highest ranked economy in EU27. Or in other words, an average performer. Worse than that, our performance here was on par with italy (102%) and just 1 percentage point ahead of Greece. Barring the PIIGS we were the worst performing economy in the group of advanced EU27 member states.

And rebasing the data to compare against the EA17 average (euro area average) shows things are pretty much dire in Ireland. Back in 2008 we had AIC of 102% of the EA17 average. that fell to 96% in 2009 and 95% in 2008. This 7 percentage points drop in ireland's relative standing is the worst of all EA17 states. For comparison, in Greece the decline was 3 percentage points. Chart below illustrates: 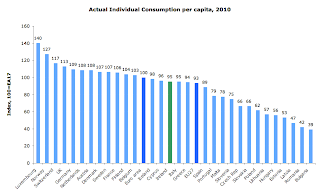 Now, there's a chart RTE and Irish Times won't show you. And not only because it requires doing some research in the form of recalibrating the data, but because it won't fit the philosophy of 'Ireland is Still Rich. Tax Ireland!' that both outfits are so keen supporting.
Posted by TrueEconomics at 5:15 AM

We are above Italy, below Belgium. Is this now where you would expect us to be? It is moderately good for a peripheral economy that is really 100 years behind Northern Europe and about 15 years ahead of Eastern Europe in terms of industrial development.

Good comment, Antoin. I am sure many people think the same and for a good reason.

I am not surprised we are where we are. It reflects more properly the fact that we are largely a transfer pricing hub, not a real economy, a tax haven for MNCs. And no, I have no problem with the latter, although I do have a problem with not being much more than the latter.

As far as comparatives go... I wouldn't be keen on living in a country between Italy and Belgium (we are not that close to the latter in actual measured consumption, and we are miles behind the former in terms of quality of life when measured by many things people do consume, e.g. food and culture).

Nor am I satisfied with living in a country that measures economic progression by references to industrial development.

I would prefer to live in a dynamic, internationally trading domestically-anchored economy with strong comparative advantages in high value added sectors of modern services and manufacturing. None of these objectives requires references to industrial development or, indeed, to the length of our lags relative to Northern Europe.

Key comparatives for me are the countries that have very similar historical structures and yet are outperforming us: Netherlands and Denmark (small, open economies with less industrial focus, more high value added focus), Finland (independent since 1918, but really independent since 1945 - much shorter period than Ireland), with no natural resources advantage, industrial revolution footprint, etc.

Even in these terms, I would use such comparatives very carefully. An Olympic athlete does not satisfy herself with being 'between K and R', neither should a young nation with aspirations and capability be satisfied with being between Cyprus and Italy, or Iceland and Greece.

The culture of low aspirations frightens me - especially in Ireland's case. We are too young and have too much of a potential to be greater than either side of our current 'AIC neighborhood'.