This is an unedited version of my Sunday Times article from January 8, 2012.

In the theoretical world of Irish banking reforms, 2012 is supposed to be the halfway marker for delivering on structural change. Almost a year into the process, banks are yet to meet close to 70% of their total deleveraging targets, SMEs are yet to see any improvements in credit supply, households are yet to be offered any supports to reduce their unsustainable debt burdens, longer-term strategic plans reflective of the banks new business models, now approved by the EU not once, but twice are yet to be operationalized, and funding models are yet to be transitioned off the ECB dependency.

In the period since publication of the banking sector reforms proposals, total banks core and non-core assets disposals are running at some €14 billion of the €70 billion to be achieved by the end of 2013. Even this lacklustre performance was heavily concentrated in the first nine months of 2011, when few of Irish banks competitors were engaging in similar assets sales.

Since then, things have changed. Plans by the euro area banking institutions, already announced in Q4, suggest that some €775 billion worth of euro area banks’ assets will come up for sale in 2012. That is more than 8.5 times the volumes of assets disposals achieved in 2011. And 2012 is just the tip of the proverbial iceberg. According to the Morgan Stanley research, 2012-2013 can see some €1.5-2.5 trillion worth of banks assets hitting the markets. With 2012 starting with clear ‘risk-off’ signals from the sovereign bond markets and banks equities valuations, the near term future for Irish banks deleveraging plans can be described as bleak at best.

Further ahead, the process of rebuilding capital buffers, in both quantity and quality, can take core euro zone banks a good part of current decade to achieve. In this context, Irish banks deleveraging targets are grossly off the mark when it comes to timing and recovery rates expectations.

Progress achieved to-date leaves at least €35-40 billion in new assets disposals to be completed in 2012 – two-and-a-half times the rate of 2011. The two Pillars of Irish banking alongside the IL&P are now facing an impossible dilemma: either the banks meet their regulatory targets by the end of 2013, which will require deeper haircuts on assets and thus higher crystallized losses, or the 2013 deleveraging deadline is bust. In other words, Irish banks have a choice to make between having to potentially go to the Government for more capital or suffer a reputational cost of delaying, if not derailing altogether, the reforms timetable.

This is already reflected in the negative outlook and lower ratings given by S&P to AIB last month. The rating agency stressed their expectation of the slowdown in assets deleveraging in 2012 as one key rationale for the latest downgrades. Post-recapitalization in July, AIB core Tier 1 regulatory capital ratios stood at a massive 22%, the fact much lauded by the Irish authorities. However, per S&P “AIB’s capital ratio… will be between 5.5% ad 6.5% by 2013” due to materially “higher risk weights [on] capital, estimated deleveraging costs, as well as further capital erosion from the core business”.

Bank of Ireland finds itself in a better position, but, unlike AIB, it has much smaller capital reserves to call upon in the case of shortfall on July 2011 recapitalization funds.

Another area of concern for Irish banking sector relates to funding. Central Bank stress tests (PCAR) carried out in March 2011 assumed that by the end of 2013 Irish banking institutions will be funded on commercial terms. This too is subject to significant uncertainty as euro area banks enter a period of rapid bonds roll-overs in 2012-2014. Overall, the sector will face ca €700 billion of bonds maturing in 2012 and total senior debt maturing in 2012-2014 amounts to close to €2.2 trillion once ECB’s latest 3-year long term refinancing facility is factored in. For comparison, in 11 months through November 2011, euro area banks have managed to raise less than €350 billion in capital instruments, and various senior bonds. Again, international environment does not provide any grounds for optimism about Irish banks ability to decouple themselves from the ECB supply of funds.

In the short run, Irish Pillar Banks dependency on central banks’ funding is a net subsidy to their bottom line, as central banks credit lines come at a fraction of the expected cost of raising funds in the marketplace. This makes it possible for the banks to sustain their extend-and-pretend approach toward retail borrowers.

However, in the longer term, reliance on this funding represents major risks of maturity mismatch and sudden liquidity stops. The latest data clearly shows that the major risk of Irish banking sector becoming fully dependent on ECB as the core source of funding is now a reality. Reductions in the emergency liquidity assistance loans extended by the Central Bank of Ireland are now matched by increases in ECB lending to these banks. A recent research paper from the New York Federal Reserve shows that Irish banks continue to account for the largest proportion of all loans extended by the ECB to the banking systems of the euro area ‘periphery’.

Lacking functional banking sector, in turn, puts a boot into Government’s plans to use reforms as the vehicle for reversing credit supply contraction that has been running uninterrupted since 2008.

Another major risk inherent in the Irish banks’ funding and capital dependencies on Central Banks and the Government is the risk that having delayed for years the necessary processes of restructuring household debts, the banks can find themselves in the dire need of calling in the negative equity loans. This can happen if the Irish banking sector were to be left lingering in its quasi-transformed shape when ECB decides to pull the plug on extraordinary liquidity supply measures it deployed. While such a prospect might be 2-3 years away, it is only a matter of time before this threat becomes a reality and the very possibility of such eventuality should breath fear into the ranks of Ireland’s politicians.

As the current reforms stand, the sector will not be able to provide significant protection against the ECB policies reversal, even if the Central Bank-planned reforms are completed on time. The reason for this is simple. Our twin Pillar banks will be facing – over 2013-2018 – a rising tide of mortgages defaults and voluntary property surrenders, as well as continued mounting corporate loans losses as the economy undergoes a lengthy and painful debt overhang correction, consistent with the historical evidence of similar balance sheet recession. 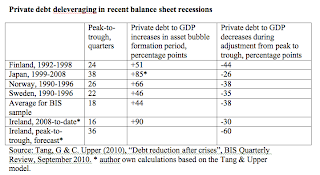 While the capital for writing these assets down might have been at least in part supplied under PCAR 2011, the banks have no means of managing any added risks that might emerge alongside the mortgages defaults, such as, for example, the risk of their cost of funding rising from the current 1 percent under the ECB mandate to, say, 6 or 7 percent that private markets might charge.

For all the plans for banking reforms proclaimed for 2012 by the Central Bank and the Government, in all likelihood, this year is going to see more mounting corporate and household loans writedowns, amidst the continuation of the extend-and-pretend policies by the banks. The longer this process of delaying losses realization continues, the less viable the remaining banks assets become. And with them, the lower will be the credit supplied into the real economy already starved of investment and funding.

Irish banking sector structure envisioned under the Government reforms plans will not be conducive to an orderly deleveraging of the real economy and simultaneous repairing of the banks balance sheets. Sectoral concentration, in part driven directly by the Government dictate, in part by the massive subsidies provided to insolvent domestic banks, will see a colluding AIB & BOFI duopoly running circles around the regulators, supervisors and politicians.

How serious is this threat of the duopoly-induced markets distortions in post-reform Irish banking? Serious enough for the latest EU Commission statement on Bank of Ireland restructuring plans to devote significant space to outlining high-level set of subsidies that the Irish authorities are planning jointly with ECB.

No one as of yet noticed the irony of these latest amendments to the Government plans for the banking sector reforms: to undo the damaging effects of state subsidies to the incumbents, the EU and the Government will offer more subsidies to the potential newcomers. Such approach to policy would be comical, were it not designed explicitly to evade the real solution to the banking sector collapse in this country – a wholesale restructuring of the sector, that would have used insolvent banks’ performing assets as the basis for endowing new banking institutions to serve this economy.

Posted by TrueEconomics at 10:03 PM