Irish Exchequer returns for 2011 are in and there has been much in the line of fireworks celebrating the 'strong' results. Alas, these celebrations are revealing more about the nature of the Exchequer figures analysis deployed by the Government spin doctors than about the real dynamics in tax revenues and spending reforms.

In this post, let's take a look at the tax performance over 2011.

Income tax receipts came in at the grand total of €13.798 billion this year, 22.4% up on 2010 and 16.6% up on 2009. Alas, the gross year on year gain of €2.522 billion achieved in 2011 is accounted for by re-labeling of the former health levy into income tax component. In 2010 the state collected €2.018 billion worth of health levies receipts which were not classified as a tax measure. This year, it was classed as such, and although we do not know just how much of the health levy has been collected, netting out 2010 receipts for this revenue head out of the 2011 tax receipts leaves us with an increase in income tax like-for-like of closer to €500 million year on year. And these net receipts would imply income tax still down on 2009 levels.

Overall, income tax was down €327 million on target set in Budget 2011 - a shortfall of 2.3% - not dramatic, but hardly confidence-instilling.

The chart below illustrates trends over time, but one has to keep in mind that 2011 figures are gross of USC (and thus Health Levy receipts). 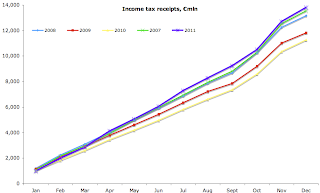 More revealing (as these compare like-for-like) are VAT receipts: 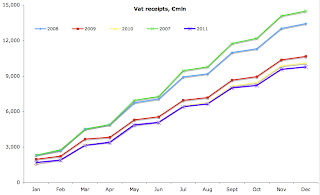 Corporation tax is shrinking. Official numbers show Corpo receipts are at €3.52 billion in 2011, down €404 million on 2010. These include €261 million in delayed receipts, so year on year Corpo receipts are down really €143 million. This might look small, but for the economy that is allegedly 'recovering' the dynamic is poor. In percentage terms, Corporation tax receipts are off 10.29% yoy and 9.74% on 2009. Compared to 2007, corporate taxes are down €2.871 billion (disregarding the late receipts). 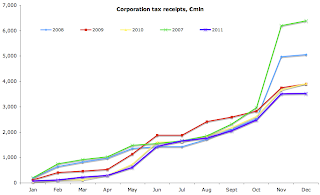 Relative to target, once December delayed payments are factored in, Corporation tax has fallen short of the projections by €239 million. In overall official terms, the tax is down €500 million on traget (-12.4%). 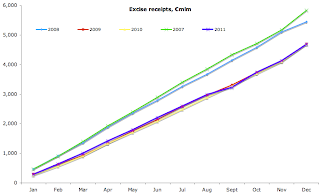 Another big tax head is the Excise. This came in exactly at the same level as 2010: €4.678 billion. Excise receipts are down just €25 million on 2009, but significantly lower - by €1.16 billion relative to 2007. Excise taxes are now basically in line with Department projections for Budget 2011. 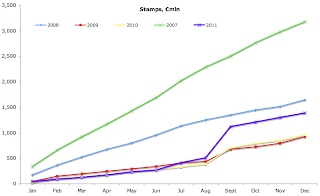 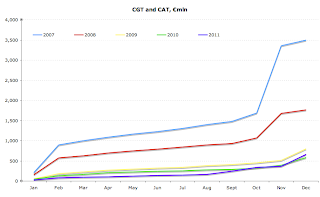 Both tax heads combined were bang-on on target.

So overall, of top 5 tax heads, 3 were behind the target despite the fact that Income tax included reclassification of tax revenues under USC, one was bang on target and one was ahead of target once temporary pensions levy is added, but behind target when this is netted out. In a summary, 4 out of 5 tax heads have underperformed the target and one came in at virtually identical levels to target. Where's, pardon me, the fabled 'improvements' and 'stabilization' in Exchequer revenues that Minister Noonan has been talking about?

Even using dodgy apples-for-oranges accounting procedures deployed by the Government, tax revenues are down 2.5% on the Budget 2011 target. How on earth can anyone claim this to be 'stabilizing' performance or an 'improvement' defies any logic.

Let's do the sums:
That means that the Exchequer revenues side performance was really surprisingly unimpressive.
Posted by TrueEconomics at 7:38 PM

While these details are wonderful, the main message is still clear.

The interest on borrowing is heading for 40% of total income tax take.

Great read once again.
But surely the overall picture is not complete unless combined with an analysis of the Social Fund which still accounts for billions of Revenue and Expenditure each year.
Can u unearth these amounts?
JStanley

@ Anonymous: I presume you mean European Social Fund, which contributes:

"The current round of EU Structural Funds will run from 2007 to 2013. Over this seven year period Ireland will receive more than €375 million in assistance from the European Social Fund. With match funding, this amount rises to almost €907 million of direct Structural Fund support to activity in the area of employment and human resources development."