Brian Lenihan confirmed yesterday that the Government is now seeking an extension of the bank guarantee scheme by 3 months to the end of 2010 to coincide with capital requirement deadline set by the FR. The extension with cover new liabilities of 3mo-5 years and will not cover subordinated debt. This was expected, given the profile of maturing banks debt and the dire conditions in the funding markets where investors have been reluctant to extend new funds to Irish banks (based on the high risk perception concerning the sector and geography) and the interbank lending markets remain in elevated yields territory. Sovereign spreads reaching 313 bps for 10 year paper over the bund are not helping either, record levels, indeed.

Added uncertainty weighted on the banks is stemming from the rumors surrounding the issue of regulatory controls that the Central Bank is expected to impose on banks loans distribution across various sectors. It is expected that the CB will push (next week?) for specific maximum exposure ceilings on lending to property sector for banks. If so, this will require serious re-thinking of Irish banks models away from the traditional reliance on property-based collateral deals going to finance more property-related investments and in favour of more business and consumer oriented banking.

The winner - of the Big 4 - here will be BofI, which has a much more customer-oriented model of consumer banking than AIB (not to mention ptsb or Anglo). But all banks will find it challenging to bring in more consumer orientation in the environment where thy are trying to push up margins on existent paying clients. And even more importantly, all banks will find it difficult to enter serious business investment markets.

Meanwhile, on wholesale funding side, things are now so desperate that the EU - never the first to push for greater transparency - is being forced to publish the results of stress tests on the region’s banks. Expected before the end of this month, the tests are likely to be a hogwash - Merkel already stated that the 'EU has taken precautionary measures' in relation to stress tests results. Whatever this might mean, one wonders.

There's an excellent post on econbrowser blog (here) on the extent of the PIIGS banks problems and the expected size and geographic distribution of potential contagion. A chart below says it all: 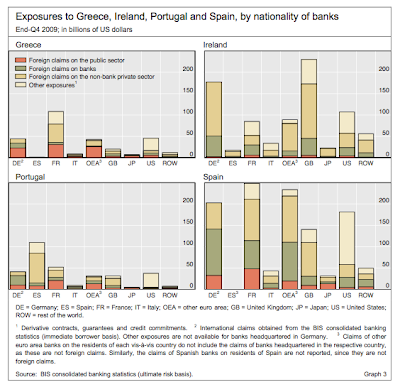 I mean, really, folks, we beat Greece and Portugal as a combination. And for UK banks, we beat all other 3 sickest puppies.
Posted by TrueEconomics at 9:36 AM