While working on a project relating to economic policies in Ireland, I was compiling data on regional variations in various series. Here is a set of interesting graphs detailing the labour force differences across the main regions.

Each data set reflects the latest available QNHS data through Q3 2009 and each is presented in two charts - full history and a snapshot of the crisis dynamics since 2007. 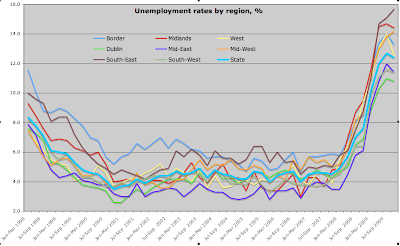 Notice that since time memorial Dublin runs at or below average in terms of unemployment rates. This pattern is no persistently broken, with Dublin unemployment performing remarkably better in this crisis. Also note that the top tier of unemployment black spots in the country also remains relatively resilient over time. This has to put to test any assertion that state policies to deal with longer term unemployment are working.

Take a look at a closer time frame, relating to the current crisis: 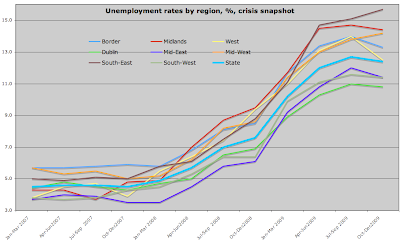 You hear a lot about the MNCs and exporting companies holding our line from a total collapse of economy. Well, say the same for Dublin, South-West and Mid-East. Of course, the latter is largely, hmmm, Greater Dublin, really.

The chart above also hints at something more disturbing here. Recall that early rounds of layoffs impacted predominantly construction sector and associated services. Well, look at Midlands and South-East. It does appear that the two regions were experiencing significantly faster rates of jobs losses in the early parts of the crisis than any other region.

One wonders what is the exact distribution of jobs in the country relative to places of residence. This, of course, is a long running question that CSO is refusing to ask on QNHS. What trouble can there be, folks, in asking a recipient to state where they physically work. It would tell us a lot about people's commuting patterns (helping to better plan transport systems) and about where people are actually employed (helping us to better plan associated business services provisions). But no - CSO staunchly refuses to ask. Why? Because the state is most likely unwilling to admit that the National Spatial Strategy and the IDA/EI mandates to produce jobs for regions is failing. Ireland has natural hubs of jobs and jobs creation potential - Greater Dublin area, Cork area, Galway-Limerick area. This is where jobs concentrate and where companies want to be. So how about a challenge to CSO - ask an important question, will you? Have some gumption...

Back to data: labour force participation rates next 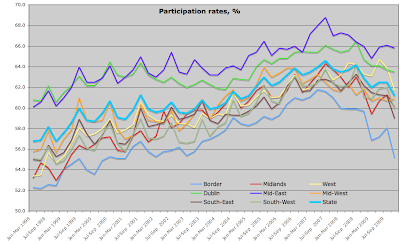 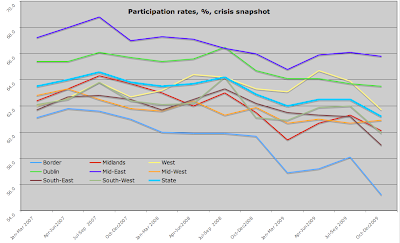 What the charts above show is the precipitous decline in labour force participation rates since the peak of H2 2007. And these declines are worrisome, for we normally tend to ascribe the destructive effects of the economic crises to unemployment, forgetting about those who leave the work force altogether. Well - take a look at charts above.

Another disturbing realization on the foot of the above charts is that regions with lowest participation rates also tend to be regions with higher unemployment. This is important because it signals that even in a small country like Ireland, mobility between residential location and work location is still restricted (by distance, lack of proper roads, transport shortages etc). It also suggests that in the long run, areas with higher unemployment tend to become traps for non-participation in labour force. The vicious spiral of being jobless in an area with no jobs creation leads to becoming disillusioned and dropping out of the work force for good.

And this implies higher rates of overall dependency. Remember - these are numbers for able bodied adults. So if we take the rate of unemployed and add to it the rate of those who are not in the labour force, we get a proportion of population that needs someone else to work for them to sustain themselves. Now, a caveat here - of course some of those who are not in labour force are gainfully engaged in work at homes - non-market activities that are productive and include, among other very important ones, like carrying for the elderly or ill, raising children etc. These, however, are not the majority in these numbers. Nor are they likely to be distributed predominantly into higher dependency areas of the country. So conclusions presented below stand: 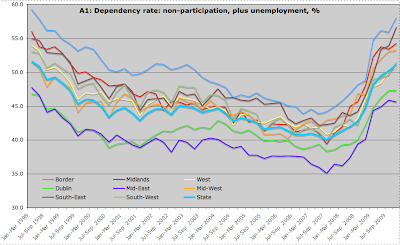 Predictably, the lowest dependency ratios are in high work regions: Mid-East and Dublin. And although these ratios rose in these two regions through the crisis, they are still well below the national average and leagues below the dependency ratios for the likes of Border and South-East regions. Here's a closer look: 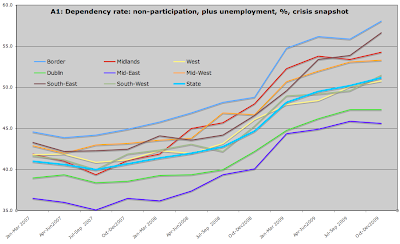 Of course, what these trends mean is that throughout the entire series duration (from 1998) Dublin and Mid-East have acted as a subsidy generating regions for the rest of the country. Someone had to pay for the higher dependency rates in regions that are above country average (since the welfare rates are not varied geographically).
Posted by TrueEconomics at 8:47 PM

This post highlights what we already know about the distribution of employment in the country. It's sad to see things haven't changed.

Some reasons Dublin and Mid-East do much better than the other areas of the country is because of their:
Existing size & population, Position relative to the UK, Good airports/ports, also large part of the Gov is still based in Dublin.

On the subject of unemployment black spots and Dublin and Mid-East subsidising the the other parts of the country, I wonder, for the West:

1) How different things would have been for the West had Ireland not be bequeathed so much of her fisheries to the EU?

2) Why is it that Galway, being 1 of the central hubs in a development strategy doesn't even have a proper airport? It has a 1289 m runway.
You can see the standard required lengths here: http://en.wikipedia.org/wiki/Runway#Runway_length

3) In the future will the west coast have an industry in offshore wind generation?
Will there be an industry created from recent the Gas discoveries? Are there other oil/gas fields deposits off the west coast?
How can Ireland (and the west coast) best benefit from these industries?
I can see energy generation, having to potential to turn around the fortunes not just of the west of Ireland but also the entire country.

A rural to urban migration is ongoing in ireland for as long as I remember. When my brothers and sister moved to Dublin and UK that leaves my parents and me at home.
With 1 parent retired that leaves a dependency ratio of 2:1 geographically but for the entire family it is 6:1. If we had been born a Dublin family that ratio would be 5:1 geographically.
Your point that dublin is the economic hub of the country is correct but I'm not sure how meaningful the dependency ratio assertion is - surely in the main it is just a function of the rural to urban migration.