May tax revenues are behind Budget plan, as talk about recovery is intensifying.

Recall, April was the month of allegedly improved (aka above the plan) tax revenues. May came in, bringing about a double whammy:
Oops. Tax revenue came up to €3.11bn in May or €141mln behind the target. This brought the annual (to-date) position on revenue side to some €148mln below target. Annualized rate of revenue decline is down to 10.4% (massive, still) from 10.8%. Budget assumes that tax revenue for 2010 will be 6% behind 2009 - €31.05bn instead of €33.04bn collected for 2009. I don’t want to venture a forecast here, but we are clearly in the uncharted waters of volatile bottom bouncing.

Here are my charts, per usual: 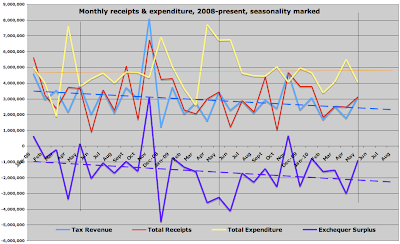 Chart above highlights seasonal cyclicality: Tax revenue up in May – just as it done in 2008 and 2009, but the swing is shallower than in previous 2 years. Total revenue uptick in May is better than in 2008 (when there was actual slight decline in the series), but the same as in 2009. Total expenditure is down, just as it did in May 2008 and 2009, although decline in 2008 was stronger. So we are somewhere in-between in terms of dynamics – neither 2008 with its calmer Exchequer conditions due to lags on revenue side, and the extremely disastrous 2009.

To-date, 2010 is shaping out to be on a slightly better local trend than the linear trend line for 2008-present, when it comes to tax receipts, although the local trend is still downward. Ditto for the upward trend in expenditure. Notice that we undershot expenditure trend by about as much as in 2008 and there is a significant improvement on 2009.

In short, there is no dramatic change between previous years and today. The crisis is still in full bloom, folks.

Some annual comparisons due: 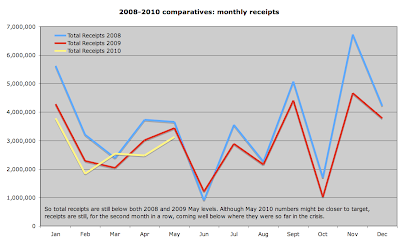 You can clearly see how in comparative terms, monthly receipts so far been coming in at below 2009 levels except in March. Was that a boost due to scrappage scheme and the combined effect of 2010 license plates luring in the silly vanity buyers (we still do have folks who think a lower range car with 2010 plates beats a higher range one with 2007 ones – the Celtic Hamsters, as I would call them: stripes and all, but clearly short of Tigers. Also, notice that May 2009 uplift in receipts brought the monthly figure closer to May 2008 than current uplift shifted us toward May 2009.

Here is a crude comparative to the ‘target line’ – drawn based on the basis of -6% deviation in receipts. Now, these are monthly receipts, so it is not exactly coincident with the ‘real’ DofF target line (which, frankly, I can’t be bothered to trace as it is irrelevant, as long as the annual target is set at 6%). If you assume that there will be a pick up in revenue (outside the seasonality factors) in the second half of the year, hold your hopes for the annual figure to come on-target. However, my ‘target’ line is telling: 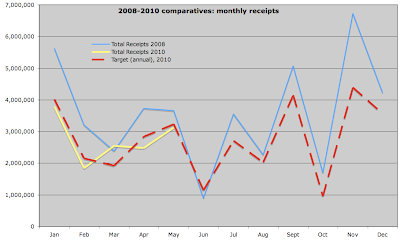 We are clearly underperforming the ‘target’ so far, although we are moving close to it. Another interesting feature is the comparative between the ‘target line’ and 2008 revenue, clearly showing that we are in for another shocker of a deficit even if we hit the target. The reason is simple – our current expenditure is not really declining significantly relative to 2008. Which means that unless revenue surprise in H2 2010 will be a massive one, the deficit is going nowhere compared to the 7-9% objective set out by our counterparts in the PIIGS. 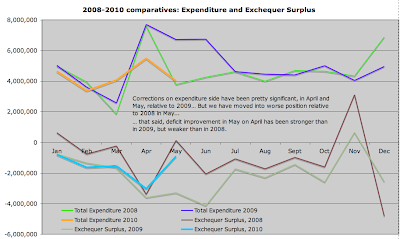 Chart above shows another set of comparatives. This time on the expenditure side and deficit. On the expenditure side, we are running much closer to 2008 figure this year than in 2009. But we are still above the 2008 level. On deficit side, we are better off than in 2009 since March, but still worse than in 2008, although the gap is closing in May relative to January-March. One wonders what will happens once the latest Live Register changes hit the unemployment rolls and their income taxes stop flowing in, over months ahead. Remember, there are lags here as some of the redundancy payments are taxable. 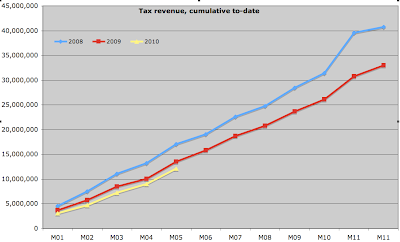 It is clear just how resilient our underperformance, relative to 2009 and 2008 is over the 5 months of 2010. Take a look next at total receipts, with the aforementioned ‘target line’ in: 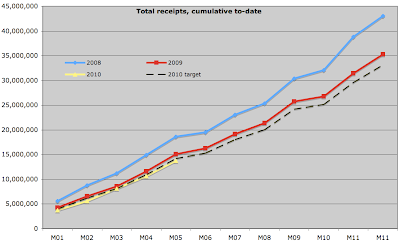 Again, underperformance is evident. What is dramatic, however, is that after rounds upon rounds of various tax increases, charges, duties etc rises, we are still nowhere near seeing an uplift in tax revenues. A Laffer curve? Perhaps. Alternatively – collapse of the tax base? May be both. It is, nonetheless clear that following the Unions-suggested path of ‘tax em, don’t cut spending’ is not an option.

Total expenditure comparatives. There has been much said – domestically and internationally – about dramatic cuts in public spending. Really, folks? 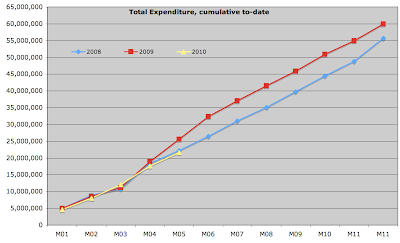 Tell me if I am not seeing something, but the yellow line is not showing any really dramatic cuts – not the ones you’d expect for a country with 14% deficits.

Suppose we decided to cut half of our deficit out of expenditure side alone (presuming the other half comes out of increased revenue – despite this being unrealistic, entertain such a possibility). Let’s call this scenario ‘½ target line’. Alternatively, suppose the entire adjustment to 3% deficit was to be carried out of expenditure side – call this scenario ‘full target line’. The following will be consistent with an expenditure target, relative to 2009: 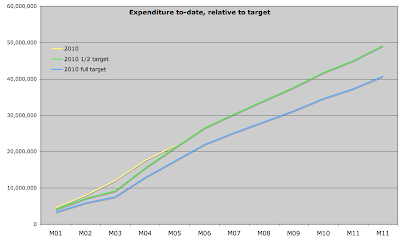 So we are doing no too poorly in terms of ‘half-target’ line, implying that the Government is aiming to either dramatically raise taxes (and hope that it will result in a significant revenue uptake), or they are hoping to discover some sort of precious metals deposits somewhere in the bogs, perhaps at the end of a rainbow. Otherwise, we are not on track to any fiscal recovery, just to a moderate decrease in the deficit.

To Government’s credit, however, let us note that spending is down 8.9% yoy over the first 5 months. Then, of course, to their discredit – most of this decline came out of cuts to capital spending. Note also, reductions in spending are running on 2009 figures. That means that yoy we are currently saving some €1.7 billion (over 5 months) – a sizable chunk. Capital side of spending accounts for €890mln of that. Sounds like pretty fair? Well, not really – capital spending last year was held back until later in the year. Which means that in real terms, capital spending in the first 5 months of 2010 is a whooping 36% down on the same period in 2009 and is running at roughly 20% below 2009 annualized rate of spend. And the source of these capital savings? Oh – DofTransport and DofEnvironment – the two account for some 70% of the cumulative 5-months shortfall.

So the strategy might be: cut spending on roads and transport, charge people more for poor quality commute (‘carbon’ tax and fuel excises) and replenish the coffers… In other words, don’t dare call it a tax on income, but the twin contraction in investments in improving transport and expansion of taxes on commute are in the end exactly that. Unless, of course, you are in the Dail or Seanad – in which case, it’s Alice in Wonderland life for you, courtesy of commuting subsidies.

Current spending is only 5% below last year’s, generating savings of €850mln – bang-on with expectations. This masks two sub-trends: 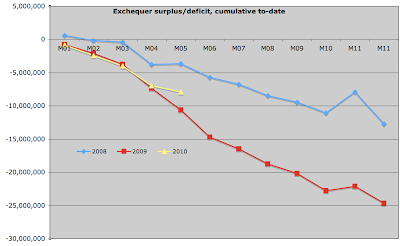 Yes, the deficit is improving on cumulative basis and on 2009. But we are far off the deficit figures for 2008 and our dynamics are pointing to no convergence toward 2008. Now, recall that in order to return back to 2008 deficits we need to also take into account that since 2008, Irish economy has contracted significantly. In other words, the task of restoring 2008 deficit levels (not spectacular either) will take even more cuts out of us today than we are so far willing to deliver.
Posted by TrueEconomics at 12:22 PM

So its a case of let the next crew deal with the mess.
No inclination or courage to deal with a gargantuan problem.
JPC

The increases in the tax take (health levies/income levies, etc)
are offset by a smaller amount of people being in the taxbase either through unemployment and/or emigration etc.