As G20 leaders undertake another attempt at injecting some balance into global economic order - with last meeting in Pittsburgh focused on stimulus strategies, while the current one in Toronto focusing on austerity - it is worth taking a look at the stakes.

Bank of Canada estimates that disorderly (or uncoordinated) exit from global stimulus phase of the recession can lead to a loss of up to USD7 trillion worth of output, primarily concentrated in the advanced economies.

However, the story is more complex than the simple issue of whether G20 nations should opt for a fiscal solvency or for a continued monetary and fiscal priming of the pump. Here are the key stats on the leading global economic blocks, revealing the structural imbalances that suggest the real problem faced by the advanced economies is the debt-driven nature of their fiscal and private sector financing. 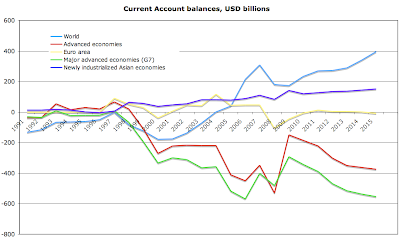 First chart above shows Current Accounts for the main blocks, including the G20. Two things are self-evident from the chart. Firstly, the crises had a crippling effect on the overall trade flows from the emerging economies to the advanced economies, though this came about mostly at the expense of countries outside Asia Pacific. Second, crisis notwithstanding, IMF forecasts (data is from IMF April 2010 update to WEO database) the trend remains for unsustainable trade deficits for the Advanced Economies. European (read: German) surpluses of the last two decades are going to be wiped out in the post-crisis scenario, but it is clear that the US, as well as other advanced economies, will have to face a much more severe adjustment toward more balanced current account policies in years to come.

These adjustments will have to involve government finances: 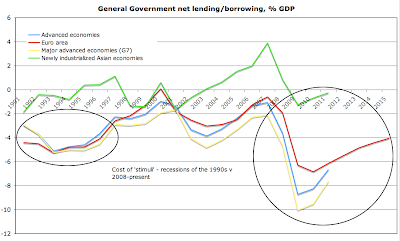 Chart above shows government deficits, highlighting the gargantuan size of the fiscal measures deployed by the US and European countries, as well as a massive stimuli used in some 'Tiger' economies and China, over the latest crisis. This puts into perspective the size of the austerity effort that has to be undertaken to bring fiscal policies back to their more sustainable path. You can also see the relative distribution of these adjustments - the gap between the red line and the blue line. This gap is accounted for, primarily, by the UK, Japan and US and is much smaller than the overall Euro area contribution to G7 deficits.

But there is more to the deficits picture than what is shown above. Expressed in terms of percentages of GDP, the figure above obscures the true extent of the problem. So let's look at it in absolute dollar terms: 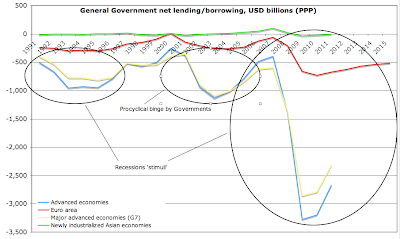 Now you can clearly see the mountain of debt (deficit financing) deployed in the crisis. Someone, someday will have to pay for this. It will be you, me, our children and grandchildren. Can anyone imagine that things will get back to pre-crisis 'normal' any time soon with this level of deficit overhang on the side of Governments alone?

What is even more disturbing in the picture is the position of Advanced Economies in the period between the two recessions. It is absolutely clear that Advanced Economies have lived beyond their fiscal means, even at the times of plenty, running up massive deficits in the years of the boom.

This puts to the test our leaders (EU and US) claims that the banking system reckless lending was a problem. The banks were not shoving cash at the Clinton-Bush-Obama administrations, or at European Governments. Instead, just as the banks were hosing their domestic economies down with cheap cash, courtesy of low interest rates, Western governments were hosing down their friends and cronies with deficit financing. The two crises might have been inter-related, but both fiscal profligacy and banks reckless risk-taking are to be blamed for our current woes.

Irony has it, neither the banks, nor the political profligates have paid the price for this recklessness. 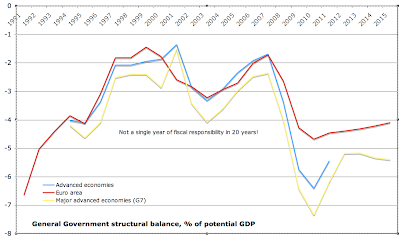 Hence, the dire state of the governments' structural balances. As chart above shows, in the entire period of 20 years there was not a single year in which advanced economies (G7 or G20 or the Euro zone) have managed to post a structural surplus. Living beyond ones means is the real modus operandi for the advanced economies' sovereigns. Expressed in pure dollar terms: 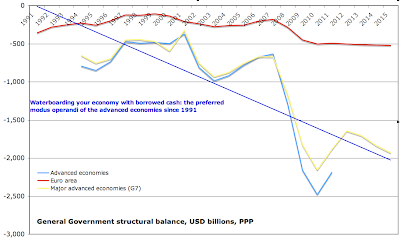 Now, on to the levels of economic activity: 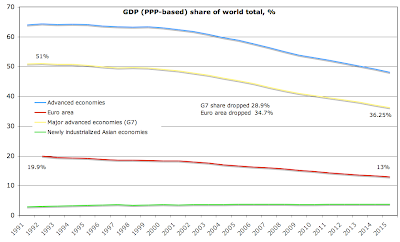 As I remarked on a number of occasions before, the whole idea of the Advanced Economies decoupling from the world is really a problem for the Euro area first and foremost. want to see this a bit more clearly? 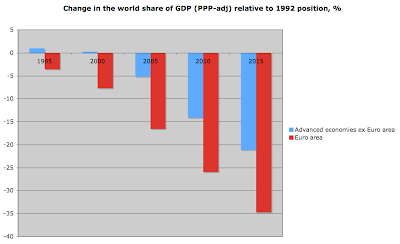 Look at G7 plotted above against the Euro area and ask yourself the following question. G7 includes Japan - a country that is shrinking in its overall importance in the global economy. This contributes significantly to the widening gap between the world income and G7 income. But the region in real trouble is the Euro zone. Again, this puts Euro area problems into perspective:
In short - decay? or put more mildly - Japanese-styled obsolescence? Whatever you might call it, the likelihood of the Euro area being able to cover its debts and reduce its deficits is low. Much lower than that for the US and the rest of G7 (ex-Japan).

Some revealing stats on savings and investment: 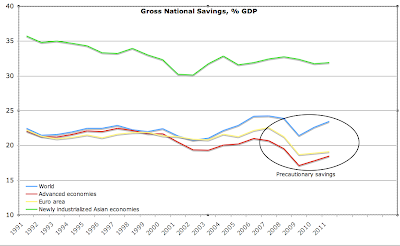 Clearly, chart above shows the opening of the gap between the need for demographically-driven savings growth in the advanced economies, where ageing population is desperately trying to secure some sort of living for the future, and the lack of real savings achieved. It also shows the downward convergence trend in rapidly developing economies, where younger population is finally starting to demand better standard of living in exchange for years of breaking their backs in exports-focused factories.

Yet, as savings rose during the peak in advanced economies (pre-crisis), investment was much less robust and it even declined in rapidly developing economies: 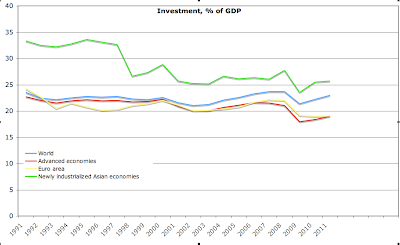 Why? Because of two things: much of domestic savings in Advanced Economies, especially in Europe, was nothing more than the Government revenue uplift during the boom. In other words, instead of European citizens keeping their cash to finance future pensions, Governments were able to increase expenditure out of booming tax revenues and borrowing against the booming savings rates. Ditto in the USofA (although to a smaller extent). In the mean time, Asia Pacific Tigers started to finance increasingly larger proportion of fiscal imbalances in Advanced Economies, driving down their domestic investment pools and shifting their domestic savings into foreign assets. Which, of course, is an exact replica of the Japanese global investment shopping spree of the 1980s - and we know where that has led Japan in the end...

So the scary chart for the last: 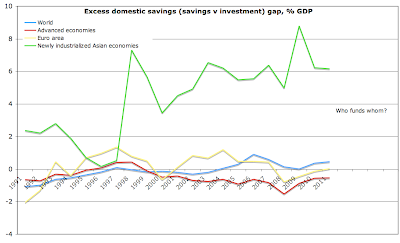 The big question for G20 this time around will be not the stated in official press conferences and statements - but will remain unspoken, although evident to all involved: Given that over the last 20 years, advanced economies financed their purchases of exports from the rapidly developing countries by issuing debt monetized through savings of the developing countries, what can be done about the current twin threat of excessive debt burdens in advanced economies and the shrinking savings in emerging economies?

This is a far bigger question that the USD7 trillion one posited by the Bank of Canada. It is a question that will either see some drastic changes in the ways world economy develops into the next 20 years, or the permanent decline of the advanced economies into Japan-styled economic and geo-political obsolescence.
Posted by TrueEconomics at 10:56 PM

http://www.sd-commission.org.uk/publications.php?id=914
looks like this could be the future then

Otherwise there won't be any 'Prosperity' left...

The party is coming to an end.
Well all that pension saving was a bit of a waste then.

but what if populations decreace !

If populations decrease, then in a linear fashion, use negative rate of growth requirement consistent with population decrease, corrected for the decrease bias (if population decrease is driven demographically by the dying of the older population, zero adjustment, if it is driven by the migration of the young - then you use positive adjustment to the extent of such migration - as your pensions and social security and health liabilities are suffering reduced revenue base today, while your future liabilities do not change - since people might come back).

Look, you have to be careful to distinguish Ireland from Japan. There are crucial differences:
Japan has a huge surplus of savings that can last them for a while. And Japan has a huge stock of capital that can help underpin public consumption for a while as well. Ireland has none of the above...

Either way, if populations decrease and per capita wealth rises because there are fewer people sharing fixed set of resources, I wouldn't exactly call that a national success story...

A different school of economics. The same idea.

Its getting very ugly. In Ireland.