This wasn't supposed to be news, folks. ECB has pre-announced that it will be closing down its 12 months lending facility some time ago, and the readers of this blog would have known this much - see here. So what's the rush to shout 'Stop!' now, then?

Well, it turns out that in the best European tradition, Euro area banks have conveniently decided not to do much about their deteriorating loan books, preferring the Ponzi scheme of monetizing their poor loan books via ECB funding, and ignoring all warning lights.

Per Bloomberg report today: the ECB said it will lend banks €131.9bn more under its 3-mo lending facility. European banks tomorrow will have to repay €442bn in 12-mo funds, assuming ECB wants to preserve the remaining shreds of monetary credibility and shuts down the pyramid game. So, promptly a week after Bank for International Settlements' dire warning that zero interest rates are leading to shortening maturity of banks & sovereign debts, inducing greater maturity mis-match risks for both, we have a roll over of 1/3rd of the ECB quantitatively-eased banks debts into a much shorter maturity instrument.

ECB said that Euro area-wide, 171 banks asked for the 3-mo funds at 1%, with banks allowed to borrow in the market at about 0.76% euribor and rising (again, the theme picked up by this blog ahead of general media attention: here).

And there is not a chance sick-puppies, like Irish, Greek, Spanish or Portuguese banks, can borrow at the euribor rates. Instead, as the Indo reports today, Fitch ratings agency estimates that the Irish banks borrowed a whooping 12% of the €729bn the ECB has lent to all Euro area banks in 2009. Some of this is accounted for by the IFSC-based facilities. But some, undoubtedly, is held by the Irish banks, and their own IFSC affiliates. Not surprisingly, Irish banks shares have been running red in days preceding July 1...

The liquidity fall-off curve is getting curvier for Irish banks, to use Bertie Ahearne's model of dynamic analysis.


Bloxham morning note reports on an interesting development: the Arms index - an index measuring overall bullishness (for values <1.0)>1.0) of the stock markets "rose to one of the highest levels in at least the last seventy years yesterday rising to over 16 before closing at 5.88". This is an extreme move and at these valuations it is consistent with the overall markets bottoming. As Bloxham note states, "what is fascinating is that yesterdays extreme reading was in fact higher than the 11.89 found at the absolute bottom of the 1987 crash. The pullback in February 27th 2007 also ended on an extreme reading of 14.84." Here's the chart - again, from Bloxham's note: 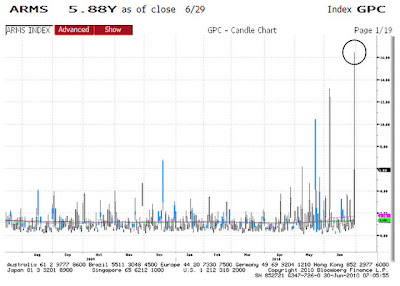 Exceptional!
Posted by TrueEconomics at 10:49 AM

I commented on the alphavile site that the weekly MROs have been steadily growing since Jan http://bit.ly/95Rqe1 to now stand over €160bn.

Lots of debt seems to be getting much shorter. All very reminiscient of autumn 2007, and we all know how that played out - only last time Hurley assured us all Irish banks had no exposure to US subprime debt. I wonder will it be as easy for Honohan to tell us that Irish banks have no exposure to sovereign and bad debts?