Here is an interesting set of data for some of the world's leading cities in terms of their contributions to country GDP and their share of total population. Sizes of the bubbles reflect the ratio of contribution to GDP to share of population. Greater Dublin is taken as per CSO: Dublin plus Mid-East region. 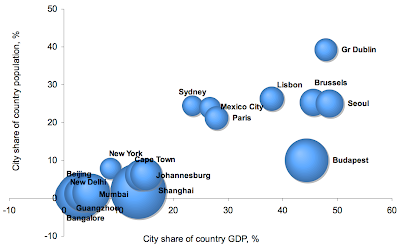 To me, this really does put into perspective the necessity for continued investment in the Greater Dublin region and the futility of our serial National Spatial Development Strategies.

We hear so much about the massive urbanization in the emerging economies, especially in the East. This process, in fact, is very much a reality. But what we do not hear about is urbanization of our own economic activity. The fact that Dublin stands out amongst the most urbanized zones, relative to the rest of the country, in the world is telling me that Ireland should focus more attention on developing the Greater Dublin region to reflect the reality of demand of the firms' and workers' for its location.

Updated: see the same chart with Dublin only: 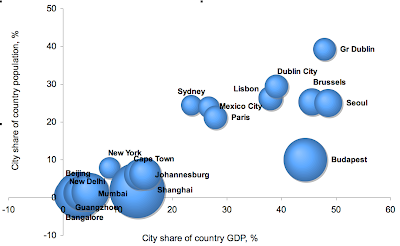 Note: per CSO "The Mid East region (Kildare, Meath and Wicklow) and the Dublin region are affected by a substantial proportion of their workforce living in one region and commuting to work in another." That's as much of a 'definition' as we get to reflect the most likely fact that vast majority of commuters are to Dublin...

And here are the inputs that went into the above charts: 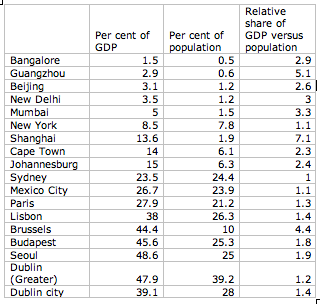 And the source for Dublin figures: National Accounts, regional incomes: 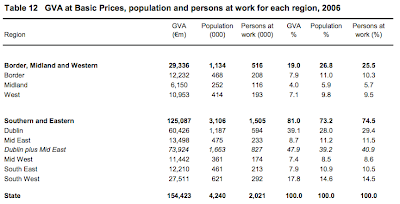 Notice that Dublin City's overall relative weight in the economy (ratio of share of GVA to share of population) rises relative to Greater Dublin, as expected, in line with the evident 'bedroom communities' nature of Mid-East region. Just look at the CSO figure for Mid-East share of GVA.
Posted by TrueEconomics at 10:07 PM

This problem is a historic legacy of the Fianna Fail/developer nexus.
The inner core of big developers (many of whom are now nestling in NAMA) have-by virtue of their skullduggery and hence untaxed profits during past decades- had the cash to enter into long term purchase option agreements with farmers/landowners in the Dublin area up to twenty years before development time.
They still have a stranglehold on virtually all development land in the Leinster area,so as to manipulate the market for the next generation of young house buyers.
Only legislation to appropriate building land at agricultural value plus a modest premium will enable our children's children to live unencumbered by the millstone mortgages that have now destroyed the competitiveness of the nation.

Sorry. Can't agree with this one Doctor. And that's a first. Normally I'm a huge Gurdgiev Groupie but Dublin has such a huge immigrant intellectual advantage, The "Bog Brain Drain" so to speak, that the regions stand no chance. Outside Pharma or other FDI nuclei.
Could you reconsider?
Regards,
Joe

Joe, I am not sure what we disagree on? Yes, Dublin is the focal point of 'brain drain', for migrants internally. It is also the main centre for international migrants with skills and aptitude, knowledge and creativity. It is a human capital magnet, relative to other cities in Ireland (while cities are in general attractors for talent). This is not unique to Ireland.

Likewise, Dublin is clearly the preferred location for FDI (outside pharma and manufacturing)and domestic private investment.

In short, Dublin is the dominant demanded location for business. What I am saying is that there is no reason to fight this with artificial targets or subsidies. Ireland should "go with the flow" internationally present in other small open economies and focus more on developing Dublin (and other core cities) into globally competitive centres.

Some years ago I wrote this essay - a bit pushing the limits of urban-centric development further (here: http://www.architecturefoundation.ie/vb06/cg.html).

During the last boom Dublin struggled to keep up in terms of housing, transport and even conference venues. Continued investment in Dublin is fine (and deficit spending to do so is also fine), but investing in other areas to provide people and businesses choice is a sane thing to do.

Kevin, at what level of debt to GDP or GNP does your proposition fail? At what level of tax on all of us, who work and our children does this 'fine' become 'not fine'? At how high of a cost of borrowing would you say that net returns on such investments fall below zero?

"What I am saying is that there is no reason to fight this with artificial targets or subsidies"
if i understand you, It ok for small towns outside greater dublin area to have unemployment levels above 20%, if you look at IDA data, 60% of existing jobs in IDA targeted companies are in greater dublin area, but the greater dublin area only account for 24% of the population of the republic

your telling me that not 'Artificial'

No, Admin - it's a response to demand from investors for location they want to be in. That's natural. Artificial is trying to place a globally trading service with employees accustomed to living in a major urban centre somewhere outside one. Not only it is artificial, it is also an equivalent to telling your investor to get lost.