Liver Register numbers are out today, erasing much of the optimism that might have been building up about unemployment figures over the last couple of months. Here are the updated charts: 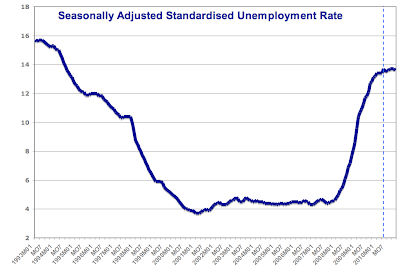 Unemployment rate is now rising again, reaching 13.7% after staying flat for the last four months at 13.4%. My forecast in January was that we will hit 13.5% in May. I was wrong. Well, not as wrong as some of our 'official' forecasters who were saying that we are turning the corner on unemployment... 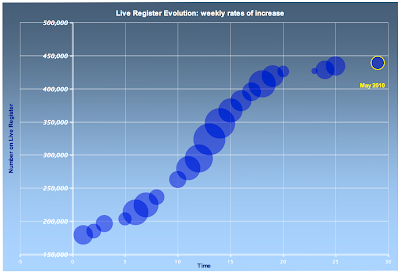 Notice 'missing' bubbles before May? That is because we had no growth in LR figures (they were actually shrinking) in February-April. Since the beginning of the year, mom, LR increased by 5,800 in January, fell by 2,300 in February, rose by 600 in March and contracted by 500 in April. With May increase of 6,600, we now have a net addition to the LR over the first 5 months of the year of 10,200. The Exchequer cost of these will be around €325 million per annum. In fact it will be probably higher as contractions in employment most likely have taken place in higher value added sectors, given that construction sector has virtually no jobs left to lose.

Taking a slower snapshot of the LR: 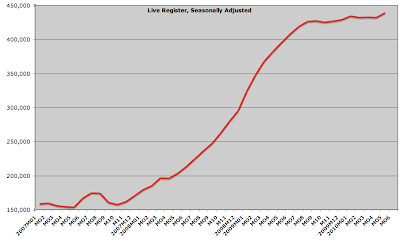 You can clearly see an uptick in the series in May. Given how relatively 'sticky' (trend-driven) LR is, this suggests that we might be heading for a new acceleration.

Next consider average weekly series. These are not seasonally adjusted: 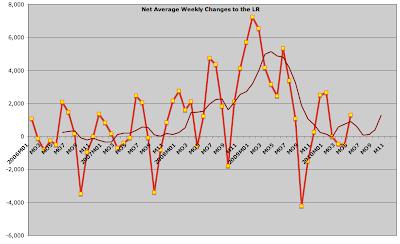 However, taking seasonally adjusted data and extracting monthly series shows that we are firmly above the 'stabilization' line of zero change in the LR mom: 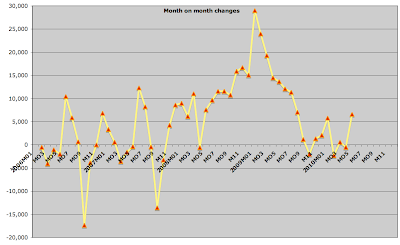 So here you have it - labour markets beg to differ from the Government's official line that 'all indicators point to a recovery'...
Posted by TrueEconomics at 1:01 PM

Constantin, the live register does not include people on Back to Education schemes, FAS schemes,
community employment and people claiming disability benefit.
Not to mention the people employed by state QUANGOS such as MABS, FAS,NAMA,NTMA<HSE
County Councils, Citizens Information Centres.

Lot of people coming off the BTEA end of June willstart showing up.

Constantin
Along with approx 45,000 to 65,000 previously self employed, and are now unemployed, but do not receive any benefits, we do not appear to be included in the statistics. As far as I know only those that are in receipt of benefits are classified as unemployed .the rest are not counted!