Latest monthly data from the CB is out and here are a couple of updates on series I've been covering before. 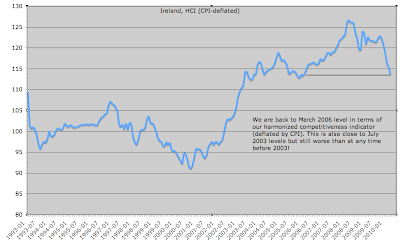 Notice some serious progression on competitiveness front is finally starting to take place. This is good. The trend is also good - strong downward trajectory in the series since November 2009. Accelerating again since March. Data lags should not be this significant, so I will be keeping a watch on earnings data from the CSO.

For all the good news, so far we are still in the zone of low competitiveness, down to March 2006 level and well above the period when Ireland Inc was performing at much stronger rates in the 1990s. Remember, these are real indicators, so price levels changes since the 1990s are factored in already. 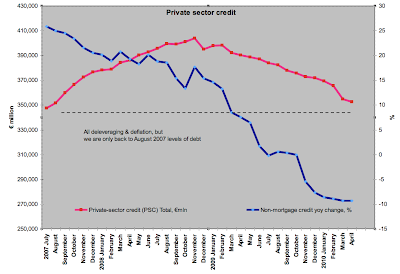 We are back to August 2007 levels and the fall rate is slowing down. Year on year change, subsequently, is flat at -9.3% same as in March. Too early to call it a recovery or even a full stabilization, as seasonality suggests that we might see some trend reversal in the short run. Remember, these are declines on already bottom-hitting 2009! 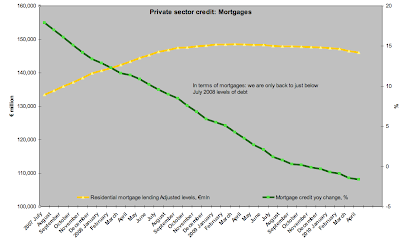 Levels are down to July 2008 and the rate of decline is -1.6% yoy, compared to -1.4% in March. This, however, can be due to a significant declines in mortgages due to write-offs of defaulting loans. In addition, this deterioration rate might be also masking the fact that pretty much anyone in distress who could have done so has already re-negotiated their mortgages in 2009. Thus, only the really tough cases are still sitting out there.

The data on actual new borrowing is below. At the aggregate levels, there is no turn around in household investment, which, of course, is the main leading indicator of recoveries. Also worrisome is the fact that there is no deleveraging of mortgages debt. 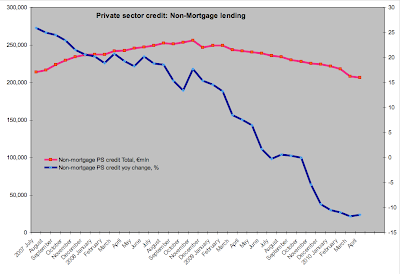 Private sector credit outside mortgages is dynamically virtually identical to the total private sector credit figure reported above. Year-on-year changes seem to be reflective of some seasonal effects, with improved rate of contraction in April. General trend is for flatter rates of decline overall since about January. This means little, however, as we need a term structure decomposition of credit in order to tell if this is really a flattening of the downward trajectory or simply restructuring of non-performing lines of credit. 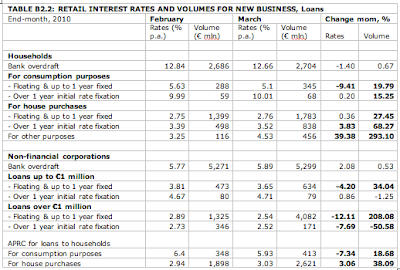 Notice that both for corporates and households, longer term rates are moving up, while shorter term rates are moving down. This likely reflects banks' and interbank credit markets' expectation for a steepening in the interest rate curve, plus some easing in wholesale cost of credit in March. Also note that mortgage rates for new, and especially for fixed rates, mortgages are rising. Hardly a robust support for the housing market.

On volumes side, there is a worrisome increase in all shorter term loans - a sign that both companies and households are reliant increasingly on short bank finance for operational and short-term credit. This might mean two things:
We can't tell which one of these forces is operative here. But it does not look to me like operational demand is rising naturally. Remember, so far we only have strong exports performance across the economy. This means you would expect an increase in trade credits (short-term). Most of trade finance in Ireland is actually not done via Irish banks, but through MNCs-own global arrangements. Apart from exports, it is hard to see where organic demand for short term loans would come from.

An even more interesting picture is emerging when we look at existing clients:

Notice how all of the rates changes (except for 5 year plus maturity corporate loans) are trending up? Are the banks ripping off their existent client base to beef up their margins? Well, lets put these changes side by side:

Notice that the above table comparisons are really only loose approximations. But there is a remarkable regularity with which existent loans holders are being loaded with the almost opposite type of changes in rates charged as compared with new clients.
Posted by TrueEconomics at 9:49 PM