Update: with a slight delay on this blog's timing - Reuters picks up the same thread here.


Another Monday, another set of pear shape stats.

First, we had a farcical conclusion to a farcical meeting of G20. If Pittsburgh summit was a hog wash of disagreements, Toronto summit had a consensus view delivered to us, mere mortals who will pay for G20 policies. This consensus was: G20 leaders called for
In other words, G20 decided that it is time to have a 4 course meal without paying for one.

Then , on the heels of these utterly incredible (if not outright incompetent) pronouncements by G20, Bank for International Settlements (BIS) came in with a stern warning to the Governments worldwide to cut their budget deficits "decisively", while raising interest rates. Funny thing, BIS didn't really see any irony in cutting deficits, while raising the overall interest bill on public debt. Talking of Aesopian economics - let's pull the cart North and South, in a hope it might travel West.

In many ways, BIS got a point: “...delaying fiscal policy adjustment would only risk renewed financial volatility, market disruptions and funding stress” said BIS general manager Jaime Caruana. Extremely low real interest rates distort investment decisions. They postpone the recognition of losses by the banks, increase risk-taking in the search for (usually fixed) yield, perpetuating nearly economically reckless financing of sovereigns that cannot get their own finances in order, and encourage excessive levels of borrowing by the banks.

Continued water boarding of the western economies with cheap cash through Quantitative Easing operations by the CBs risks creation of zombie banks and companies with sole purpose in life to suck in liquidity from the markets. Alas, the problem is - shut these zombies down and you have no means for monetizing public debt in many countries, especially in the Eurozone. Boom! Like the main protagonists in Stephen King's movies, governments around the world now need zombies to rush into their disorganized homes before the whole plot of deficit financing blows up in their face.
BIS also warned that many economic experts and central banks are underestimating inflation risks. And this is just fine, assuming you are dealing with short term investment horizons. However, for a Central Bank to ignore the possibility of a restart of global inflation - fueled by the emerging markets growth and later also supported by accelerated inflationary pressures in the advanced economies following the re-flow of liquidity out of the bank vaults into the real economy once writedowns are recognized and banks balancesheets stabilise - is a very dangerous game. inflation, you see, is sticky.

And inflation might be coming. Look no further than the Fed (here) and the US Administration insistence on the need for continued debt-financed stimulus.

Or, look no further than the movements in the interbank lending markets: 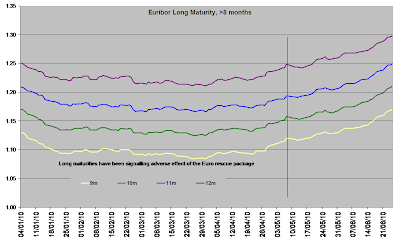 So the long term Euribor is up, up and away despite all the Euro area leaders' talk about fiscal solidarity funds and tough austerity measures. Think: why? Either the interbank markets don't believe in Euro area's ability to get its own house in order (which they certainly don't) or they believe that future inflation will be higher (which of course they do)...

Hence, shorter maturities are in an even more pronounced push up: 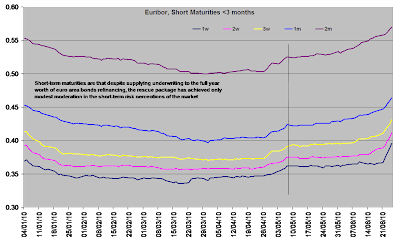 While dynamically, the trends are deteriorating: 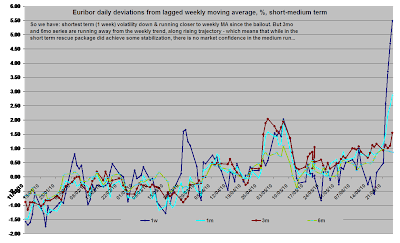 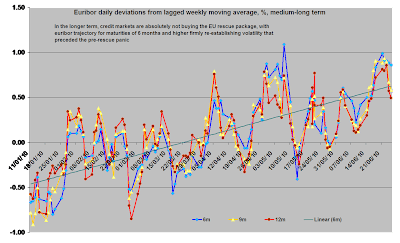 Now, think about the Irish banks (Spanish, Portuguese, Greek - etc) that are on life support of interbank markets and ECB. Can they sustain these credit prices?.. While facing continued writedowns?.. Don't tell I did warn you about these.
Posted by TrueEconomics at 12:56 PM