This is an unedited version of my Sunday Times column from January 19, 2014.

With Dublin property prices and rental rates on the rise optimism about bricks and mortar is gradually re-infecting our living rooms and feeding through to the government and banks' expectations concerning the mortgages arrears.

The good news is that, per latest data, there has been a decline in the arrears reported by the Department of Finance. Across the six main lenders tracked by the department, mortgages in arrears were down by 1,903 in November 2013, compared to September.

The bad news, however, is that the very same figures show that the banks continue to focus on largely cosmetic debt relief measures. In many cases such restructuring tools are potentially pushing distressed borrowers deeper into debt. The fact that Official Ireland lauds such measures as 'permanent' also indicates a lack of serious consideration of the risks faced by the distressed borrowers in the future.


Let's take a look at the latest mortgages numbers, reported by the Department of Finance. To caveat the discussion below, these numbers exclude smaller, predominantly sub-prime lenders, whose borrowers are currently nearly all in arrears.

Of the above, 20,325 principal residences mortgages in arrears over 90 days have been restructured representing just over a quarter of all arrears in this category of mortgages. This number is only 1,812 higher than in September 2013, and is down 89 on August 2013.

We do not know what exactly happened to the mortgages that were reclassified as no longer in arrears nor restructured. The omens are not great, however. Based on the Central Bank data, around half of all previously restructured mortgages relapse into arrears. Some properties have probably gone into repossessions or were voluntarily surrendered.

This lack of clarity signals a deep state of denial by our policymakers and civil servants of the true causes and extent of the crisis. Overall, figures supplied by the Department of Finance classify mortgages into ‘permanently restructured’ and ‘temporarily restructured’. There is no methodological clarity as to what these designations mean. The data reported is not audited and the process of restructuring to-date is not being independently tested by anyone. A systematic registry of various solutions applied by the banks simply does not exist and no one can see the models used in structuring these solutions and their underlying assumptions. The fog of secrecy surrounding mortgages arrears resolution process is thick.

Everyone involved in the process of mortgages arrears resolution knows that the real problem faced by distressed borrowers is the level of debt they carry. But restructuring data reported by the Department of Finance tells us nothing about total debt levels of the households before and after restructuring. Adding insult to the injury, our data excludes unsecured debt – a major barrier to mortgages sustainability and a huge obstacle to banks offering borrowers forbearance. No secured lender can be expected to agree a debt reduction plan for a mortgage, when unsecured lenders are expecting to be made whole.

The official data also separates principal residences from buy-to-lets, despite the fact that a large number of households with arrears on the latter also face difficulties funding the former. Are risks being shifted from one side of the household balancesheet to another?

We are living through a debt crisis of historically unprecedented proportions and yet we are still refusing to threat household debt in a holistic approach. Instead, the overarching belief in the system is that once a mortgage account is restructured, the borrower is no longer at risk. To achieve such an outcome, the bank can offer a household anything between extending temporary interest-only arrangement to offering a split mortgage.  A term extension, or arrears capitalisation, or a fixed repayments scheme in excess of interest-only repayments, or a hybrid of all of the above, is all that is officially available.

The strategy for dealing with distressed borrowers, therefore, is to roll the arrears into either a top-up to the existent mortgage or set up a future claim against the property, and forget the problem ever existed. In medical terms, the analogy is to removing a person off the hospital patients’ list, once she is transferred out of the emergency.

This treatment is problematic because it assumes that the distressed borrowers who went into the arrears will be able to service their new mortgages until full repayment. It further assumes that any future shocks to household finances and to the economy can be covered under the new arrangements.

Suppose a bank makes a mistake in its risk assessment of the proposed solution and, after years of making due payments, the household slips into financial difficulties once again. There is nothing in the system to address such a risk. The household will face the cost of the new crisis, plus the residual cost of the current one, plus the loss on all payments made between now and the moment the new crisis materialises.  In contrast, the bank faces lower cost. The officials responsible for the present system face, of course, no risks at all.

How likely is the above scenario? Per official data, 60 percent of all 'permanent' restructurings involved rolling up accrued arrears and/or stretching out repayments over longer time horizon. In other words, including interest payable, the debt levels associated with such restructurings are greater than those incurred under the original mortgage. This begs a question – how will these households deal with higher future interest rates that are likely to materialise given the longer horizons and larger life-cycle debts of their restructured mortgages? Another question worth asking is how can capitalisation of arrears address the original causes of the financial distress that has led to arrears accumulation?

At most, less than one in six of all mortgages in arrears have been ‘permanently’ restructured without risking an increase in the overall life-time debt levels. Only one in twenty five of all defaulting mortgages were modified on the basis of some risk sharing between the banks and the borrowers. The vast majority of Ireland’s distressed borrowers are expected to pay the full price of their own and bank’s errors. Instead of restoring debt sustainability to Irish households’ finances, the system appears to be aiming to provide only a temporary cash-flow relief.


The key stumbling blocks to the successful resolution of mortgages arrears are, unfortunately, the cornerstones of the personal insolvency regime reforms and of policies aimed at dealing with distressed borrowers.

These include the fact that Irish homeowners are facing the full cost of dealing with the banks without any support from the state. This stands in contrast to the UK model where these costs are usually in part or fully covered by the banks. High costs and cumbersome bureaucracy deter many homeowners from engaging with the banks and from seeking professional and independent advice in restructuring their debts. So far, only one bank, the AIB Group, has voluntarily committed to helping its distressed borrowers to access independent support. The rest of the Irish banking system, including the regulators, are happy to make borrowers pay.

The pilot scheme designed by the Central Bank to deal with the problem of unsecured debt has now run its course. There is a complete silence across the official channels about its successes or failures, or about its potential renewal. Which suggests that the scheme was a flop. Meanwhile, the banks are refusing debt reductions to mortgages arrears, often citing lack of cooperation from unsecured lenders. We will never know how many of the 59,620 ‘permanently’ restructured borrowers could have availed of some debt relief but were failed by the dysfunctional system.

More ominously, we have effectively no regulation over the resolution schemes advanced by various banks. For example, through November 2013, there were 6,090 split mortgages solutions extended. Vast majority of these involve lower cost of borrowing offset by a delay in debt claim realisation. In contrast, one of the major banks currently is in the process of developing a split mortgage product that will offer borrowers an option of converting the capitalised portion of the split back into normal mortgage at some point in the future. In exchange, the borrowers will be offered a sizeable debt write-off for a portion of their mortgage.  Such a product is vastly superior to all other split mortgage arrangements in place, but it will be treated as identical to them in future reports.

The latest data on mortgage arrears resolutions clearly shows that the Irish State is unwilling to forgive those who fell into debt distress under the hardship of the Great Recession.  Instead of helping families to overcome the debt problem, our system is designed to help the debt problem to gain control over the debtor. 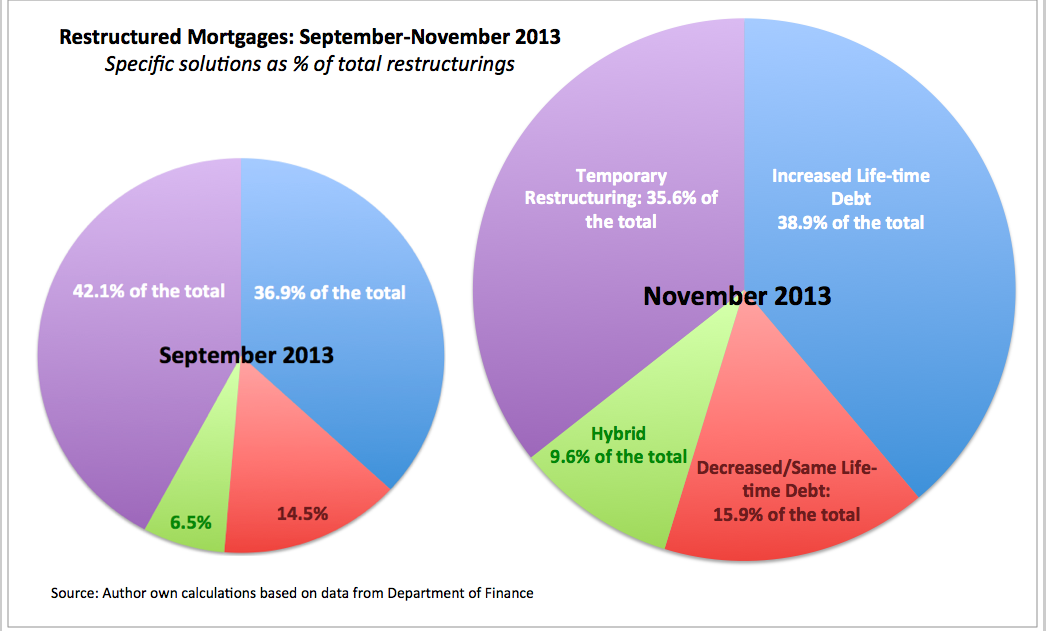 With the first issue of post-Troika Irish bonds safely away, it is time to reflect on the NTMA's opening gambit in the markets. Whatever one might say about the agency, its timing of this month's sale was impeccable. In the global markets, investment funds have been migrating out of fixed income (bond markets) and into equity markets pretty much throughout most of 2013. This trend is now accelerating. Usual bulk buyers of sovereign bonds are also starting to slow their appetite. Sovereign Wealth Funds, especially those located in Asia and the BRICS, are facing slowing domestic economic activity, reduced funding inflows from their exchequers and increased political pressures to reinvest domestically. Euro area banks, other large buyers of government bonds, are continuing to repay ECB-borrowed funds. They too are unlikely to demand significant amounts of Government bonds. And, looming on the horizon, large euro area issuers are about to swamp the market with fresh supply. Spain and Italy alone are planning to sell some EUR712 billion worth of new bonds to fund maturing debt and new deficits. All of this suggests that both supply and demand pressures later in 2014 can make it tougher for smaller euro area countries to tap the markets. Which makes NTMA's this month's timing so much wiser.

Posted by TrueEconomics at 4:30 PM