Quarterly National Household Survey is out for Q4 2013. Here is the first post looking at the sectoral jobs distribution and jobs 'creation' or rather employment additions.

The next post will cover aggregate employment levels data.

Key to tables below: red denotes reduced numbers in employment in specific sub-sector/sector, green denotes increases in employment. In the tables, I reference current level of employment on H1 2011 average - the period when the current Government came to power.

As the above shows, there was a massive recorded increase in numbers in employment in agriculture. These numbers are driven by the unknown factors, as they are impacted by revaluations applied by the CSO. CSO detail the issues involved with this data in their notes: http://cso.ie/en/media/csoie/releasespublications/documents/labourmarket/2013/qnhs_q42013.pdf
so there is no need for me to go into deep explanations.

Outside Agriculture, Forestry & Fishing, there were modest y/y gains in Construction sector, totalling just 400 jobs. For all the reported activity in the sector - with investors flocking to our shores and building industry posting alleged revivals, there is preciously little to show here in terms of jobs creation since the current Government came to power. Still, good news is that employment is up y/y. May this be a trend, rather than a blip. Construction sector employment has been trending at around Q4 2013 levels since Q1 2011, showing no serious uplifts.

In contrast, Wholesale & Retail Trade, etc sector saw massive drop off in employment, down 3,000 in a year through Q4 2013. The sector is now at the levels last seen in Q4 2004, and Q2 2013 was the second lowest quarterly reading over the current crisis period.

Transportation & Storage sector is basically showing the same signs as Construction sector, with a small rise in employment of just 600 jobs in Q4 2013 compared to Q4 2012. The sector is still down on H1 2011. Q4 2013 marks the second lowest Q4 on record for the period of the crisis.

Accommodation & Food Services sector is gaining jobs at a nice pace. Employment is up 23,150 since H1 2011 and of this increase, 17,400 came in the twelve months through Q4 2013. This is an unambiguous positive, since the sector is now very close to regaining 2007 highs in employment.

As above shows, things are slipping somewhat in the Information & Communication sector, with employment gains since H1 2011 running at a a strong 7,250 on H1 2011, but employment levels down modest 700 jobs in Q4 2013 compared to Q4 2012. Still, Q4 2012 was the absolute record level for employment in the sector, so some retrenchment, especially mild, is ok. The problem, of course, is that this sector is the focal point of all the talk about Irish economy becoming a haven for ICT services jobs. The technical and specialist jobs in this area go into this category, while business services jobs are absorbed into the next two categories.

The above explains why we are witnessing a significant rise in employment in Professional, Scientific & Technical activities sector, where employment rose 11,500 in Q4 2013 compared to H1 2011, and the rise was even sharper (by 13,000) in 12 months through Q4 2013. Very good signal, of course, is that employment in this sector of activities was on a strong rise now since Q4 2011 and we are now just 2,900 jobs shy of the all-time high posted in Q2 2008.

Public Administration & Defence have been shrinking in employment levels, with employment decline of 1,000 in 12 months through Q4 2013. Over the period from H1 2011, employment in this sector is down 6,800, which sounds impressive, as long as we assume that there was no reclassification of employees from this category to other state-controlled or state-related areas, such as Health and Education, Transport etc. I will blog on public sector employment numbers separately, so stay tuned for more analysis.

Education has returned higher employment in Q4 2013 compared to Q4 2012 - a rise of 1,600, but the levels of employment remain lower (by a very small number of 250) compared to H1 2011. It would be interesting to know if the latest changes are driven by private employment, part-time employment or full-time public employment. Alas, we do not have that information.

The chart below summarises the trends in Human Health & Social Work, Education and Public Administration & Defence: 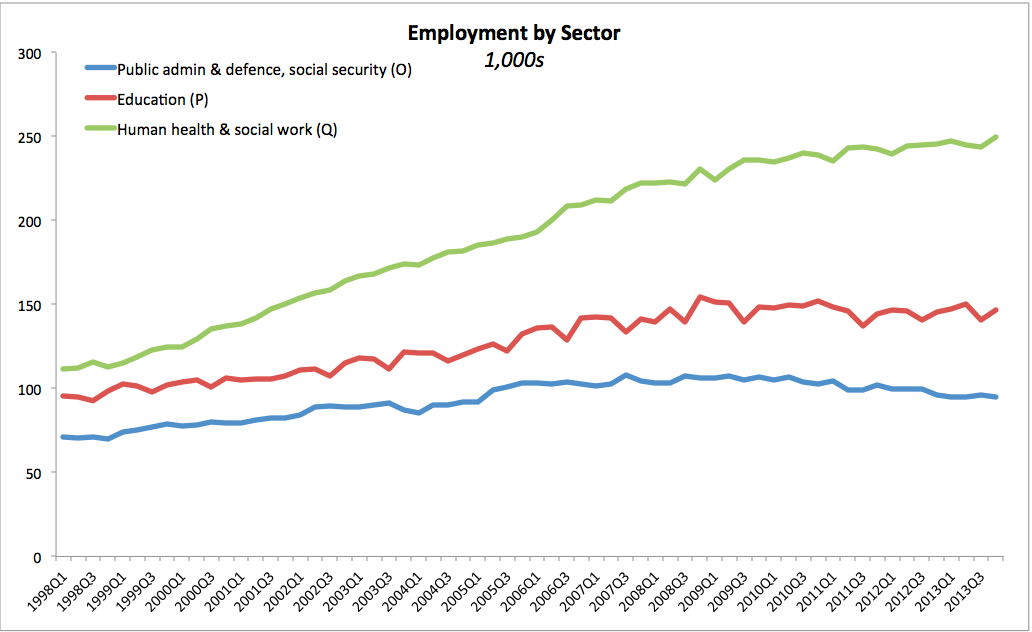 Back to table 3 above:

Industry employment (excluding Construction) rose strongly, some 6,400 in 12 months through Q4 2013, and employment growth is more moderate, at +4,650 when compared against H1 2011 levels. This is good news and confirms my thesis that we are witnessing some (albeit still fragile) organic recovery in the sector.

In the next post, I will take a look at the Total Employment, Non-Agricultural Employment, Public Sector and State-Controlled Sectors Employment and other core aggregates.

Posted by TrueEconomics at 5:35 PM