In the previous post (http://trueeconomics.blogspot.ie/2014/02/2722014-employment-by-sectors-qnhs-q4.html), I covered detailed breakdowns in employment numbers changes across various sectors of the economy. Here, I will briefly identify sub-trends relating to aggregate data.

A caveat: per my discussion before, I will also report here numbers in employment ex-agriculture. In my view, it is questionable as to how agricultural employment is registered in the first place, since many/some of today's famers used to be construction sector employees or self-employed contractors. How many? We do not know. How many claimed unemployment in the past and now, having run-out of benefits, declared themselves to be farmers or farm employees for the purpose of optimising extraction of subsidies or supports? We do not know. Hence, I will omit farming employment from consideration in one sub-set of the aggregate figures (clearly labeled and identified below). This is done not because all of the employment in this sector is somehow 'bad' or 'unproductive' but because


Definitions for table and chart below:
Table below summarises changes on H1 2011 average and Q4 2013:

High-value added sectors of employment showed weaker performance, adding only 12,100 new employees in 12 months through Q4 2013. This, of course, comes on foot of strong performance in 2012, as evidenced by the total number in sector employment rising by 23,600 between H1 2011 and Q4 2013.

Although it is unclear if they include any of the State Training Programmes participants (if they do, as we know they are excluded from unemployment counts), then the numbers are less impressive.

Dynamics across the categories are shown in the chart below: 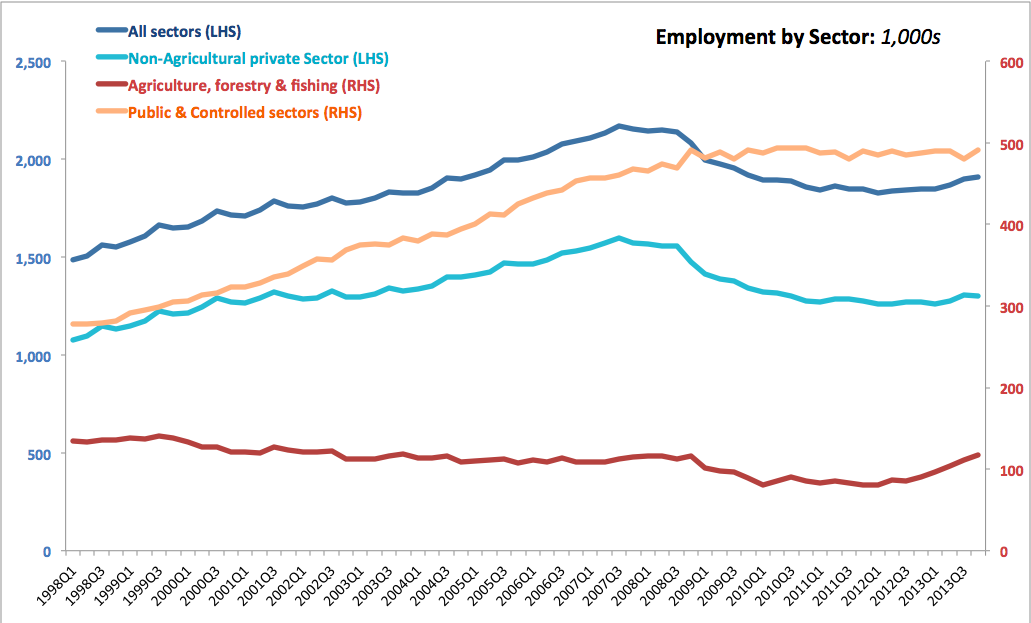 Dynamics across all aggregates are positive, with exception of the Public & State-controlled Sectors where things are moving sideways. Not quite down significantly and not up. Pick up in non-agricultural private sector employment is weak and unconvincing for now, so it would be good to see steady gains over 2014 in this category.

One thing to keep in mind is that the claimed 61,000 new jobs created is a suspect claim for two reasons:
1) It is subject to modification on the basis of quality adjustments (in part, I will do this when I am reviewing full-time vs part-time employment figures; and in part due to agricultural employment issues highlighted above)
2) The impact of the State Training Programmes, which are for now unknown in terms of how they register in the above data
On the other hands, there have been new jobs added in both higher value-added sectors and in non-agricultural private sectors, as detailed above. This, undoubtedly is a good news.

Posted by TrueEconomics at 12:17 AM