Monetary policy is not a nuclear science. It is not even anatomy, for what it matters. Instead, it is more like a simple task in civil engineering. Bank of Japan can get the message, the Fed wrote books on it, Bank of England has discovered it, Canadians, Swedes, Danes, Swiss, everyone has figured it out by now... Meanwhile, in the euro area, there is a whole lot of mystery, mystique, halls of mirrors and corridors of contortions, when it comes to the monetary policy. And a simple, plain-sight visibility of its failure…

Spot anything of interest? Oh, simples.com: M1 growth declines predate GDP growth and levels declines. No, seriously, since 2006, euro area could not manage one policy - money supply. Forget the intricacies of fiscal policy (it is not an easy job to spend money on stimulating economic activity, when you are in debt up to your ears), the EU simply could not put enough money into the real economy to prevent cash in circulation from shrinking.

How on earth can such a feat be achieved? Simple: the ECB pumped trillion euros plus into the banks, instead of pumping the very same trillion (and more still would have been needed) into the real economy. Frankfurt opted for loading money into the banks balance sheets . It should have opted for using printed money to pay down real economy's debts (households' and non-financial companies' debts) which would have (1) repaired banks balance sheets, and (2) repaired the real economy, restarting consumption and investment. Instead, we have a bizarre, senile, idiotic situation where we print money and then, de facto, lock it up in the vaults.

It would half as bizarre if it was just locking the liquidity in the vaults, but the euro area monetary policy is currently all about the repayments by the banks of the LTROs, or in different terms - burning of cash out of the economy. This is cutting down on M1 growth rate. Just as the M1 growth should be rising, not falling. Forget about doing the right thing at the wrong time… we are doing the wrong thing at the wrong time… and doing so repeatedly.

And the latest? Annual growth rate of M3 money supply is again slowing, to 1.0% y-o-y in December 2013 from already low 1.5% y/y growth in November. The law of under fulfilled low aspirations clearly at work: expectation was for 1.7% y/y growth in M3, and ECB delivered 1.0% - the lowest rate since September 2010. Oops, predictably, lending to the private sector remained at -2.3% y/y in December 2013, an all-time low. 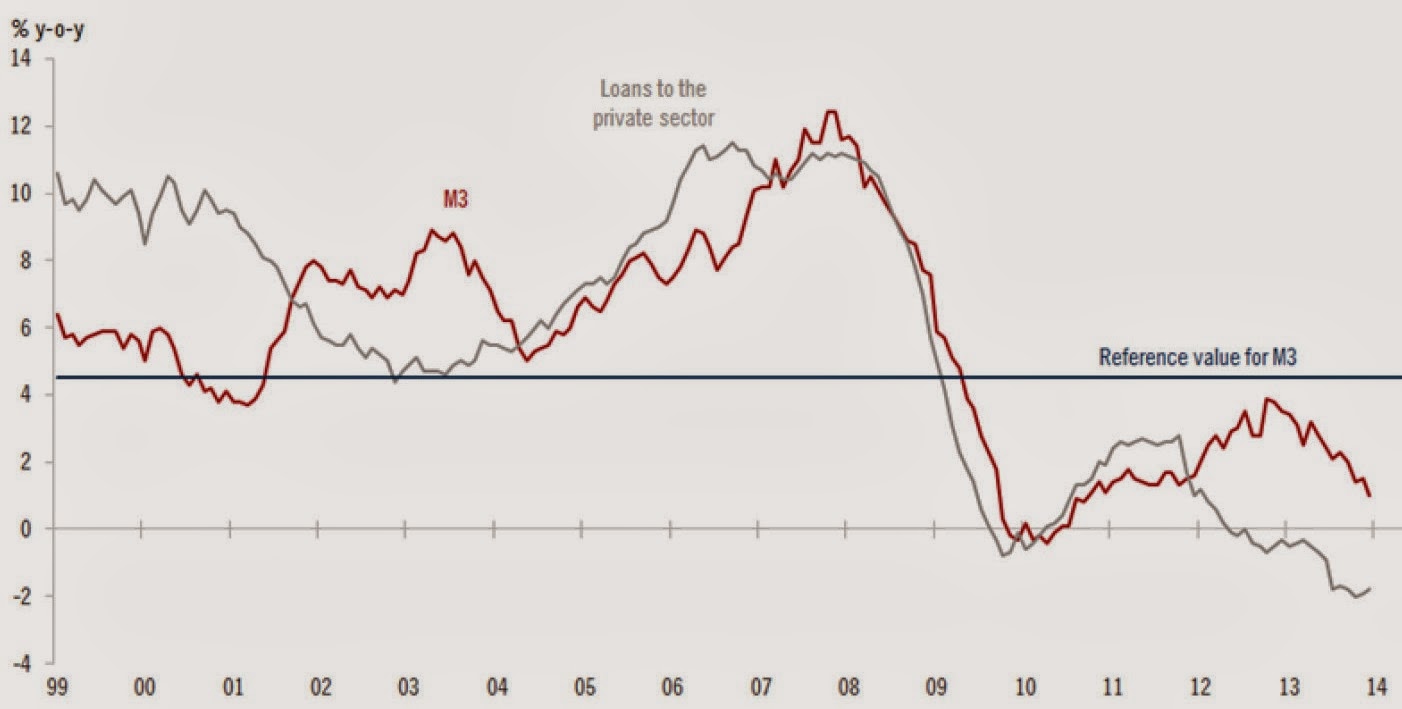 So for all its OMT, LTROs, BU 'policies activism', the ECB is now 5th year into mismanaging basic crisis-related monetary policy. Inventiveness and monetary engineering gushing out of Mario Draghi left, right and centre to the delight of the policy analysts and bonds salesmen, and the euro area is still where it was: below reference line on M3 growth.
Posted by TrueEconomics at 8:00 AM

Even Dorks got this some tome ago - so we must be dealing with deep corruption of structured & organised deflationary theft.

However - could you explain the local growth of Irish M1 in the context of declining credit aggregates.
Is this via the transfer of declining long term deposits and / or us farming external credit / money production via exports , tourists (and us not spending abroad) etc etc.

PS I think it is the core wanting all of our capital rations for themselves.
The Brits want their cars and the French their railways.
This is achieved however inefficiently via deflation of the periphery which also results in the destruction of local supply chains which typically supply local demand.....something very similar happened in the 80s..........funny that.

The Euro is the most diabolical scarcity engine ever created.
A loose credit / hard money ogre of now epic scale as it started to grow in the 1970s.