Bitcoin has been a focal point of many debates and discussions. None as important as whether or not the digital currency is a real currency.

"Late 2013 became an auspicious time for Bitcoin, a “virtual currency” launched five years earlier by computer hobbyists. During the month of November 2013, the U.S. Dollar exchange rate for one Bitcoin rose more than fivefold, and the value of one Bitcoin, which had begun trading at less than five cents in 2010, exceeded $1,200.00. Two days of hearings were held by the U.S. Senate Commitee on Homeland Security and Governmental Affairs, at which government regulators testified that virtual, stateless currencies like Bitcoin had the potential to play useful roles in the commercial payment system.

Stories appeared in the media about travelers subsisting for lengthy periods by spending only Bitcoin, and various businesses – including Richard Branson’s Virgin Galactic space travel startup – attracted publicity by agreeing to accept Bitcoin as payment. With approximately 12 million Bitcoins circulating, the worldwide value of the currency exceeded $14 billion, equal to the market capitalization of a mid-range S&P500 company."

Yermack argues that "Bitcoin does not behave like a currency at all. Instead it resembles a speculative investment similar to the Internet stocks of the late 1990s." In other words: not even a commodity...

Starting from the money as defined in economics: "having three characteristics: it functions as a medium of exchange, a unit of account, and a store of value. Bitcoin increasingly satisfies the first of these three criteria, because a growing number of merchants, especially in online markets, appear willing to accept it as a form of payment. However, …Bitcoin performs poorly as a unit of account and as a store of value."

Reason 1: excessive volatility: "The currency exhibits very high time series volatility (see chart below), which tends to undermine any useful role for Bitcoin as a unit of account. A currency should have only negligible volatility in order to be a reliable store of value."

Reason 2: no correlation with other currencies: "Bitcoin’s daily exchange rate with the U.S. Dollar has virtually zero correlation with the Dollar’s exchange rates against other prominent currencies such as the Euro, Yen, Swiss Franc, or British Pound. Therefore Bitcoin’s value is almost completely untethered to that of
other currencies, which makes its risk nearly impossible to hedge for businesses and customers and renders it more or less useless as a tool for risk management."

Reason 3: "Bitcoin lacks additional characteristics that are usually associated with currencies in modern economies." Which are: 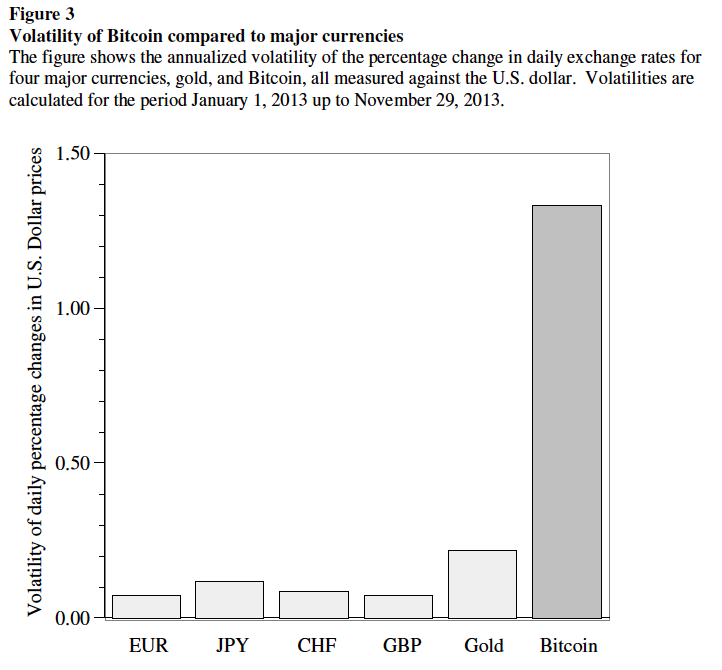 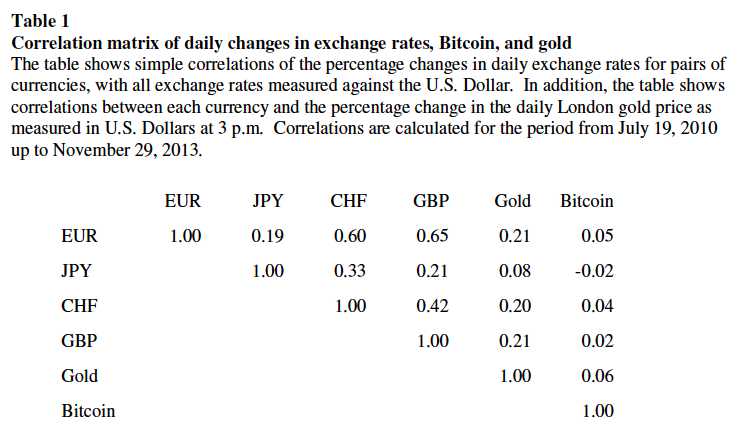 About the only steadily-advanced argument for Bitcoin is that it is a private currency offering anonymity. Alas, it might be the former, but it does not offer the latter. "The benign attitude of U.S. regulators toward Bitcoin, as revealed in the November 2013 Senate hearings, may stem from the existence of a universal online audit trail for Bitcoin transactions. Although many services exist on the Internet that purport to cloak Bitcoin transfers in anonymity, confidence in the security of these protocols appears to be naive. The arrest of Silk Road’s operator in October 2013, which took place amid widespread publicity of online data monitoring by the U.S. National Security Agency, disabused many about the possibility of keeping any information anonymous on the Internet. Tax evasion, money laundering, purchases of contraband, and other illicit activities using online transfers become far more difficult when the use of a virtual currency like Bitcoin can be reconstructed by governments that have sufficient technical skills."

Ouch!
Posted by TrueEconomics at 2:09 AM

If I make a bet with my friend that the value of bitcoin will have fallen by next Tuesday.am I not selling it short? I know I am supposed to be impressed by the terms such as 'forward contract' and 'contract for difference' but I find it very hard to be - particularly in the light of the Anglo trial testimonies. If people wanted to short bitcoin I'm sure they would and will. I just don't buy the characterisation of these cfds and the like as being healthy instruments through which the various stock and currency markets are somehow placed in balance.

Bitcoin has value; it can be used to purchase goods and services, therefore it is a real currency. And sooner or later it’s going to replace, or at least, became globally accepted as an international currency.