This week's acceleration in the Ukrainian crisis is moving the country closer to the final denouement of sorts. Sadly, the one we are currently facing is of a less palatable variety: absent strong (majority, not plurality) mandate, any Government - be it new or old - will face continued chaos, political upheaval, internal in-fighting, external corruption and voter polarisation, with little hope for a constructive outcome (for the outline of a constructive resolution, see: http://trueeconomics.blogspot.com/2014/02/622014-what-does-future-hold-for.html).

With this, there is little hope for a sustained economic recovery on the horizon and investors are likely to remain in the state of high alert and volatility.


Thus, the only way forward will be for President Yanukovich to call early elections and resign prior to these - an outcome that is likely to solidify deep divisions within the electorate and shatter the opposition. In the long run, the outrun of snap elections will be the worst case scenario, since a poll today will be unlikely to generate a stable government. A presidential vote in current environment will simply force Ukraine into the perpetuation of a lingering conflict that the country entered following the Orange Revolution.

Crucially, Russian debt support for Ukraine is likely to be revised if the elections produce an anti-Russia Presidency, and absent this backstop, Ukraine will require full EU and/or IMF assistance. Securing this assistance will be very painful and is likely to throw a newly elected leadership into another crisis. Furthermore, Ukraine seeking EU funding is a can of worms that no one, least of all Brussels, would want to open.

Absent a very strong popular mandate for an established and well-known (aka predictable in her/his policies) Presidential candidate, the uncertainty will continue weighing heavily on bond yields, the battered currency and the economy. This is already reflected in the analysts' valuations, with S&P rating Ukraine as CCC+ for foreign currency debt, with outlook negative, while ECR rates the country in the highest risk tier 5, ranked 125 in the world (for comparison, Russia scores 54.62 in ECR and is ranked 51st in Tier 3 risk category).

Economy will continue stagnating or even contracting in either scenario (continued Yanukovich presidency or snap elections), with GDP heading for another drop in 2014, after a 1.1% contraction now estimated (preliminary data) for 2013.

There is a third alternative to the currently unpalatable ones of snap elections or continued violence: a referendum on splitting the Ukraine into two states. Given that the Ukraine is deeply divided between Western and Eastern parts, the referendum held today will likely lead to a nasty split (Ukraine is no Czechoslovakia when it comes to civil culture, as we can see now). While in the long run this can prove to be the only feasible arrangement, in the short run it will likely turn violent and will lead to massive dislocations in social and economic areas.

About the only possible positive scenario is to combine the two unpalatable ones with a stop-gap in between or a cooling-off period. First, snap elections with a strong Presidential candidate with a base support beyond party-politics of opposition. Second, such a candidate should campaign on a promise to hold - say within 3 years - a national referendum on the future of Ukraine (loose federation or split). Third, following the elections, the President will require tripartite support from the EU, Russia and the IMF to fund a major investment deployment into the economy (a Marshall Plan) so the population can be de facto incentivised into voting to continue with singular Ukraine. Fourth, fingers crossed, prayers said, wood knocked… wait and see if the referendum goes the right way. Wait and hold more cash to help whatever merges out of the referendum to weather massive shock that will follow its outcome.


Some facts on economy:

Ukraine with double probability of default that of Greece... more than 4.5 times that of Russia... What was it that I said about the 'failed state' above?..

Update 2: some ECR scores for Ukraine: 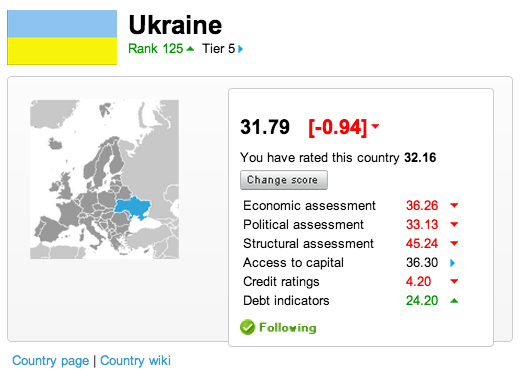 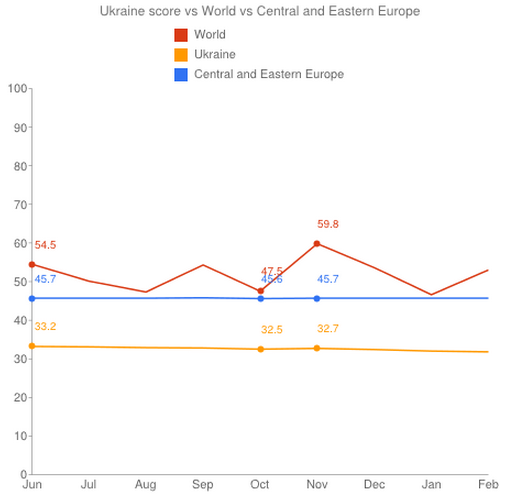 Update: Via ZeroHedge, here is the final agreement between President Yanukovich and the opposition: http://www.zerohedge.com/news/2014-02-21/ukraine-crisis-settlement-agreement-reached-full-statement As argued in my posts, the only sustainable resolution of the crisis will require shared power arrangement backed by enforceable commitments to elections and deep political reforms.
Posted by TrueEconomics at 10:11 PM