Now, in comparison, the US – economy on public spending (err stimulus) steroids – grew by 0.7% increase in GDP Q3 2009 and this growth was broadly present across all categories of expenditure.

The only net positive is that GNP contracted only 1.4%, which is much slower rate of collapse than 5.2% decline in Q1 2009 and even slightly slower than Q2 2009 fall of 1.7%. Nonetheless, the fall is still significant.

Thus, overall, GDP/GNP gap grew wider once again as the real domestic economy is still deeply in the recessionary dynamic. The GDP / GNP gap is accounted for by the “Net Factor Income from Abroad” or NFIa. As MNCs export more and more profits from Ireland, driven by increased transfer pricing through our off-shore accounting zone, NFIa rises. NFIa also increases as Government debt financing rises – and we know where that is coming from. And it does so as a proportion of the overall value added in the economy. Aptly, Q3 saw NFIa reaching record levels.

How important is the transfer pricing effect in Ireland? Chart below updates the earlier data on the GDP/GNP gap. But figures for sector activity show that while modern manufacturing sectors (Chemicals, Pharma, ICT – all dominated to the tune of over 90% by the foreign companies) grew in output by 6.5% in 2009, traditional sectors (dominated by domestic firms) collapsed in output by some 15%. Did anyone notice new factories supported by MNCs mushrooming over this year? Not really, So 6.5% ‘output’ increase is the MNCs booking higher value added to their Irish operations, assigning accounting value to the same products they manufactured here last year and booking more profits in Ireland at our 12.5% tax rate.

This is cool – it supports jobs here. But do not confuse this with Irish output. Or with Irish income. Or with the end of Irish recession. Lest you want to be that one-time invitee to a cool party who imagines himself to be the owner of a lavish host’s estate.

Now, let me update some charts. 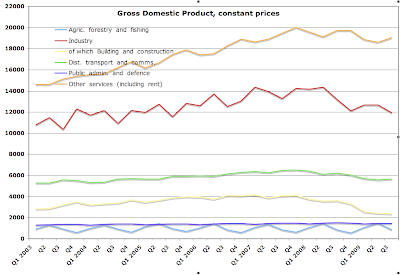 GDP at constant prices - all components are down. Even those that were showing improvement in Q2 2009 (Agriculture, Forestry & Fishing) or stabilization (e.g Industry) are now turning negative. Except for Other Services & Rents (gotta be Nama offices at the banks renting new facilities). 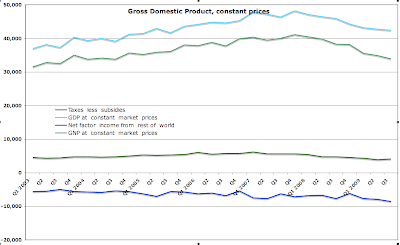 GDP is down in all measures at constant market prices, and GDP relation to GNP is fairly evident (more on this below). 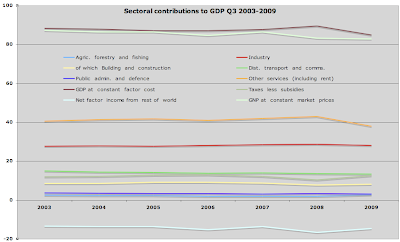 Again, no improvements on Q2 above. 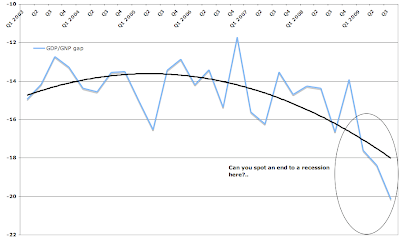 Yes, an end to a recession indeed. We've breached 20% for the gap - a full 1/5 of the so-called Irish income has absolutely nothing to do with Ireland except for the accounting ledger in MNCs offices. If this is growth - well, set up an imaginary ledger in DofF and start entering zeros to our GDP figure on a monthly basis.

Now on to value added in Irish economy: 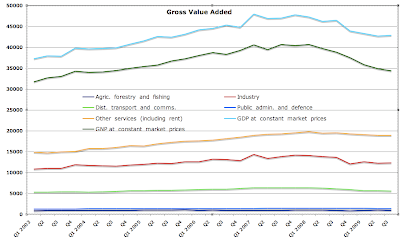 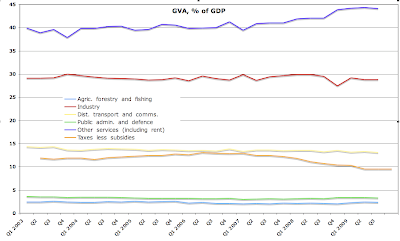 Things are now worse than they were in Q2 2009 in all sectors, save 'Other' and Agriculture.

This not an end to a recession. It is a recession running at pretty much the same rate as in Q2 2009.

The recession may be ending Constantin, but NAMA will choke Ireland for the next decade.

Excellent destruction of a petty falsehood!

But, whay do you neglect the mention of the depression undoubtedly destroying capital the world over? Australia is a timing difference as we offer the Han a chance to gamble on commodities.

Do you genuinely neglect mention of the changed world in order to not deepen our sorrows? Or do you consider that things will revert to some mid-2000s mean?