The Department of Finance has published estimates of income and expenditure for next year on Friday. These form the DofF outlook for 2010 before incorporating any Budget 2010 changes.

The format in which the estimates are published is such that one cannot operate standard Adobe pdf features and requires by-hand copying of data in order to transpose the table into the Excel or any other database. One can only speculate why this is done by DofF, but any economist out there can probably wish that someone obliges the DofF to start publishing things in modern documentary formats and provide separate excel files suitable for analysis.

So here is the data with my own parallel estimates. As with DofF, my estimates do not include any promised or signaled ‘savings’ and ‘tax increases’ that might be announced in the Budget 2010. 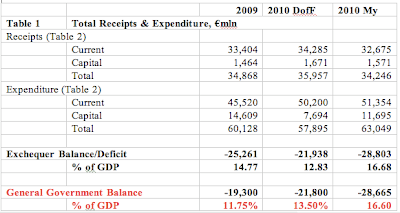 The above shows that DofF projects a rise in current spending next year of over €5bn, (higher social welfare and debt service costs). My projection is for a rise of under €6bn (because of even higher social welfare costs, plus an increase debt-raising fees, but no difference on DofF’s estimate of debt financing cost). Details are, of course, to follow below. 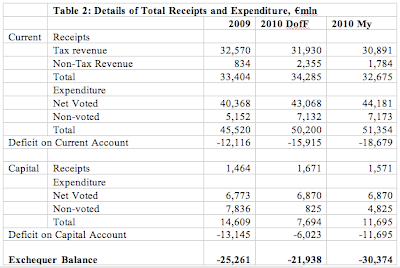 So what do these estimates (My v DofF) suggest: 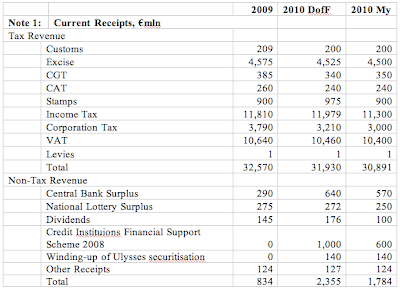 The differences between my and DofF estimates come from my view that:

All in, total Tax and non-Tax revenue will be lower by €1,039mln and €571mln respectivel

Next, let’s look at the detailed expenditure lines as stipulated above. 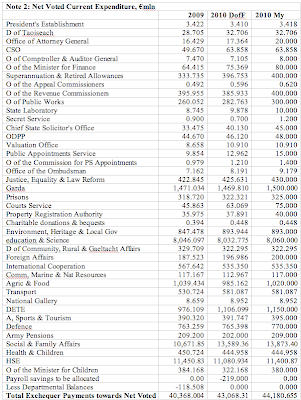 My main concerns (driving the differences to DofF estimates) are:

Net impact, I expect costs to rise by €1.1bn more than DofF does.

Details of non-voted current expenditure below: 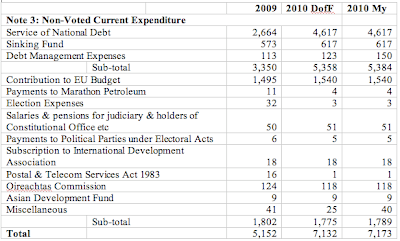 No major differences here between mine and DofF estimates. Unlike in the case of non-voted capital expenditure:

Of course, this table incorporates my view that Anglo and other banks will swallow some €4bn in 2010 in new capital. This already assumes that most of the funding for other banks will come via Nama issuing new Nama-own bonds that the Government will attempt to keep off its own balancesheet. Of course, this is a bogus accountancy trick, but let us entertain it as the Government insists we should.

This pretty much finishes my analysis of the Exchequer estimates. If the Government does not attempt to dramatically reduce its own spending in the next Budget, we might see our annual deficit rising to over 16% of GDP. Even if DofF is correct and the deficit will be 13.5%, this does not change the bleak reality that some 9% of this figure is a purely structural deficit. In other words, no matter what, we will have to shave off ca €15.4bn worth of spending in the next 2-3 years. No other way about it.

Posted by TrueEconomics at 10:23 PM

I have nothing to add on the economics of your post but I think your comment about data not being provided in a user friendly format is very true. Amidst all the talk of a smart economy it irks me that so many Government documents do not take advantage of basic IT tools such as having Tables of Contents that use hyperlinks.

A very interesting and very dark picture sir. I would go along with it. But only 4bn into the banks next year? We must be getting off lightly!

A wonderful post as usual. However, can I point out that by posting data in PNGs you commit the crime that you accuse others of.....

I should like to some work on the data myself. Any chance you can set a good example and pass on the 'raw' stuff....

Dear Arthur - would love to post in more interactive format, but I cannot figure out a way of posting readable pdfs or excel files on this page. All it allows for me to do is png or jpeg. One day - once richer - I will launch a website with more freedom to link data files... Of course, DofF have a website and an army of IT staff to go with it.