We hear often about the loss of competitiveness in Ireland over time. Can we illustrate it? And if so, what can we learn from it?

Here are the charts. Do keep in mind - higher values reflect lower competitiveness. 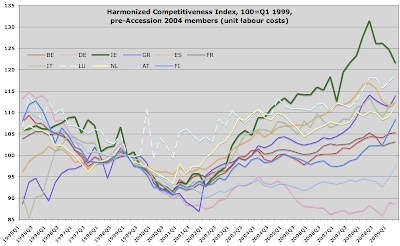 In terms of unit labour costs, Ireland has not been competitive relative to its peers within the EU15 since Q2 2004 when we crossed over the Netherlands. I ignore Luxembourg here as it is a statistical aberration. We've managed to lose all competitiveness gains incurred since Q1 1999 by Q1 2003. Majority of our peers have done so only 5 years later. while our competitiveness has deteriorated by a massive 22% since 1999 (and this is reflective of the significant gains in competitiveness over the course of 2008-2009), the average for peer countries was 6.2% and absent Ireland and Lux from the sample the rise was just 3%. 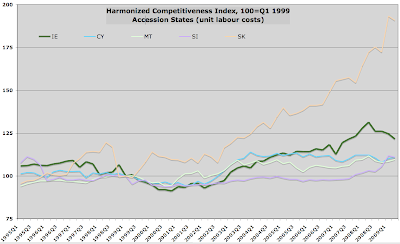 Chart above also shows that we have not posted a stellar performance against the latest additions to the Euro area. While Slovakia beats us hands down in terms of decline in competitiveness, remember - these are normalised series, so having started from a much lower cost basis than Ireland in 1999, they have been gaining significantly faster in terms of unit labour costs. Of course, notice that before 1999, Ireland was starting from a higher cost point in 1995 than Slovakia.

Is the cost of labour all there is to competitiveness? Well, no. 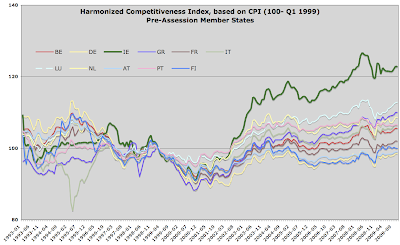 Consumer prices draw another comparative. But strangely enough, the picture is virtually identical. Except, here pre-1999, more specifically in 1993-1995 - we were performing really pretty well. Having gone off the rails slightly during the mad days of the IT bubble - end of 1996- end of 1998, we then again performed rather well in terms of CPI until things gone out of control for us in the end of 2002.

And just for completeness - a chart on the new entries into the Euro zone: 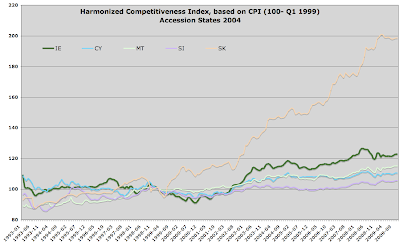 So what can we really learn from these four charts?


On a different train of thought: an interesting idea that can be explored in 2010. Can we use the proceeds from our carbon tax to supply a long-term economic stimulus to the private sector economy? Here is a thought going in the right direction.

Carbon tax in theory should be behavior-altering, so as consumers and producers reduce their emissions, the tax revenue should decline. To incentivise such behavior, carbon tax induces higher costs on energy use from non-renewable resources. But the revenue raised from the tax can be used to further enhance the incentives - if it is rebated back on the basis of lower emissions. This can also be done within a Cap-and-Trade system.

In the case of Ireland, such a system would involve the following:
The main advantage of the system is that it will allow to offset some of the regressive effects of the carbon tax:
Best of all - the Exchequer will not get to treat carbon tax as just another regressive tax revenue raising measures that will simply increase the cost of living and working in Ireland. Of course, those not in the tax net should also receive the deductions, implying that some of them will become net earners from the tax system. As long as they are not enjoying lower cost of overall energy-related expenditure courtesy of state subsidies.
Posted by TrueEconomics at 10:04 PM