Central Bank of Ireland has published new data series on Investment Funds in Ireland in December 2009. The data is reproduced in the table below with my analysis added:

This data, of course, covers IFSC-based funds which dominate (vastly) the entire sample. Overall funds issuance is up robust 16.6% (although activity on transactions side is falling - we cannot tell anything about seasonality here, as the CB just started collecting data). Real estate funds are out of fashion. Clearly so. Mixed funds and hedge funds are relatively flat and judging by the collapse in transactions are still in batten-the-hatches mode. Equity funds are in long-only mode, on a buying spree. Nice sign of renewed confidence in the global markets. Bonds funds are steady rising, albeit not at spectacular rates, which, of course, is a sign on IFSC missing on bonds over-buying activity going on worldwide.

Chart below shows how the market shares evolved over time.

ECB's latest (December 2009) financial stability report throws some interesting comparisons for Ireland. Focusing on the charts: first consider the extent of deleveraging going on in the financial systems: 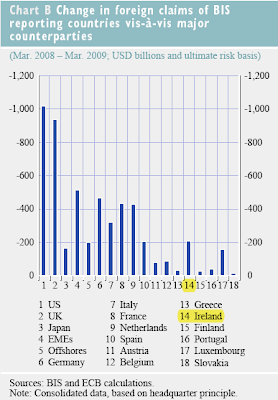 So the US leads, as per IMF GFSR, with most writedowns in quantity and relative to the system. The UK comes second. Emergent markets are catching up. Japan has much smaller problem, unless yen carry trades unwind dramatically. These are on track to complete writedowns in 2010. But EU states are lagging. Ireland's figures are skewed by IFSC institutions taking serious writedowns. But overall, we still have some distance to travel on domestic banks front.

Next chart shows just how advantageous our low profit margins on the lending side have been in terms of yielding lower burden of debt servicing. This can change very fast in the New Year as retail interest rates are bound to rise. No top-up mortgages here or car loans and personal loans secured against house assets, etc. And also note that these refer to the 2005 benchmark, plus, of course, these are percentages of gross income. Given our households are now faced with some of the highest income taxes in the Euro area, good luck sustaining this low burden into 2010. 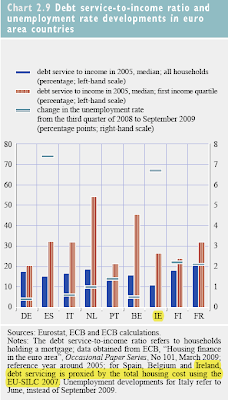 And another issue - notice how significant is the rise in burden for lower income households. Guess which households are also facing higher rates of unemployment? 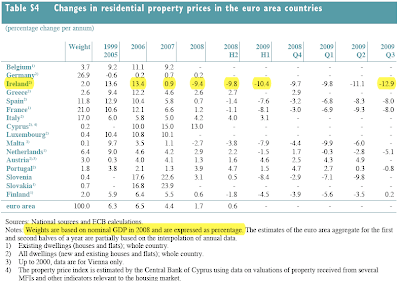 Table above shows the deterioration in house prices in Ireland relative to other countries. We are now 21.1% down on 2007 figures, or at 90.9% of 2005 level of nominal prices. The worst performance of all countries, including such bubble-lovelies as Spain. 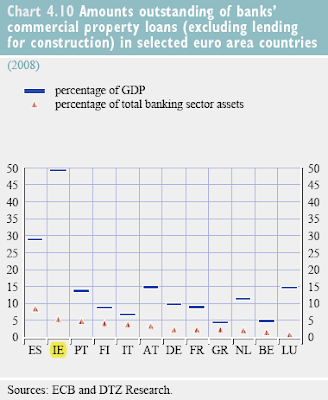 And on the commercial real estate side, we are an outlier by all measures (remember, unlike Spain, our total banking sector includes non-domestic banks as well). That is another mountain yet to be scaled in this crisis.
Posted by TrueEconomics at 11:24 AM