My favorite topic is back... travel figures. RTE reports on industry estimates of 12% fall off in the number of foreign tourists (not visitors) to Ireland (here). More interesting data is courtesy of Ryanair release (these guys really should win a transparency award for publishing the data that some parts of the public sector do not want us - the public - to know).


Dublin Airport’s seat capacity has slumped from 10 to 17 ranked in a league of EU airports this winter. The report, by RDC Aviation, also shows that Dublin Airport has suffered the largest capacity cuts of any of Europe’s 25 largest airports. This slump proves that the Govt’s €10 tourist tax has devastated Irish traffic and tourism in 2009 and disproves the Dept of Transport’s false claims that Dublin Airport’s traffic collapse is “an international phenomenon” (per Ryanair statement). 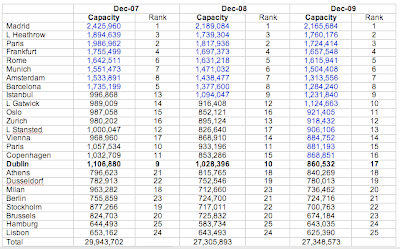 Notice that table above (reproduced from the RDC raw data) clearly shows that Dublin Airport traffic fall off in 2009 relative to 2007 is also out of line with other leading airports. Table below stresses this point: 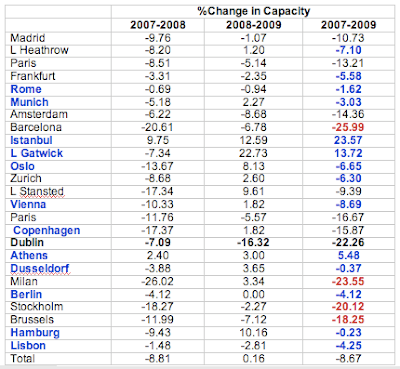 Notice airports that outperformed Dublin (in blue above) - all selected on the basis of their traffic similarity with Dublin - localized, regional traffic with smaller share of transit passengers for international connections.

Now, ANOVA for the above: while Dublin numbers changes do belong in the sample for 2008, the same is not true for 2009. This tends to support the argument that changes in Dublin capacity are not consistent with overall deterioration in economic conditions internationally.

So here we have it - another source of evidence to support 'Gurdgiev-Ryanair' conjecture that airport taxes and charges are undermining Irish airlines and travel sectors. Note - the fact that airlines are being hurt is evidenced by the fact that all major airlines present at the Dublin Airport - not only Ryanair, but also Aer Lingus, EasyJet and BMI - have made such a claim to the Government.

"First of all you have to consider the timing of the tax, to what extent does it coincide with the fall in numbers."

This is precisely what is addressed in 2007-2008 and 2008-2009 growth rates that I added to the data. Full impact of travel tax took place in 2009. Notice the discrepancy in the rates of decline at Dublin and the differences in the Anova table - they show that 2009 regime was completely different from the 2007 and 2008 regimes.

"Then you need to allow for any other taxes/charges in these other places and their change."

Actually, no - I do not need to do so. If other places had any change in their travel tax rates, there will be an effect on these airports in the first order, and on Dublin airport at the very best in the second order. The first order effect, I would assume, will be simply much larger. Furthermore, several airports on the list have lowered their charges and several governments have repealed their travel tax. I do not control for this precisely to err on the skeptics side. Re-weighting figures by removing from the sample those airports where charges and taxes were reduced in 2009 actually changes the Anova bands by less than 0.2 points, without altering the conclusions.

"And of course you need to control for any other factors that differentially impact on capacity which may or may not be correlated with the variable you are interested in."

True. But what these might be? Macro shocks are suggested. Ok, take the logic here - the figures are bi-lateral capacity. So, if, say, potential Italian tourists to Ireland were less adversely impacted by macro shocks, their propensity to travel to Ireland would be less adversely effected by income shocks. Since Ireland experienced the worst 'macro shocks' of the entire Eurozone, then the differences in macro shocks will act to improve traffic through Dublin Airport.

What other forces can be acting here? Higher airfares? Not really - Dublin offers some of the lowest airfares, net of taxes and charges in the EU15. And it is being compared against other full cost (not low cost) airports. So price effects, again, are acting to strengthen my argument, not to weaken it.

Optimally, an econometric exercise should be carried out, alas, two obstacles prevent this from being performed:
So we can wait for another 10 years to get the data sufficient to test causality (if we do get it - remember - Dublin Airport alongside Tourism Ireland and DofT are actively attempting to suppress public releases of data on tourism flows through Dublin). Or we can just settle for the second best - an Anova.

Finally, as in medicine, economic policy should always err on the side of upholding the principle of inflicting no harm. this means, that absent full analysis of economic feasibility, no tax policy change should take place. Can anyone point me to such analysis in the case of our travel tax?

Posted by TrueEconomics at 6:01 PM

There is a problem with your logic Constantin: well there isn't really any. So the fall in Dublin is bigger than many other places. There is a tax in Dublin. Ergo..nothing. First of all you have to consider the timing of the tax, to what extent does it coincide with the fall in numbers. Then you need to allow for any other taxes/charges in these other places and their change. And of course you need to control for any other factors that differentially impact on capacity which may or may not be correlated with the variable you are interested in.
For example we know that macro shocks have not been the same everywhere so you would expect income effects to differ.
As I am sure you know there are techniques for doing all this (remember those lectures on econometrics?). As it stands, you just have an anecdote. You may well be right but case not proven.

Happy New Year Constantin and STAY HEALTHY my friend. If you run for Irish President in 2010,
I'll vote for you. Ireland needs a man of your experience and intellect to guide us through the rough seas ahead.

Finally Constantin, I wish Brain Lenihan a speedy recovery from his illness.

Patrick, many thanks. I would join you with wishing Brian Lenihan a speedy recovery in 2010!